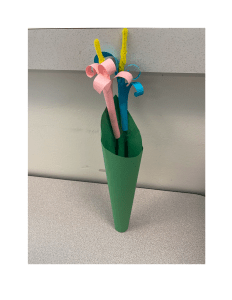 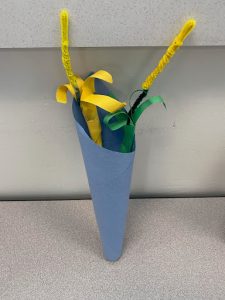 Doing the project with the students went well. The flowers and friendly letters the students made were super cute. The students also really enjoyed creating the gifts for the residents. I had the students create the paper flowers and friendly letters for the residents at the same time. I had to modify the zoom meeting and pictures from the Cheney Care Center. Unfortunately, there was not a time that worked to do the zoom call or pictures with the Cheney Care Center. Therefore, this part of the project did not work. The advice that I would give is that it is okay if everything does not turn out the way you planned it to. If the kids do not get to have the Zoom Call or pictures with the organization, the students will still be impacted by the project because they are still learning to give back to others.

Student Contributor -S. Benson
I’ve been working at Spokane Humane Society for over a year and was very excited to partner with them with this project. I wanted to show my placement students the benefits of donating to animals in need. I explained to them all the important aspects Spokane Humane Society offers to their adoptable animals. Students were very engaged, since who doesn’t love animals. 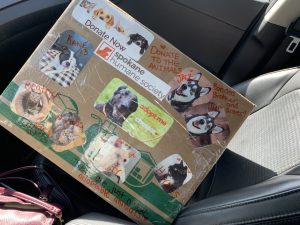 I started by telling students about how much I love working with and caring for the animals at Spokane Humane Society. I then provided students with the printout of Spokane Humane Society’s wish list and informed them that these donations can be new or used. Also, food, toys, blankets, and treats are not the only donation options. Included on the wish list is office supplies and cleaning supplies, these items help workers and volunteers provide exceptional service for the animals. For this project I decorated a donation box and included pictures of adoptable animals on the front. As well as a picture of Kane, a dog who was at the shelter for over a year before he found his forever home. By being able to donate new or used items to animals in need, students are given the opportunity to give back to their community and learn responsibility. Students were so excited to be able and provide things for shelter animals that one girl convinced her mom to sign them up for volunteering. Another young boy recently lost their family dog and brought in his old dog bed to donate. He mentioned that his family will be looking at Spokane Humane Society dogs to adopt when the time is right. 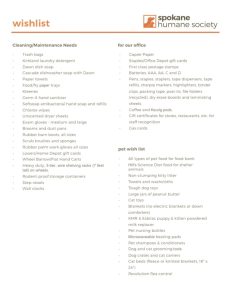 This project went great with my placement students, and they brought in amazing donation items for the shelter animals. Talking about some animals at the shelter who have medical issues and have been there for a while really pulled on the heart strings of some children. I informed them that adopting out animals with lifelong medical needs can be difficult. Also, I made sure students understand that donations can be new or used. Telling students this aspect is important and would be my advice for anyone trying to do the same project, because not everyone has access to buy new donation items.

Student Contributor -M. Russell
This organization, Soldier’s Angels, is something that allows everyone to support our soldiers in so many different ways. There are multiple different teams included in this organization include card and letter writing team, angel bakers team, chaplain support team, deployed adoptions team, ladies of liberty team, and special operations forces team. All of these aspects of the organization provide some kind of support and help for soldiers that might not get it from other sources. It shows the soldiers that they are loved and appreciated by a lot of people around them. For this project, I chose to register for the card writing team and send some letters from my kindergarteners to the soldiers.

After researching this organization and getting in contact with someone from the team, I finally got the chance to work with my students on what their job was. I started with a discussion of what a soldier is and all of the things that they do for our country, including how they protect us. I showed the students my example letter and helped them write out the message we decided to send which was “I am thankful for your service.” They then drew whatever picture they wanted to in the space above the words. They used lots of colors and got really creative with what they wanted to soldiers to receive. It was super cool to see the way the kids were so interested in this project and how happy they were that I was actually sending the letters. This idea is a quick and easy service for the community that can be done by anyone and everyone in the school. It is a way to show kindness to the people who protect us and it helps us give back in a way that can be forgotten sometimes. A simple letter can be so powerful for someone to receive, especially in hard times and from a young student they do not even know. 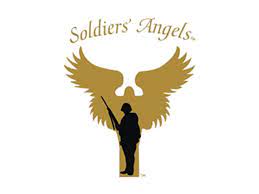 I thought the project went really well. The kids were super engaged in writing the letters and genuinely enjoyed the process, which was really cool to see. A lot of them took their time on their drawings and really wanted it to be something the soldiers were going to like. Most of the parts of my plan worked well, and I was happy to be able to do it with the whole group of students. There were a couple kids that I had to modify things for a little bit because they struggle with their writing, so they had to trace the letters that we wrote for them. It was good though because we still got to see their handwriting over ours. Another aspect of it that I would have liked to be more prepared for was introducing the topic and explaining the “why” of it all to the kids a little better. I would tell anyone that was trying to do this same project to allow your students to write whatever they want for the letter if you are in an upper grade level. Since I did this with a kindergarten class, it was a little bit harder to do this.

Student Contributor -katelyn pitzer
In this project, I had my students gather supplies for the Spokanimal animal shelter. The students gathered supplies over the month of February. Then I went and delivered the supplies to spokanimal. 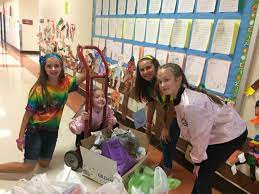 For the project, the students were given a newsletter in their mailboxes that went home to parents about how we can help our community. It explained we would be doing a supplies drive to help the animals at spokanimal. The students brought in supplies over the month of February and would get the privilege of bringing supplies down to the office where the supplies were stored when the class would get team points for being respectful and on task. This was a service to the community because it greatly helped sponanimal stay in business so that all the animals can go to a good home! It was powerful for the students because we know how much they love animals and they were so excited and happy to be able to make a difference in their community and help out the animals in need! 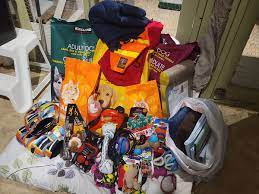 The project went really well! The students gathering supplies over the whole month of February worked great because it gave lots of time for students to get the information to parents/guardians and get the supplies back to the school. If I had more time I would try and plan a field trip to spokanimal for the students to visibly see the worker’s gratitude when delivering the supplies.

Student Contributor -A. McDonnell
This is a pencil drive for kids and families that simply cannot afford pencils or writing utensils. I partnered with Right to Write for the project. Education gets put on the “back burner” sort of speak for many people all over the world, providing food on the table can be hard enough and it comes down to it, they stop seeing schooling as a priority. This gives kids the opportunity that they didn’t see as possible before. 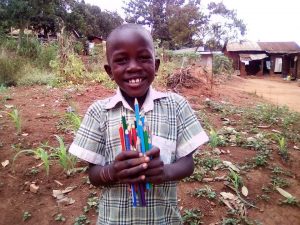 The third grade class I worked with held a pencil drive, we set a goal for 1,000 pencils. If the class reached this goal, they would get their very own pajama party for just their class. They also wanted to have an individual goal, so whoever brought in the most pencils got to be the “teacher for the day” where they sit in their teachers desk to do their work for the day, and the teacher sat in the students desk. I thought these were great goals for this project considering it didn’t cost anything to provide the prize, so they knew any money going into this drive was all for the pencils for the kids that don’t have them. The students got so engaged with this that we started reserving 5 minutes at the beginning of the day and the end of the day to count pencils and fill in our bar chart. We talked about all of the places these pencils could go, and how it would impact the recipients. I even had one student say “I will never think writing my name on my paper is silly ever again! Some kids don’t get to write their name on anything!”

I think that overall, my project went over well. The easiest way to send the pencils after all collected was into gallon sized zip lock bags, then into boxes. About 200 pencils can fit into a gallon bag just for reference!

Student Contributor -E. Mathieson
The Painted Wood Project was inspired by the Kindness Rocks Project having the same idea in mind, to spread kindness through the community. It evolved into painting wood pieces for the children to give to someone who they appreciate and has impacted their life in a positive way. The idea for the Painted Wood Project was to show love and kindness to someone who has shown it to you.

The Painted Wood Project was a way for students to create something for someone who has a made a difference in their lives, no matter how big or small. This project was created not only to spread kindness through the community but to spread kindness through the kids creating the Painted Wood. The kids laughed, smiled and were beyond happy to be given the opportunity to make something for someone else. Children are not often given the chance to be the ones to make a difference. Through this project you are able to show them that no matter their age they can be the ones to make a difference and create kindness and happiness in other lives. That is why this is a powerful project. And the people receiving the Painted Wood will also be able to feel the love put into it.

The project went very smoothly. All of the children enjoyed the project and they were all able to do it no matter what the age they were. Having a large group of kids that ranged in age I had to adapt how I presented the project. I had to simply the instructions to the basics and after still having lots of questions from the kids I simply told them, create whatever you want that you think will make your person happy. My advice for someone trying to do the project is let the students be in charge of their projects. They will create beautiful products because of it.