One of the biggest advantages that EWU Army ROTC has over most other ROTC programs across the country is the facilities we have.  When choosing an ROTC program facilities should be a key consideration because the better the facilities, the better their ROTC experience and training will be.  The training available to Cadets is important because it gives them an advantage over their peers when they attend Advanced Camp at Ft. Knox, Kentucky.  Below is a description of the various facilities that our Cadets will train at throughout the year.

A major facility advantage of EWU ROTC is that we have our own building compared to many other ROTC programs that have to share buildings with other departments.  Cadet Hall was constructed in 1954 by the U.S. Army Corps of Engineers specifically to house the EWU ROTC program.  Cadet Hall is located in a centralized location on campus with easy access from Washington Street that bisects the university.  The inside of Cadet Hall is expansive with the second floor being home to all the Cadre offices, classroom, conference room, and computer lab.

On the first floor of Cadet Hall is where our ROTC gym is located.  The gym has multiple bench presses, free weights, dumbbells, kettlebells, pullup bars, etc. for Cadet use.  The URC Fitness Center on campus can often get very busy which the ROTC gym provides Cadets an alternative fitness facility to workout at without the crowds.  Additionally each Cadet is assigned their own locker to store their workout gear and ROTC equipment.  The ROTC gym is open from 6 AM – 6PM each weekday. 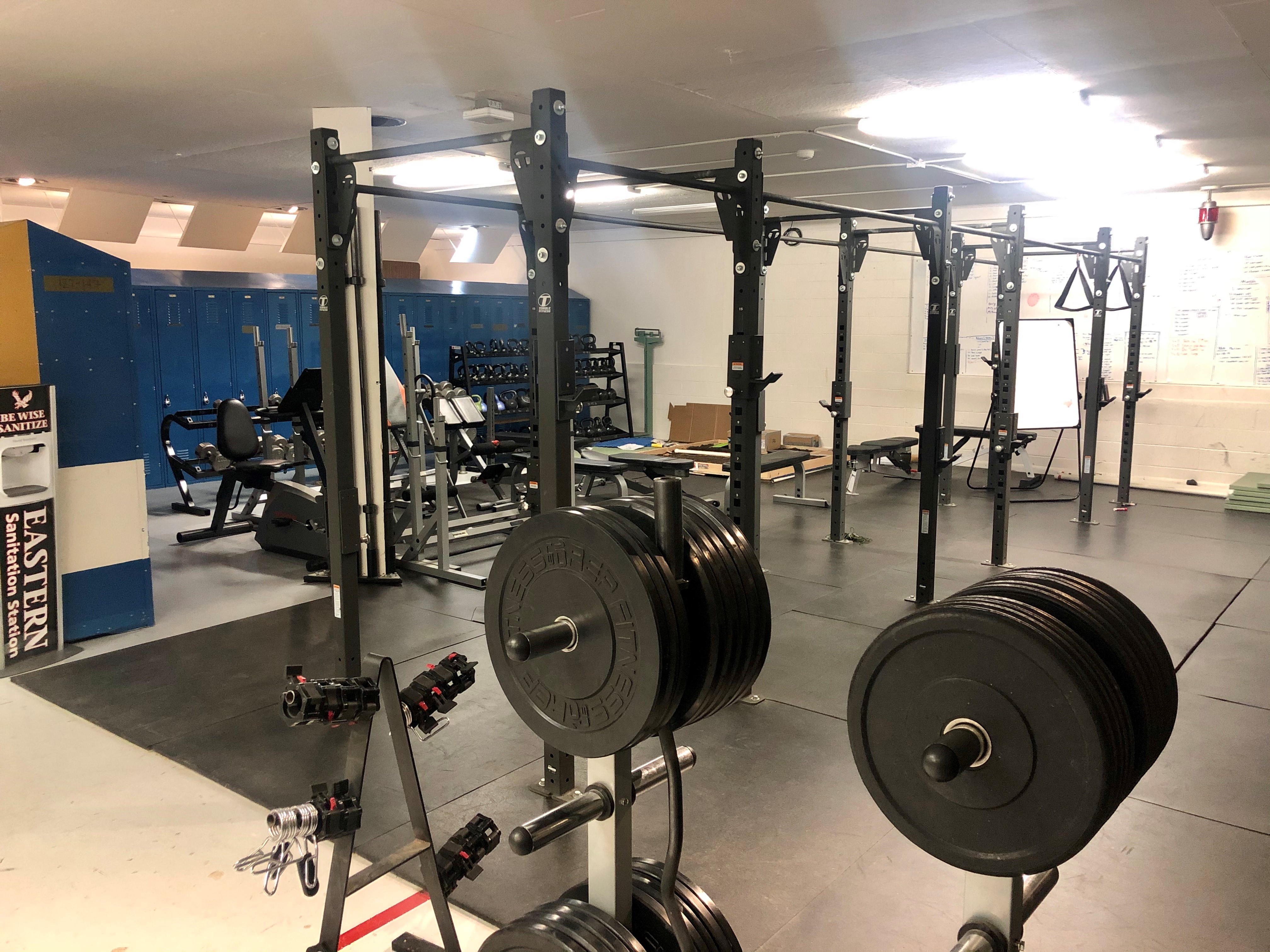 Another facility the Cadets have access to on the first floor is the Major General Kenneth Privratsky Range.  EWU ROTC has a long history of competitive shooting to include having two Olympic medalists.  Our indoor shooting range is where our rifle team trains at using competitive shooting air powered rifles.  For outdoor shooting our Cadets travel to Medical Lake to use the Department of Corrections Range which we have co-use agreement with.

During the Winter Quarter is when most of the morning physical training program for ROTC shifts over to the Fieldhouse located across the street from Cadet Hall.  The Fieldhouse is an extremely large indoor facility the includes its own track for our Cadets to train on.

Our Cadets regularly use Reese Court as a location to conduct stair training workouts during the winter months.  Reese Court also has its own indoor running track on the upper level our Cadets will use between conducting stair climbing workouts.

Another popular location for our Cadets to workout at during the warmer months is the famous red turf of the Inferno at Roos Field.  The stadium is home to the EWU football team, but in the early morning hours it often used by EWU ROTC to conduct physical training on its red turf, run around its track, and stair climb up and down it’s bleachers.  The parking lot adjacent to Roos Field is also where helicopters land to take Cadets out to Camp Seven Mile for training.

During each Fall Quarter the Fighting Eagles Cadets will conduct Combat Water Survival Test (CWST) in the EWU Aquatics Center. CWST is an event that every Cadet must pass in order for them to commission as officers.  The Aquatics Center in recent years has hosted events for the 2019 Ranger Challenge competition and the 2018 German Armed Forces Proficiency Badge (GAFPB) test.

During leadership labs that require a large amount of space to train Cadets, EWU ROTC has access to a property adjacent to campus called Montague’s Farm.  The rolling hills of the old wheat farm provides an outstanding location for the Cadets to learn Army squad and platoon level patrolling basics in an area with a high level of visibility.

The Columbia Plateau Trail State Park is a 130 mile long trail that begins at Fish Lake just outside of Cheney.  EWU ROTC uses this expansive trail to train Cadets to pass the 12-mile ruck march with 35 pounds on their back that they must pass at Advanced Camp.  This trail was also used for the ruck march event at the 2019 Ranger Challenge competition.

Fish Lake is a 67 acre lake located 5-miles outside of Cheney.  This is where our Ranger Challenge team each year goes to, to train for paddling events.  The lake was also another location used during the 2019 Ranger Challenge competition.

After the Cadets become proficient in their basic skills by training at Montague’s Farm, they then begin conducting training at the Cheney Waterworks located adjacent to Cheney and the Turnbull National Wildlife Refuge.  The waterworks property is a heavily forested area that allows the Cadets an opportunity to practice their patrolling skills in an environment with limited visibility due to the vegetation and terrain.

The premier training location for EWU ROTC is the Camp Seven Mile property located within the boundaries of Riverside State Park just north of Spokane.  The old military property is maintained by the Washington State Park service and made available to military units in the Spokane region to use for training.  The property is expansive and provides Cadets a huge wooded area and hilly terrain to conduct large unit training at to prepare them for Advanced Camp.