EWU Army ROTC is committed to educating Cadets on the Army’s Sexual Harassment/Assault Response and Prevention program, known as SHARP.  This program exists so the Army can prevent sexual harassment and sexual assaults before they occur. This is achieved by creating a climate of dignity and respect for every Cadet in the Army ROTC program.

Sexual assault is a crime and if an EWU Army ROTC Cadre member learns of a sexual assault they are a mandatory reporter to both the EWU Title IX office and the Army.  We highly encourage Cadets to report SHARP incidents to their Military Science faculty member so perpetrators can be held accountable.  Faculty phone numbers can be found at this link. Cadets can also report any SHARP incidents to the Title IX office or the local police department.

An outside resource for Cadets is to contact the 8th ROTC Brigade Sexual Assault Response Coordinator or Victim Advocate located at Joint Base Lewis-McChord with any questions they may have about reporting a SHARP incident.  Finally the U.S Army Cadet maintains a 24/7 helpline for Cadets to contact as well: 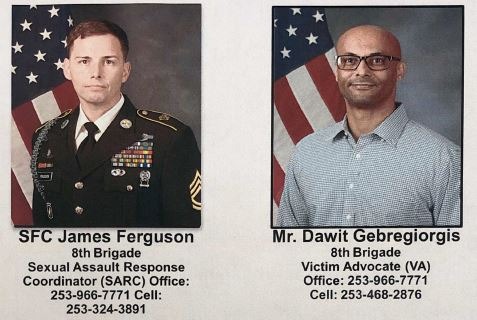 Sexual harassment and sexual assault are inconsistent with Army Values and will not be tolerated in the Fighting Eagles Battalion.  The EWU Army ROTC Cadre will continue to be engaged on this important topic to help maintain a climate of dignity and respect that all of our Cadets deserve.