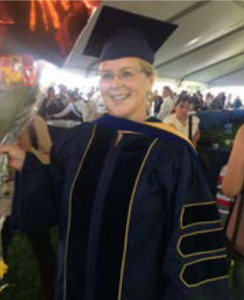 Dr. Cheryl Dykstra-Aiello was selected into the EWU McNair Scholar Program in 2010, and completed two McNair summer research internships in conjunction with the Eastern Washington University Department of Biology. Working with biology professor and McNair faculty research mentor, Dr. Karen Carlberg, her research focused on sex and age differences in the effects of exercise on pain sensitivity.

A "proud Eagle alum," Dr. Dykstra-Aiello graduated from EWU in 2012 with a Bachelor of Science in biology, then went on to earn her PhD in Molecular, Cellular and Integrative Physiology at the University of California at Davis in 2017.

Her doctoral dissertation focused on blood gene expression in stroke patients, research she has continued in her recent publication in Frontiers in Neurology:  Alternative Splicing of Putative Stroke/Vascular Risk Factor Genes Expressed in Blood Following Ischemic Stroke Is Sexually Dimorphic and Cause-Specific. 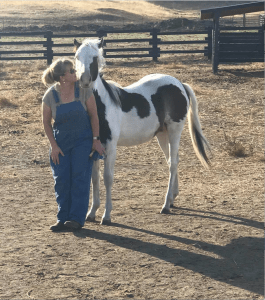 After earning her doctoral degree, Dr. Dykstra-Aiello followed her heart back to Eastern Washington to complete postdoctoral research training in the Krueger sleep laboratory at Washington State University.

She is currently an Assistant Research Professor in Washington State University's Integrative Physiology and Neuroscience Department of their College of Veterinary Medicine, where she continues her research in the connection between sleep, stroke and the immune system.

When not in the lab, she enjoys being outdoors, working in her garden and spending time with her family, which in addition to husband and son, includes an array of fur babies. She is pictured at right with "Baby Bo," a registered paint horse who is a year-and-a-half old. 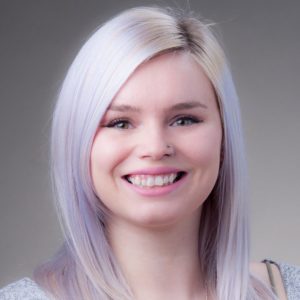 Christina Ramelow, MS obtained a Bachelor of Science in Biology with an emphasis in molecular biotechnology and a minor in chemistry from Eastern Washington University (EWU) in spring of 2018. During her time as an undergrad, she participated in the Ronald E. McNair Post Baccalaureate Achievement Program and the NSF S-STEM Scholar Program where she first discovered her passion for biomedical research during her first research experience. In fall 2016, her interests expanded when she began research with Dr. Ochoa-Repáraz.

Their team focused on the role of the gut microbiota regulating central nervous system (CNS) inflammatory demyelination using a mouse model of multiple sclerosis. In 2017, she was selected into the McNair Scholars Program, where in her summer research project with McNair, she investigated whether disease increased intestinal permeability, which would constitute a mechanism of inflammation in EAE. As an undergraduate, she found a passion for biomedical research, outreach and mentoring, which she expanded upon as an Eastern biology graduate student.

In spring of 2020, she earned a Master of Science in Biology at EWU focusing on the neuroprotective mechanism of an isoprenol known as farnesol on an animal model of multiple sclerosis. She was selected as the 2020 “Outstanding Graduate Student” for EWU’s CSTEM.

As Eastern's McNair Summer Seminar Series continued on-line in summer 2020, Zoom allowed us to coordinate workshops and seminars with experts from around the country, and we were lucky to have Christina Ramelow present the following workshops from Michigan (on her way to begin her neuroscience PhD program at Emory University in Atlanta, GA)

Currently, Ms. Ramelow is a first-year neuroscience PhD student at Emory University. Her research interests include understanding neuro-immune and neuroinflammatory processes, elucidating the cellular and molecular pathways that govern diseases of the nervous system and designing novel treatments for neuropathologies. Her academic and career goals are focused on developing skills to be a well-rounded researcher, mentor and future professor.

For more info about Christina, please click this link to her EWU McNair page.

Making a Poster Presentation for a Scientific Conference:

How to Apply for the NSF Graduate Research Fellowship GRFP: 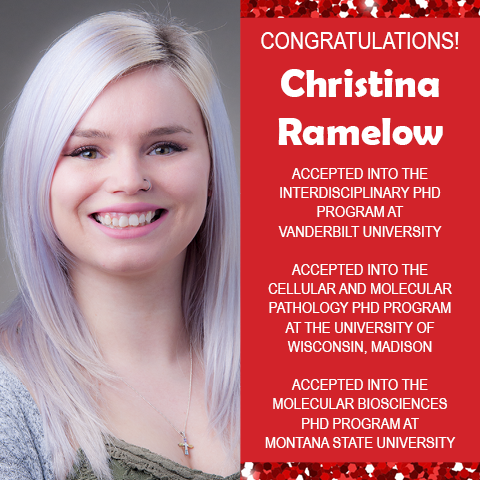 Photo of EWU Scholar Christina Ramelow next to red background with white text congratulating her for acceptance into multiple PhD programs.

Congratulations to EWU McNair Alumna Christina Ramelow! Christina has been accepted into the Interdisciplinary PhD program at Vanderbilt University, the Molecular Biosciences PhD program at Montana State University, and the Cellular and Molecular Pathology PhD program at the University of Wisconsin, Madison! This is in addition to prior acceptances at 7 other PhD programs. She is currently a master's candidate at EWU focusing on the neuroprotective mechanism of an isoprenol known as farnesol on the animal model of multiple sclerosis. She is particularly interested in understanding neuro-immune and neuroinflammatory processes, elucidating the cellular and molecular pathways that govern disease and designing novel treatments for neuropathologies.

Christina graduated from Eastern Washington University in 2018 with a degree in Biology/Biotechnology. As a Masters in Biology student, Christina has worked as a graduate student assistant in the EWU McNair office, a research fellow, and a teaching assistant. Christina is invested in mentoring and supporting underrepresented students in higher education and STEM fields and participates in groups and events to encourage inclusiveness in students and faculty. To prepare for graduate school Christina completed two summers of research internships as well as presented her research at several conferences. To read more about Christina and her research, check out her page on the EWU McNair website.

We are so proud to see all of Christina's hard work paying off and excited for her next steps towards attaining a PhD! 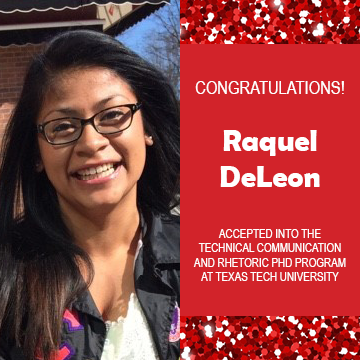 Photo of Raquel DeLeon next to red confetti backdrop and text congratulating her.

Congratulations to EWU McNair Alumna Raquel Deleon! Raquel has been accepted into the Technical Communication and Rhetoric program at Texas Tech University. Additionally, she received has received full funding, including a scholarship that waives out of state tuition. Raquel graduated from EWU in 2016 with a BA in Psychology. Through her summer research internship with the EWU McNair Scholars Program, Raquel researched the long term effects of childhood trauma on shopping behavior under the mentorship of Dr. Deanna Trella. To read more about Raquel's research, check out EWU McNair's 2016 Abstract Journal, page 15.

Raquel went on to earn her MA at EWU in English with an emphasis in Rhetoric and Technical Communication, and a Certificate in the Teaching of Writing. She worked in the Writing Center and taught both composition and technical communication at Eastern. For the last two years, Raquel has worked at Kalispell Regional Healthcare, under the Behavioral Health department. She worked alongside a licensed therapist to provide school-based mental health services to qualifying youth in Whitefish Middle School through the Comprehensive School Community Treatment (CSCT) Program. On top of all her work and applying to graduate school, Raquel recently gave birth to a beautiful baby boy Dominic! Congratulations and welcome to the world Dominic!

We are so proud to see all of Raquel's hard work paying off and excited for her next steps towards attaining her PhD! 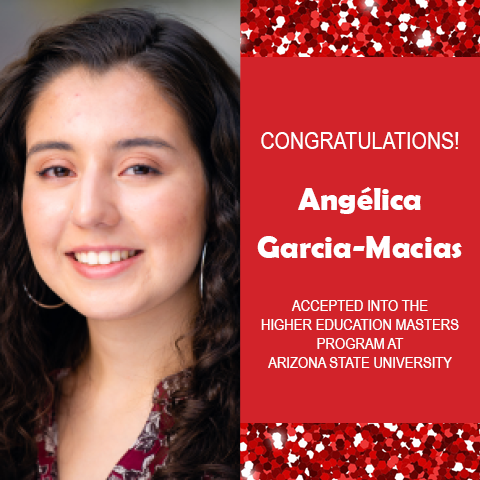 Photo of Angélica Garcia-Macias next to red confetti backdrop and text congratulating her.

Congratulations to EWU McNair Scholar Angélica Garcia-Macias! Angélica has been accepted into the MA in Higher Education program at Arizona State University. This is in addition to three prior acceptances to PhD Political Science programs across the country! Angélica is a senior at Eastern Washington University majoring in Political Science and minoring in Chicano Studies and Spanish. To prepare for graduate school Angélica completed two summers of research internships: one through the EWU McNair Scholars Program with mentor Dr. Martín Meráz García researching housing discrimination in the Latinx community, and last summer at MIT with Dr. Charles Stewart III researching the Latiné vote. To read more about Angélica and her research, check out her page on the EWU McNair website.

We are so proud to see all of Angélica's hard work paying off and excited for her next steps towards attaining a PhD! 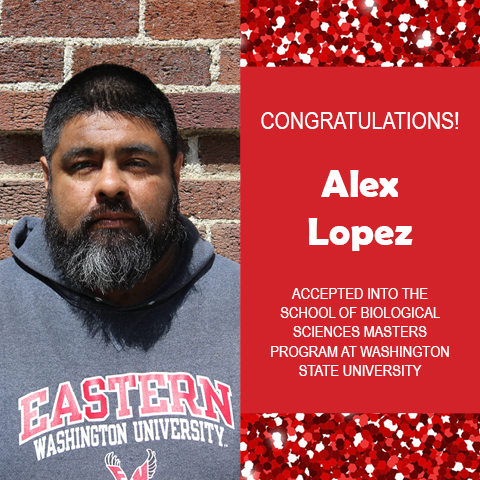 Photo of Alex Lopez next to red confetti background and text congratulating him.

Congratulations to EWU McNair Scholar Alex Lopez! Alex has been accepted into the School of Biological Sciences Master of Science program at Washington State University with full funding! Alex is a senior at Eastern Washington University majoring in Biology with a focus on fish and wildlife management. To prepare for graduate school Alex completed an EWU McNair summer research internship with mentors Dr. Margaret O'Connell and Dr. Paul Spruell. To read more about Alex and his research, check out his page on the EWU McNair website.

We are so proud to see all of Alex's hard work paying off and excited for his next steps towards attaining a PhD!