The Eastern Washington University (EWU) U.S. Army Reserve Officer Training Corps (ROTC) battalion is pleased to announce that one of its Cadets, Patrick Coleman has been awarded a Minuteman Scholarship worth $46,200. 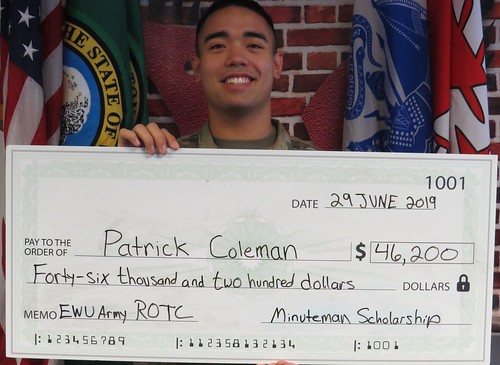 Cadet Coleman who is originally from Spokane, is a sophomore studying Finance at EWU.  He has excelled in the classroom by maintaining over a 3.5 Grade Point Average and shown strong leadership potential as a Cadet in the ROTC program.  Besides being a Cadet, Patrick also serves in the U.S. Army Reserves with the 659 Engineer Company located at Fairchild Air Force Base.  After graduating from EWU, Cadet Coleman will commission as a Second Lieutenant into the U.S. Army Reserve.

Congratulations to Cadet Coleman on being awarded the Minuteman Scholarship!