Protection Provider is a FREE program brought to you by Counseling & Wellness Services! This service is for students living in the residence halls. You can order condoms and other barrier devices to be delivered discreetly right to your mailbox!

Goals of the program:

Are you Ready to Order?
Take a moment to learn about what available options are best for you.

Browse our FAQs and resources below for more information:

Why is this Needed? Expand

How Does it Work? Expand

Any EWU student that lives in a Residence Hall on campus can order condoms for FREE!
Your Protection Provider Pack will arrive discreetly in your residence hall mailbox, typically within 5-7 days after your order is placed.

*This service will not operate during breaks (winter break, spring break, and summer break) or weekends.

What is Available? Expand

Each Protection Provider Pack will come with up to five products chosen by YOU! Students can browse our options to see what will best meet their needs and choose from the following:

How Do I Place an Order? Expand

Fill out our request form with your chosen items. You'll receive a confirmation email and your pack will arrive discreetly in your residence hall mailbox.

Who Will Know I Placed an Order? Expand

All orders are received by staff in the Health, Wellness & Prevention Services office. Our office’s services are private, and we will not share information about students’ utilization of Protection Provider with parents, academic advisors, professors, or anyone else outside of our office.

What is Consent? Expand

Consent is an agreement between participants to engage in sexual activity. Consent is about communication and should happen every time. Consent means actual words or conduct indicating freely given agreement to the sexual activity. Consent cannot be inferred from silence, passivity, or lack of active resistance. There is NO consent where there is a threat of force of violence or any other form of coercion, intimidation, deception, physical or psychological.

This video illustrates a variety of ways you may or may not obtain consent.

Rules of Consent
Consent is about everyone involved in a sexual or possible sexual interaction.

How NOT to ask for consent (Examples)
“I want you so bad”
“You know how much I like this?”
“But we already started…”
“But you said you would”
“You’re okay, right?”

All STDs are preventable, so it is important to protect yourself and your partner(s) if you’re having sex.

STD rates are up across WA state and nationally among persons aged 15-24:

Below is brief information on the most common STDs, but not an extensive list of all possible sexually transmitted infections.

Chlamydia: is the most commonly reported STD in the United States; affecting females age 20-24 the greatest. Most chlamydia is asymptomatic (no symptoms), but if left untreated can cause pelvic inflammatory disease, infertility, ectopic pregnancy, and chronic pelvic pain. Urine test is often used to test for chlamydia and treated with a prescription antibiotic. It can be prevented with proper and consistent use of barrier devices.

Gonorrhea: is transmitted through sexual contact with penis, vagina, mouth or anus of an infected partner. Ejaculation does not have to occur for gonorrhea to be acquired. Gonorrhea is often asymptomatic (no symptoms), but if left untreated can cause infertility in women and men and spread to other parts of the body. Urine test if often used to test for gonorrhea and treated with a prescription antibiotic. It can be prevented with proper and consistent use of barrier devices.

Herpes: Genital herpes is a common STD that any sexually active person can get. Most people don’t have symptoms but can still spread to their sexual partners. It is also possible to get genital herpes if you receive oral sex from a partner who has oral herpes. There is no cure for herpes, but medications can help prevent or shorter outbreaks. It can be prevented with proper and consistent use of barrier devices.

HIV/AIDS: Human immunodeficiency virus (HIV) destroys the important cells in the human body that help fight disease and infection. HIV is spread through sexual contact, sharing needles to inject drugs, and mother to baby during pregnancy, birth or breastfeeding. AIDS is the most severe phase of HIV infection. Currently there is no cure for HIV or AIDS, but medication has advanced and can help people with the virus live longer. It can be prevented with proper and consistent use of barrier devices.

ALL EWU STUDENTS taking at least 6 credits are covered for STD testing through their comprehensive health fee. Students can receive services at any family clinic Multicare Rockwood in Spokane County. Show your Eagle card. Laboratory tests covered include:

**Prescription antibiotics to treat STDs are not covered through the comprehensive health fee and will be billed to private insurance or responsibility of the patient.

ALL EWU STUDENTS taking at least 6 credits are covered for reproductive health through their comprehensive health fee. Students can receive services at any family clinic Multicare Rockwood in Spokane County. Show your Eagle card. The following covered services include:

**Obstetrical services, birth control, other medications and treatments are excluded unless otherwise specified.

Do you have any questions, concerns, recommendations, or other information you'd like us to consider? We would love to hear from you!

Keep it safe tonight Eagles on First Thursday! #be 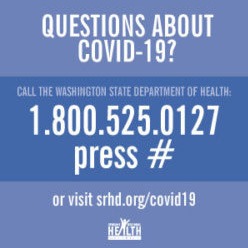