You are here: Home / Archives for land navigation

On March 5th through the 7th, Eastern Washington University (EWU) Reserve Officer Training Corps (ROTC) “Fighting Eagles” battalion conducted their second Field Training Exercise (FTX) of the 2019-2020 school year.  The purpose of this FTX was to test the Cadets knowledge of squad and fire team operations in order to prepare them for Cadet Summer Training or CST. The training started on March 5th with the conduction of the FTX prep lab. This lab was used to jump start Cadets’ minds into thinking tactically for the upcoming challenges. This was done by having each squad conduct pre-combat checks and pre-combat inspections (PCCs and PCIs), as well as solidifying Standard Operating Procedures (SOPs) and lastly taking a quiz on basic individual and squad information.

On March 6th Cadets arrived at Cadet Hall on EWU campus around 1400 in order to get any last-minute packing or planning done.  They had an hour to complete all these task before the buses came and brought them to training site Water Works where they conducted the day and night land navigation courses.

The third and last day of the Field Training exercise was the longest day of them all with the Cadets’ day starting at 0400.  After accountability and pre-combat checks, the Cadets were issued their M4 rifles and M249 machines plus blank ammunition for the FTX. Using real rifles with blank ammunition adds greatly to the realism of the training event.

the Cadets assembled at the Cheney Waterworks Training Area for squad training lanes.  At last year’s Winter FTX the Cadets trained in challenging wintry conditions with deep snow covering the training site.  This year the weather would be different, but still have challenging conditions with a persistent cold rain for nearly the entire day.

There were five lanes that the MS-III Cadets were tested on; the first was movement to contact, which the squad leader was informed that enemies were in the vicinity of a certain area. It was their job to plan a patrol in which they would take contact with the enemy and neutralize them using a pre-established battle drill. The second lane was a squad area defense. This helped the Cadets properly set a defensive position and learn how to utilize terrain to their advantage while being attacked by an enemy.

The third lane was a squad attack, which is similar to the movement to contact lane, but the precise enemy location is known, and it is the squad’s goal to initiate contact first. The fourth lane was squad ambush. In this scenario the enemy was known to have high foot traffic through a certain area, the Cadets were to cut them off by a certain time in order to minimize the enemy’s presence. The last lane was squad recon. Cadets were told that an unknown number of enemies were holding a position. The squad leader was then told to gather information on the enemy in order to solidify their numbers and possible intent. They did this by sending out recon and surveillance teams as well as security and observation. The recon and surveillance team’s job was to get eyes on the enemy from multiple vantage positions in order to gather intelligence; all while not being seen.

With freezing cold temperatures and constant missions, the EWU ROTC Cadets where tested both physically and mentally during the Winter FTX. This training is used to prepare our MS-III Cadets for Advance Camp at Ft. Knox, Kentucky this summer. Advanced Camp is a requirement for all MS-III Cadets to pass in order to commission as Army officers. The 37-day Advanced Camp is why the Fighting Eagles battalion conducts challenging training to prepare the MS-III Cadets as much as possible to excel at camp.

Note:  You can see and download many more pictures from the Winter FTX from our EWU Army ROTC Flickr page.

Once at the Cheney Waterworks Training Area, the Cadets immediately began their first training event of the Winter FTX, a daytime land navigation assessment.  Cadets were given four grid locations that they then had to plot on their maps and then use their compasses and pace counts to navigate to.  The land navigation course was meant to be significantly more difficult than past lessons by having points significantly farther apart from one another so Cadets were forced to put more thought into planning a route.  To pass the daytime land navigation assessment the Cadets had to find at least 3 of the 4 points they were given.

The course challenged the Cadets’ land navigation fundamentals that they have learned throughout the academic year at leadership labs.  After eating a dinner consisting of Army Meals Ready to Eat (MRE) the Cadets waited until dark to begin the night land navigation assessment which would prove to be even harder.  For this assessment each Cadet was given 3 points to plot on their map and navigate to in the darkness.  Each Cadet had to successfully find 2 of the 3 points to pass the test.

Note: More pictures from the 2020 Winter FTX can be seen at our Flickr page link.

On October 31st, the Eastern Washington University (EWU) Reserve Officer Training Corp (ROTC) “Fighting Eagles” battalion conducted its third and final land navigation course for preparation for the upcoming Expert Fighting Eagle Badge test. The land navigation course was meant to be significantly more difficult than past lessons so leadership could assess the Cadets land navigation skills. In order to make the course more difficult, Cadets were encouraged to work alone so they could see where they are truly at. The course also had points significantly farther apart from one another so Cadets were forced to put more thought into planning a route.

Cadets were truly put to the test. Many Cadets were seen using various land navigation fundamentals to change their route to the next point or just making sure they are at the point in accordance to the map. When asked about how the course was compared to previous ones, Cadet Caleb Bullard said, “This one was a real challenge, it felt more like a test rather than a lesson.”  Bullard also said, “I had a rough time, but was happy to see what I needed to work on.”

When the land navigation course ended a contracting ceremony was held for Cadet Crystal Cruz.  By contracting, Cadet Cruz after graduation will commission as Second Lieutenant in the United States Army.  As a contracted Cadet, she will also receive a $420 a month stipend and a $5,000 bonus for completing ROTC Basic Camp this past summer.   We are so excited for Cadet Cruz and her future in the United States Army!

The lab was held in the wide open Palouse landscape east of the EWU campus.  The rolling Palouse terrain makes for perfect conditions to teach basic land navigation to Cadets.

Below are pictures from the basic land navigation lab: 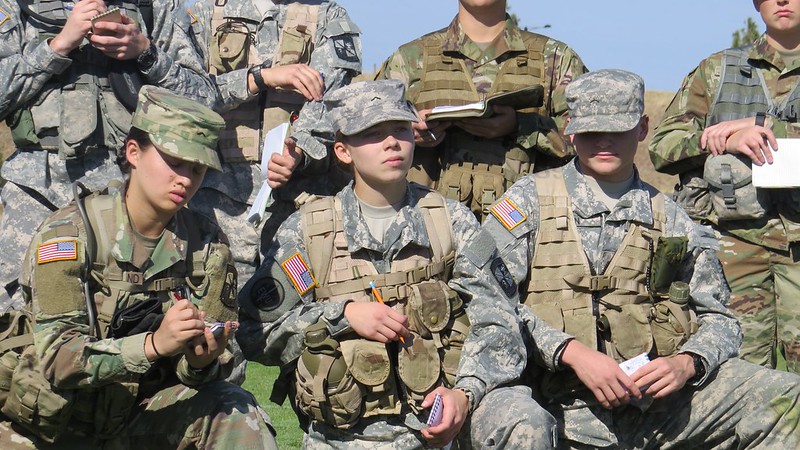 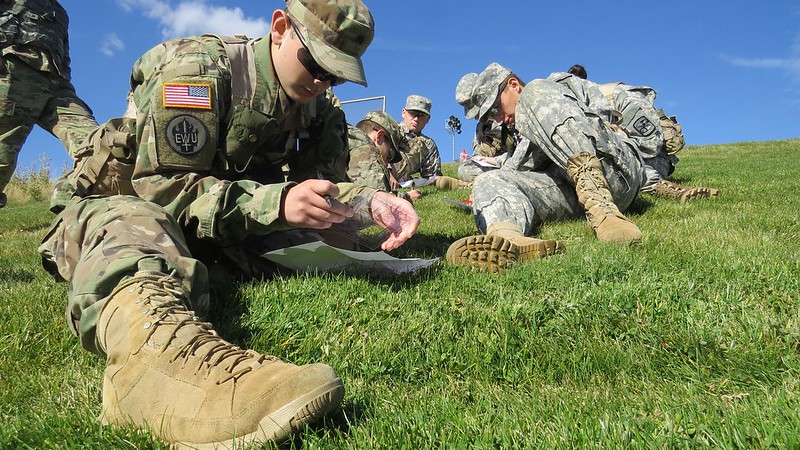 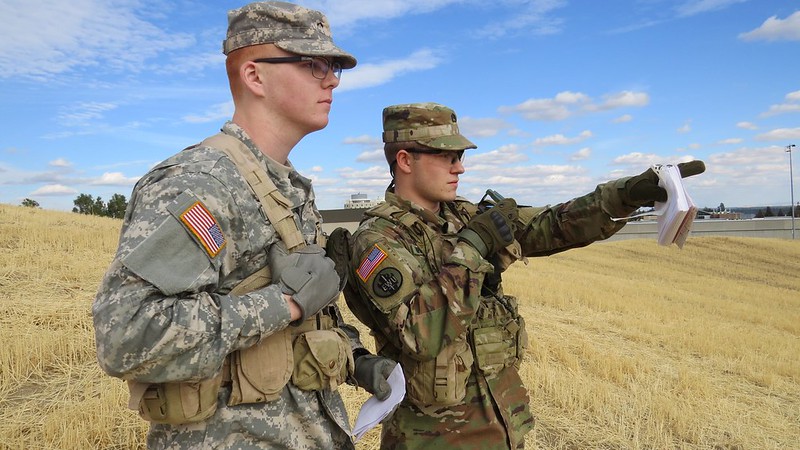 Cadets Everett Kuhnel (left) and Austin Bristow (right) use their compass to navigate towards their next point. 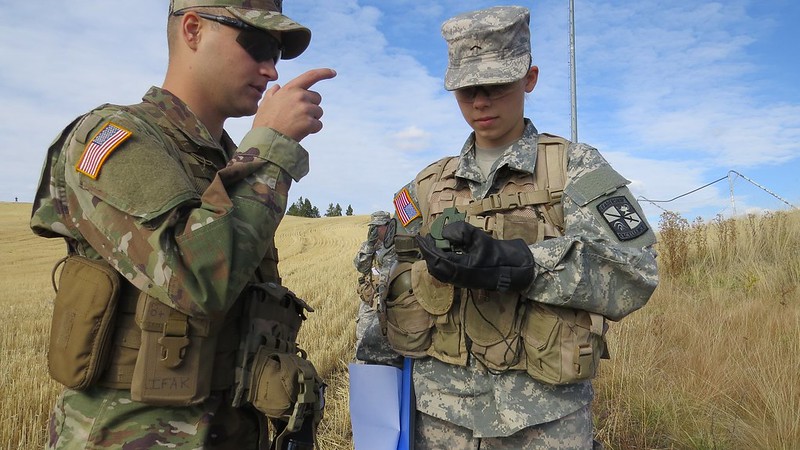 Cadet James Tallakson (left) provides instruction on how to properly use a compass to Cadet Isabell Erickson (right). 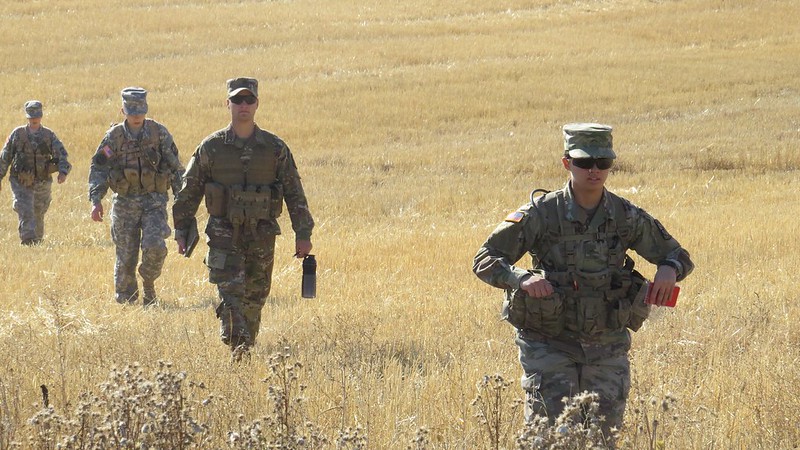 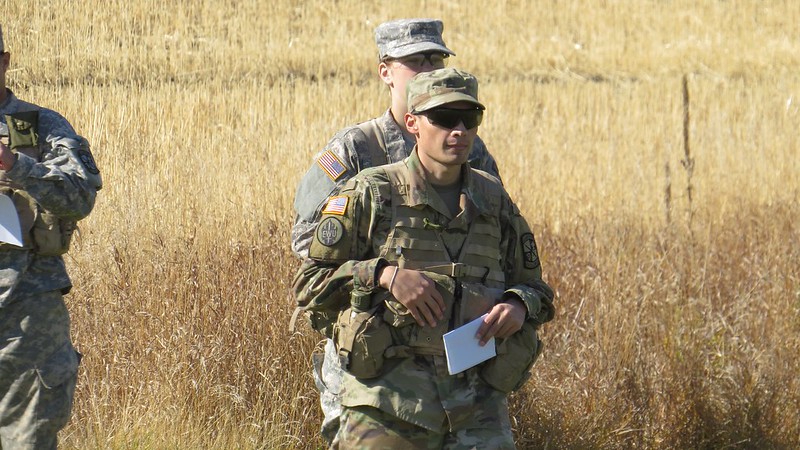