You are here: Home / Archives for Jump Start

The first thing the new Cadets did for Jump Start was move into the dorms.  Other Cadets were on hand to help parents and the new Cadets move into their rooms.  A major benefit of Jump Start was that the new MS-1 Cadets were able to move a few days prior to the rest of the student body.  After moving into the dorms, the Cadets then conducted administrative inprocessing into the ROTC unit followed by a pizza dinner provided by the Military Science Department.

After a successful first day, the second day of Jump Start began with the Cadets conducting team building exercises and then being issued their gear.  In the afternoon the Cadets were given classes in map reading, uniform standards, and military customs and courtesies.  All the classes were taught by MS II-IV Cadets in the ROTC program.

On the third day of Jump Start the Cadets woke early and executed their very first physical training (PT) session.  The new Cadets were taught by the more experienced Cadets on how to properly conduct military exercises.  They then went on a short run around the EWU campus. After PT the Cadets then prepped to deploy to the field to conduct more initial training.

By lunch time all of the Cadets were out at the Camp Seven Mile training area which is part of Riverside State Park north of Spokane.  For lunch the Cadets got to experience their first ever Meal Ready to Eat (MRE).  Following lunch the Cadets were taught individual movement techniques, land navigation, and how to throw grenades.

The Cadets were also able to tour a UH-72 Lakota helicopter flown in by Soldiers from the Washington State Army National Guard. The National Guard officers provided an overview brief about the helicopter, allowed Cadets to get inside of it, and answered questions about being an officer in the National Guard.

We also had a couple of special guests come out to Camp Seven Mile to see the Cadets train, the Associate Dean of the College of Social Sciences, Dr. Vernon Loke and the EWU videographer, Mr. Eric Galey.

On the final day of Jump Start the Cadet woke up early in the morning at Camp Seven Mile and ate another great MRE meal for breakfast.  After breakfast they then departed to conduct their first practical land navigation exercise.  Partnered with other Cadets, plotted grid points and then walked and found the points in the surrounding forest.  After completing the land navigation training the Cadets then deployed back to the EWU campus where they then participated in a luncheon with their parents and the ROTC Cadre. 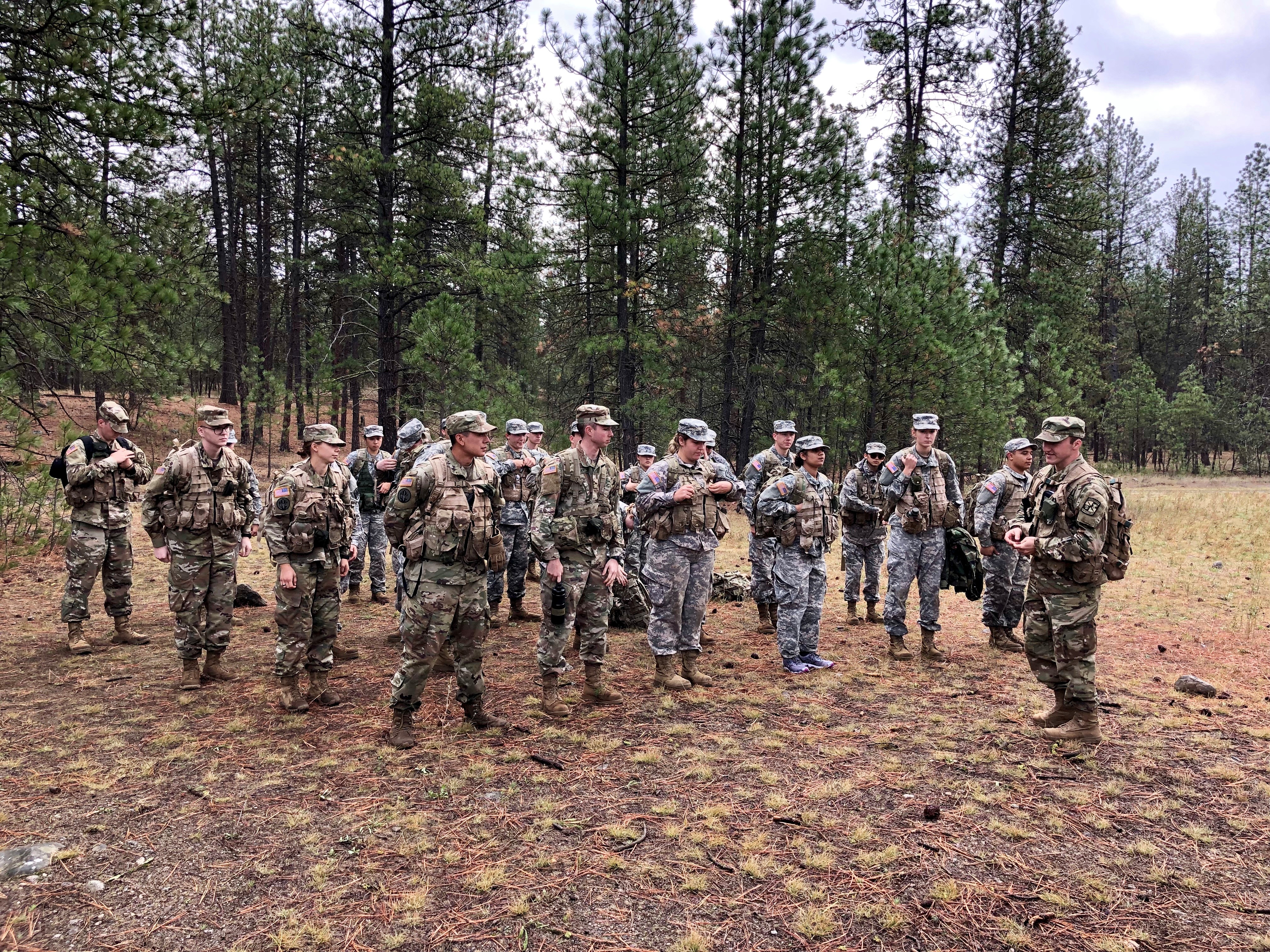 Despite some dreary weather, Jump Start 2019 was still a great success. All the new MS-1 Cadets were able inprocess, move into their dorms, become familiarized with Army physical training, and conduct basic Soldier skills training.  We wish all of our new EWU Army ROTC Cadets a great upcoming school year as they start down the path towards becoming Army officers.

The Eastern Washington University (EWU) Reserve Officer Training Corps (ROTC) Jump Start 2018 was a great training event for all the first year Cadets that participated.  A major highlight of Jump Start was the participation of a UH-72A Lakota helicopter during the field portion of the training.  A short video featuring the Lakota helicopter and its crew can be viewed below:

The EWU ROTC program gives a big thank you to the National Guardsman who are part of Charlie Company, 1-112th Aviation Security and Support based out of Fairchild AFB, WA for supporting Jump Start 2018.

The purpose of the five day event is to inprocess first year Cadets, settle them into their dorm rooms, introduce them to Army physical fitness, and conduct initial soldier skills training.  The first day of Jump Start was dedicated to receiving the new Cadets and settling them into their dorm rooms.  After a successful first day, the second day of Jump Start began with the Cadets receiving a welcome from the EWU ROTC Cadre and the Military Science Department Chair, Lieutenant Colonel Jonathan Stafford: 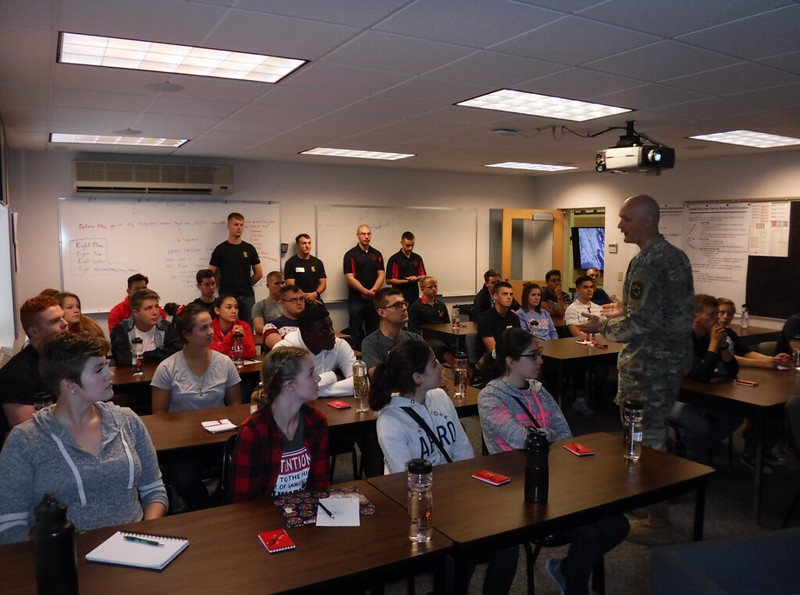 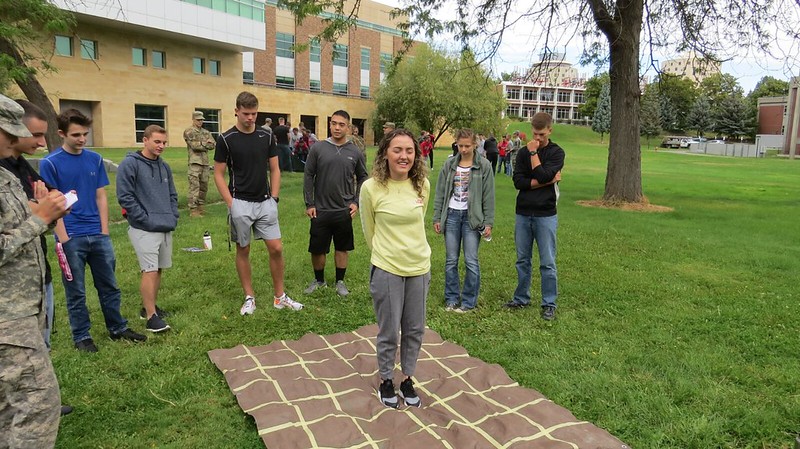 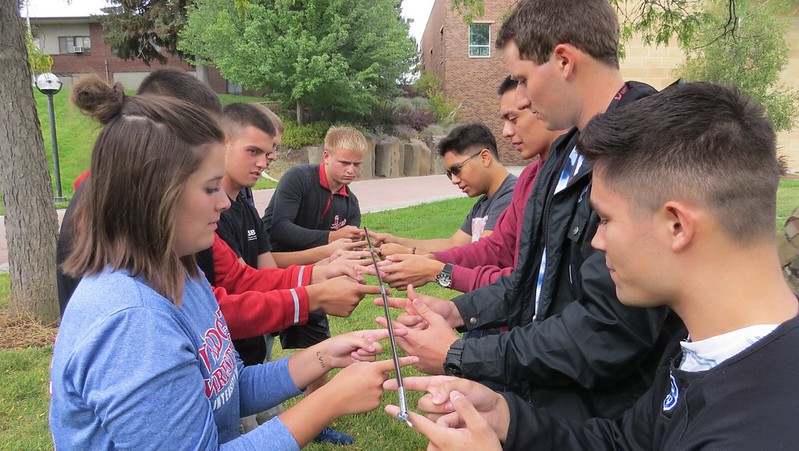 In the afternoon, the Jump Start Cadets conducted Drill and Ceremony training directed by the MS III and MS IV Cadets: 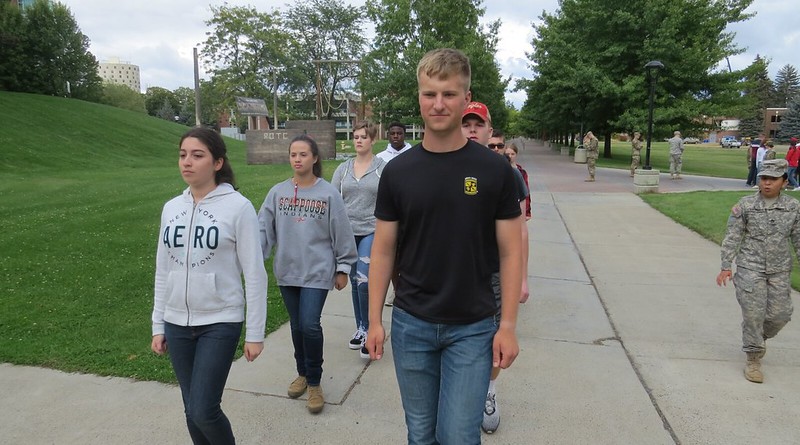 The Cadets ended day 2 by being issued their initial gear and uniforms: 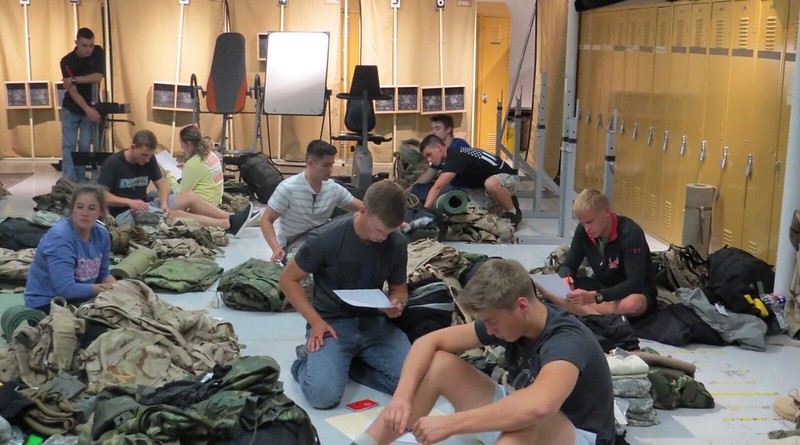 A very busy Day 3 for the Cadets began with some early morning physical training (PT): 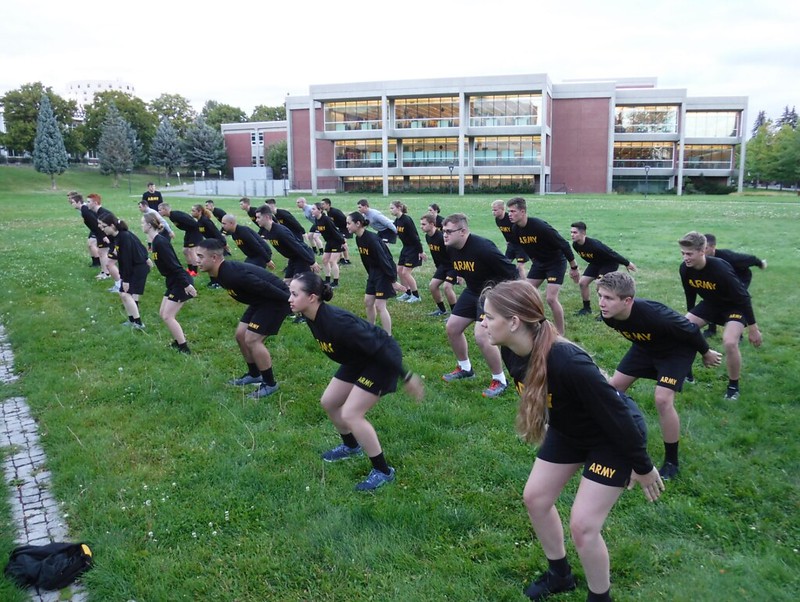 They also got to meet the EWU ROTC obstacle walls: 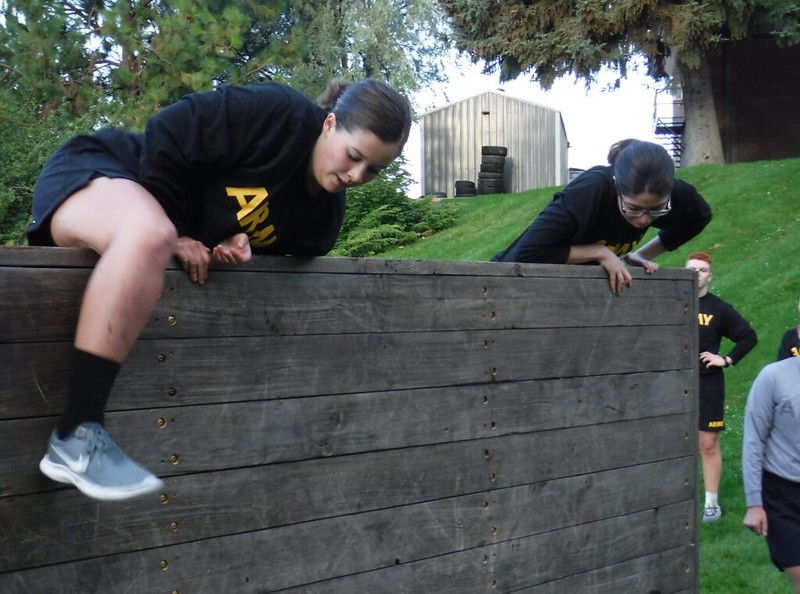 After PT the first year Cadets conducted classroom training on land navigation in preparation for the field portion of Jump Start that would begin later in the day: 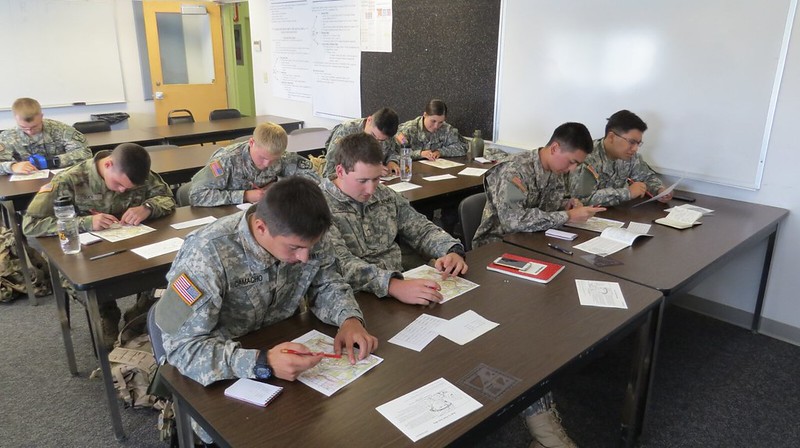 They then applied their newly learned land navigation knowledge outside with a compass course: 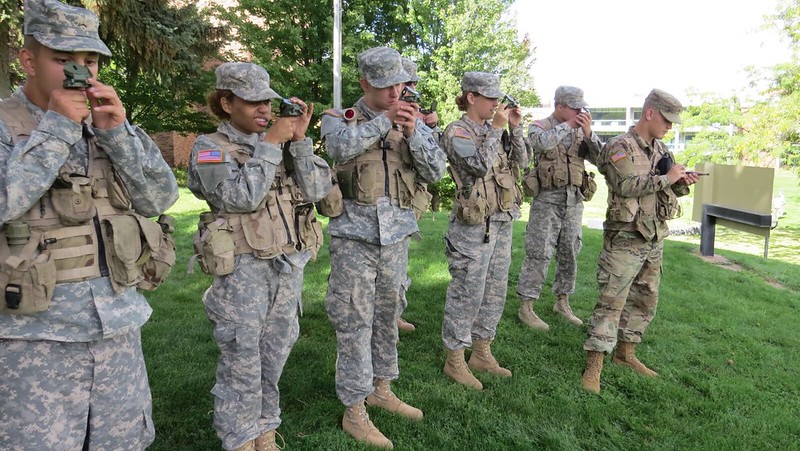 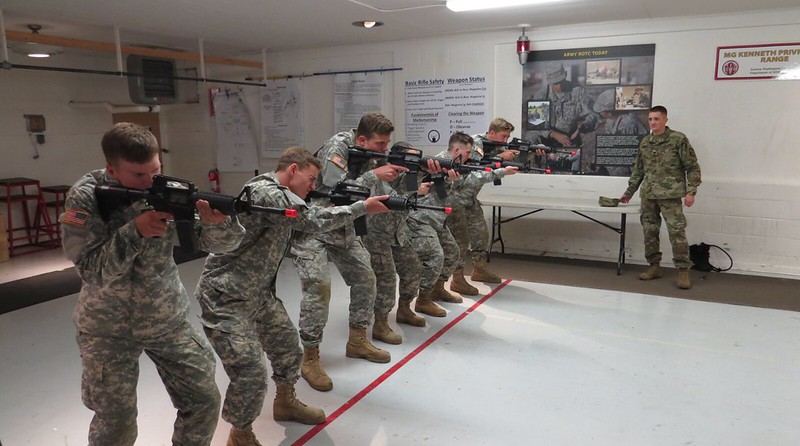 Later that afternoon the Cadets then deployed out to Seven Mile Training Area located in the forested hills north of Spokane:

The training area is within the expansive Riverside State Park that straddles the banks of the scenic Spokane River:

The Cadets spent the night outside at the training area and at dawn they woke up to a high temperature of 39 degrees.  After eating a Meal Ready to Eat (MRE) breakfast the Cadets then prepped their gear in preparation for a busy day of training: 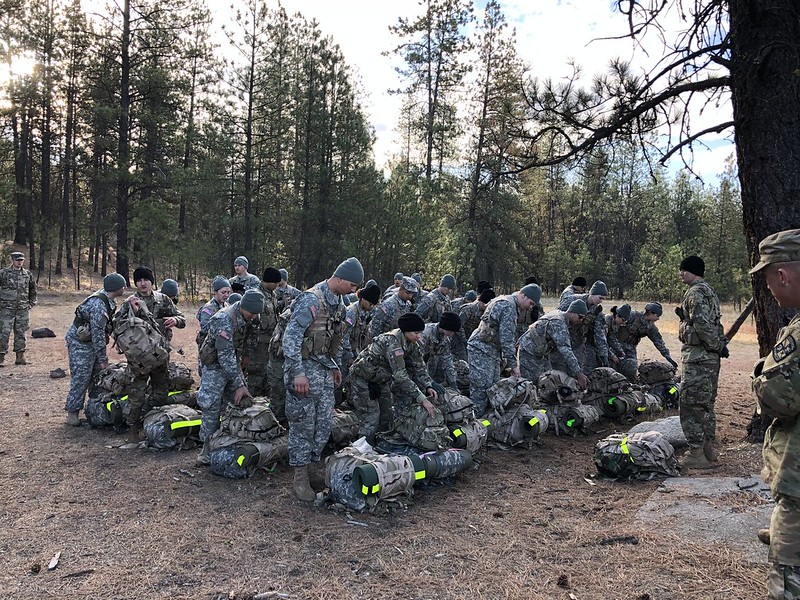 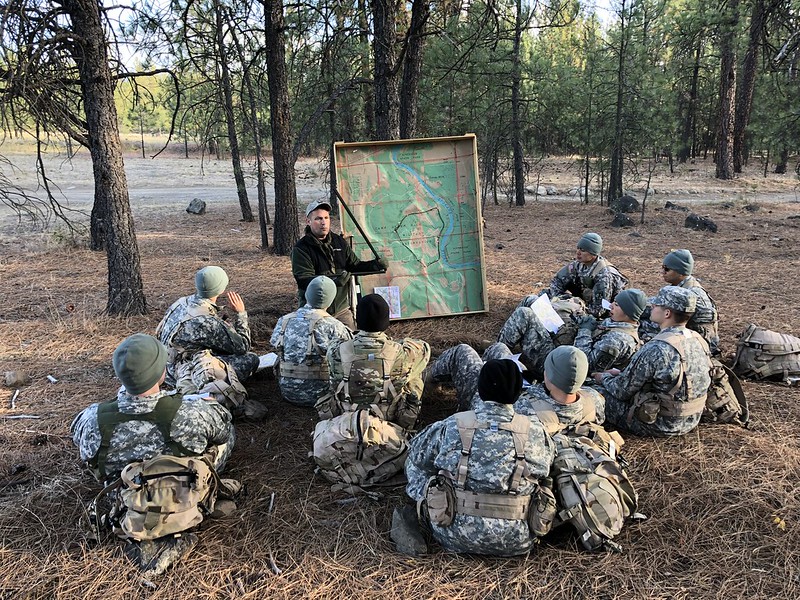 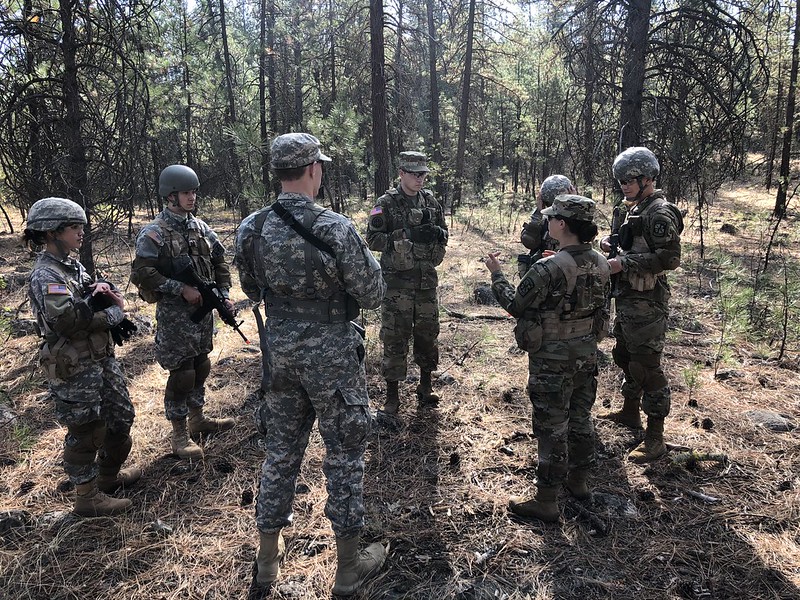 During the training lane Cadets practiced how to react to fire and conduct buddy rushes against enemy positions: 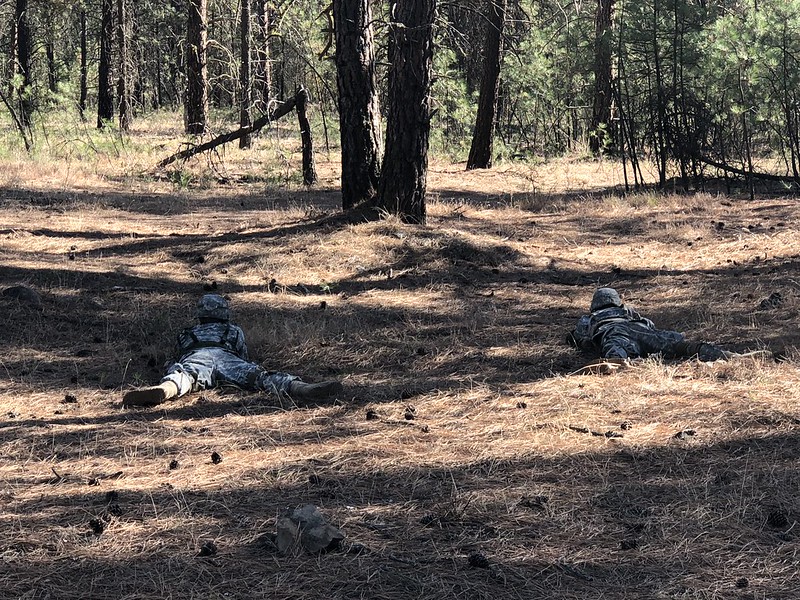 The Cadets also received instruction on how to throw grenades.  MS III Cadet James Tallakson (right) instructs a Jump Start Cadet on how to properly throw a grenade: 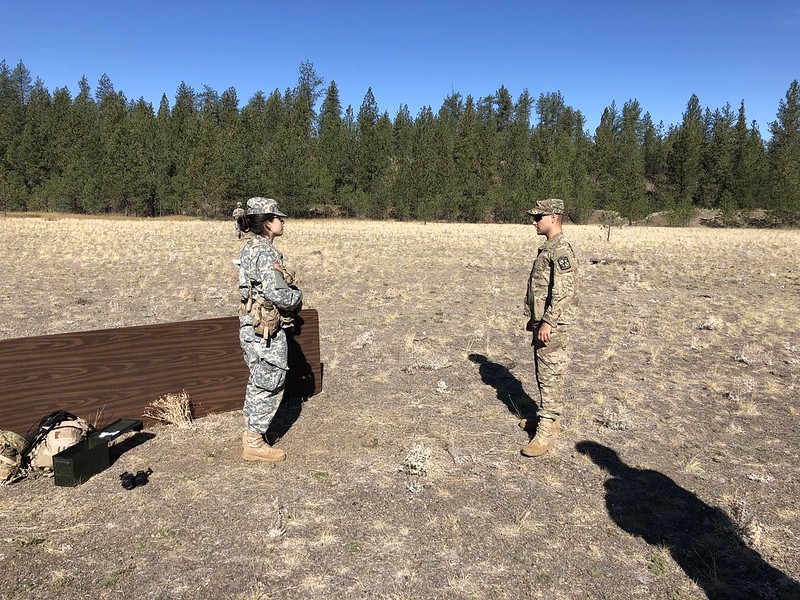 A major highlight of the field portion of the training was the arrival of a UH-72A Lakota helicopter flown in by Soldiers from the Washington State National Guard.  The National Guardsman provided an overview brief about the helicopter, allowed Cadets to get inside of it, and answered questions about being an officer in the National Guard: 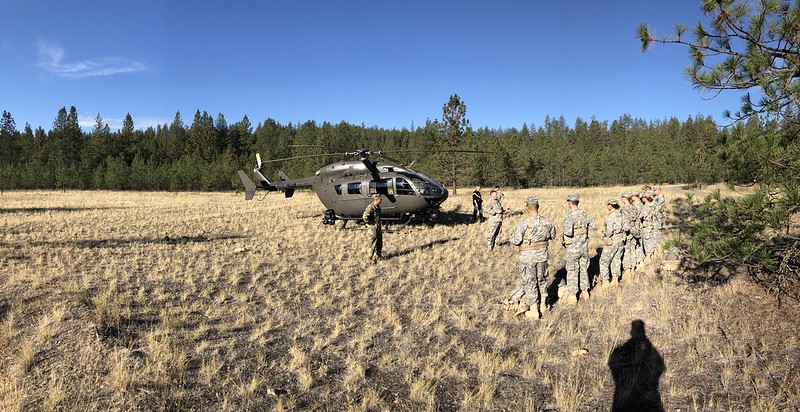 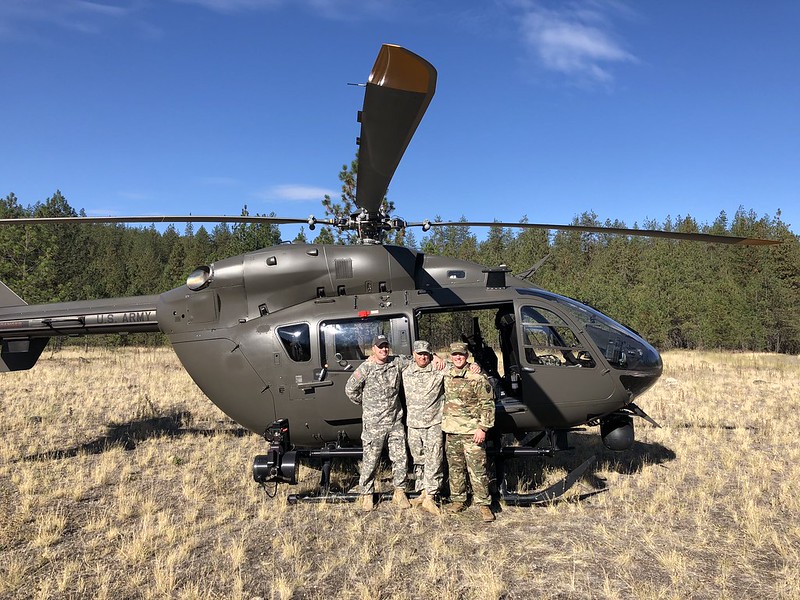 The National Guardsman are part of Charlie Company, 1-112th Aviation Security and Support based out of Fairchild AFB, WA: 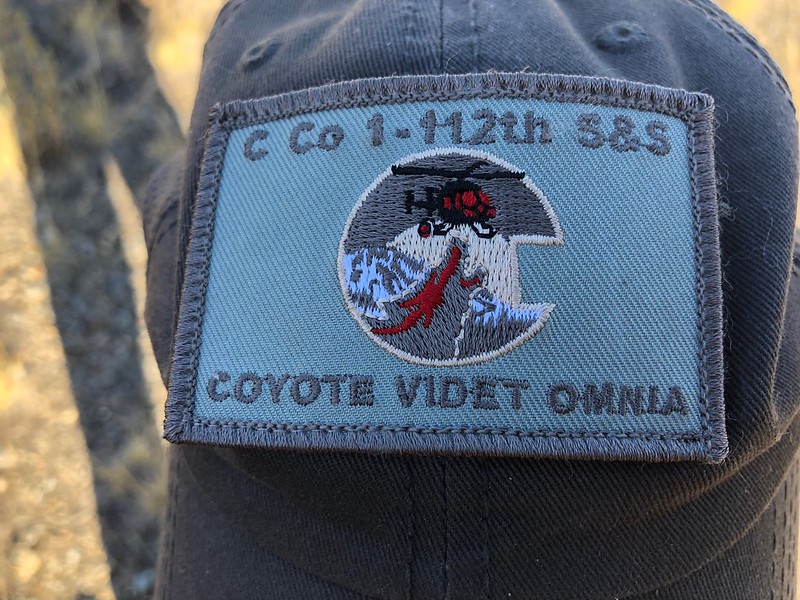 After the completion of a successful fourth day of Jump Start training, the Cadets headed back to Cheney for a well deserved night of rest.  The rest was needed because on the final day of Jump Start 2018 began with the Cadet Commanding Officer, Haley Bent leading the new Cadets on their first unit run: 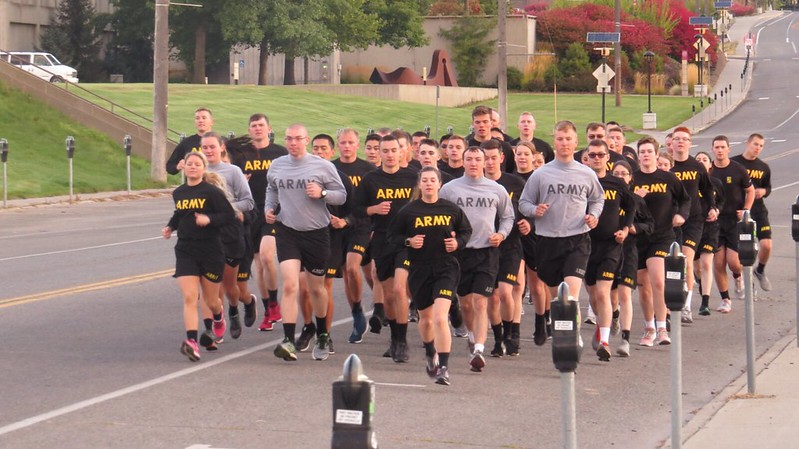 During the run the Jump Start Cadets took a team picture at the entrance gate of Eastern Washington University: 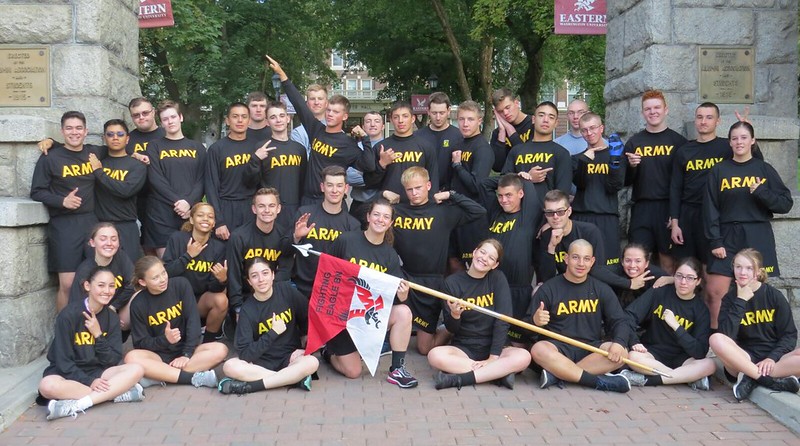 The final day of Jump Start 2018 concluded with a luncheon and award ceremony for the Cadets with their parents: 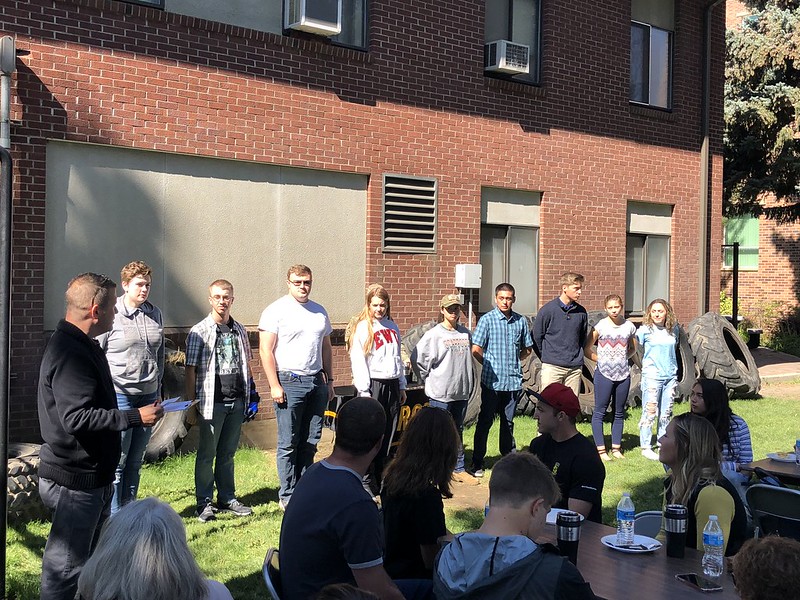 Jump Start 2018 was without a doubt a great success.  A total of 33 MS I Cadets were able inprocess, move into their dorms, become familiarized with PT, and conduct basic Soldier skills training.  These talented MS I Cadets have kicked off what will be another great year for the EWU ROTC program. 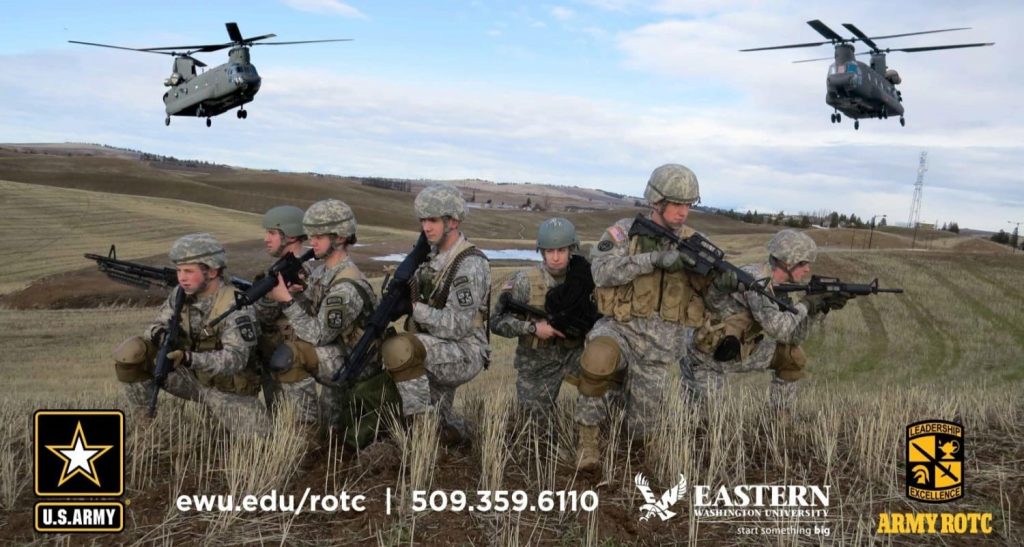