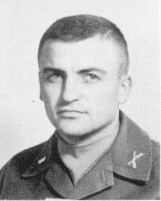 Major Richard Ator was from Moses Lake, Washington and was known by his nickname “Buck”. During his time in ROTC, “Buck” received the Legion of Valor Cross for being the top Cadet in the Pacific Northwest. He graduated in 1962 and commissioned as an infantryman in to the U.S. Army. He was killed in action during his second tour in Vietnam on March 5, 1970 while running through mortar and small arms fire to resupply the South Vietnamese unit he was serving as an advisor to. His heroism that day was recognized with receiving the nation’s third highest medal for valor, the Silver Star.  Major Ator left behind a wife, one son and one daughter. He was 32 years old.

The Department of Military Science offers condolences to the family of Major Richard Ator and commemorates his service for making the ultimate sacrifice in defense of our great nation.

Note: If any friends or family have any memories they would like to share about Richard Ator, please leave a note in the comments section because we would love to learn more about him.