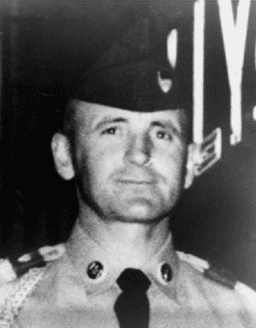 SFC Grandstaff is the only Fighting Eagle Cadet to ever be recognized with the Medal of Honor.  Bruce Grandstaff enrolled into Eastern in 1952. Two years later in 1954, Grandstaff decided to enlist into the Army. He spent two years in the Army before returning to Eastern to continue his military science studies in 1956.  Grandstaff decided to reenlist in the Army in 1961. In 1967 he was deployed to Vietnam as a Platoon Sergeant. During an operation along the Cambodian border, Grandstaff’s platoon became surrounded by an estimated 700 enemy soldiers.

The battle lasted for 5 hours and Grandstaff was wounded in both legs as he rallied his men, coordinated helicopter strafing runs, and artillery fire against the attacking North Vietnamese troops. In a final act of courage Grandstaff ordered an artillery strike on top of his own position. He died that day on May 18, 1967.  He left behind a wife and three daughters, he was 32 years old.

The Department of Military Science offers condolences to the family of Platoon Sergeant and Sergeant First Class Bruce Grandstaff and commemorates his service for making the ultimate sacrifice in defense of our great nation.

Note: If any friends or family have any memories they would like to share about Bruce Grandstaff, please leave a note in the comments section because we would love to learn more about him.