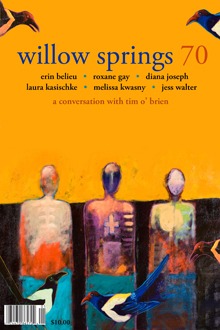 When my husband asks me where I put the keys,
I say they're on my bureau,

and he says you mean dresser

and I say no, bureau.

Your mother must have brought that with her
from New York, he says,

and I say, yes, she carried it with its three top drawers
for her silk panties and slips,

her stockings, the small sachets she always used
to scent them, embroidered like my grandmother's

handkerchiefs, my grandmother who came once
a year to see my mother and her bureau,

who poached her egg in the early mornings
on the kitchen stove. I didn't know poach,

didn't know pocketbook, the black bag
she opened at the metal, magnetic clasp

and drew out a gold tube of lipstick,
a romance novel with a picture of a man

over our mantel
but that man looked like he had asked

permission, like he knew
he only had this small circle of light

and he should touch the fabric of her dress first
before feeling for what was under it,

the skin that had been sleeping
for years beneath a girl's nightgown,

like the ones I kept folded in my bureau,
and the one I took

from my grandmother's apartment in Queens
after she died. It was still in its plastic--

to the telephone wires her voice traveled to my mother
like a thin road, winding and black, the kind

you drive at night, the moon always with you.
When she was gone, I unwrapped her nightgown.

It was pink and cotton and sleeveless.
I wore it standing on our porch

so I could feel the wind.

When You Have Lived a Long Time in One Place

things start to vanish. Like the old Newberry's
where I used to buy earrings that looked
like tacks, six pairs for a dollar, and then
go sit at the lunch counter with the old people
eating patty melts and drinking black coffee.
They stared in front of them like the women
on the bus with their plastic rain scarves
that they took from their purses when the bus
lurched toward their stop. They wore dresses
from the old country. Now I wonder
if they have nowhere to go. The building
stands empty like a mind that still clicks open
its eyelids in the morning but can't remember
the words that stick things to their places,
pants, chair, toast. How can we remember
if they keep taking things down, like the house
where I lived when I was young and waiting
for love? I lay there in the yard in my bathing suit
pink as a poppy and I could feel his shadow
when it touched my body. That body
is gone now too, hanging in the back of a closet.
Now there is only a clean slate of grass
where that house stood, the same grass
that covers the spot in Lincoln Park
where there used to be a wading pool,
where I took Ben until the day I turned away
to get a toy for him and then he was
face down in a foot of water and I pulled him out
and we looked at each other and I could see
in his eyes that he couldn't believe the water
was heartless, that it didn't know who he was.

People Don't Die of It Anymore

We're driving up Carnahan, winding south
toward the Palouse, its fields of wheat

at our periphery like hair.
This is the road where Robert Yates dumped

the bodies on his way home
to his five children, hearing the door

click open in their dreams
so later they'll say they knew.

My dad says the retirement home
we just passed, brick and lit with the cold

sunlight, used to be a sanitarium
for women with tuberculosis

and my sons ask, What's tuberculosis?
We 're on our way back

from Greenbluff, constellation of farms
to the north where you go in the fall

for pumpkins and apples
and I can feel their beauty

in the trunk of the car, the thick fruit
beneath the ambrosia's skins, the seeds

that will get under our fingernails
and hurt for days. St. Therese

of the Little Flower died of it.
She was so kind in her biography,

always opening the door
for the gardener. And then she started

coughing blood and I mourned her
in my plaid uniform

and my Peter Pan collar.
People don't die of it anymore, I say,

and we fall quiet for a moment and stare
at the houses on Carnahan,

their fences and dark windows,
their scribbles of smoke.