Frank Gallimore is the associate director of marketing for Gallaudet University. He also holds an MFA in poetry from Johns Hopkins University and paints in his spare time. A sampling of his art and poetry can be found at frankgallimore.com. For more recent works in progress, you can follow him on Instagram at @frank_gallimore.  His poetry has appeared in a variety of journals and websites, including Slate, Harvard Review Online, Unsplendid, Cold Mountain Review, and was featured a couple of times on Verse Daily.

Notes on “Edsel” and “Appaloosa”

“Appaloosa” reflects experiences I’ve had growing up in rural areas of Oregon and Nebraska, living close to livestock and plenty of other domesticated animals. Growing up this way allowed me to witness the complicated relationships we have with them, the bonds we make and sometimes sever. The lives of these animals have in many ways supplied the vocabulary for the languageof my childhood. I know it’s easy to run the risk of anthropomorphizing but there’s a reason for that. I believe animals bear more humanity than we are oftentimes willing to admit. Or, to put it differently, I find we are not so unlike animals as we would like to believe.

I can’t speak to what brought the Edsel into this poem. I believe the poem wanted to be about intertidal zones, their changeability, all that life and death, and life in death. Somehow, in that way that poems have, and because it looks like a fish, someone drove this memory of an old, ruined Edsel into my poem and left it there until the poem became the Edsel.

What a funny question! Music-wise, I listen to everything but usually not with profound attachment. FKJ and Elise Trouw have interested me lately, as well as anything mellow with a hip-hop edge. By contrast, I also happen to be an occasional bluegrass fan. I sing old tunes out loud to myself a lot, sometimes without realizing it. I know much about me tends to be contradictory. Intersectional, perhaps. Food-wise, I have a weakness for enchiladas and lasagnas, anything with an excessive amount of cheese. I like a good scotch although I rarely drink. Most of the time I’m good with a diet coke or just water. I have a tattoo on my arm that I got when I was eighteen. In Japanese, it says “Opposite Twins”. We have a zoo, consisting of two dogs, a rabbit, a bearded dragon, and two African clawed frogs. 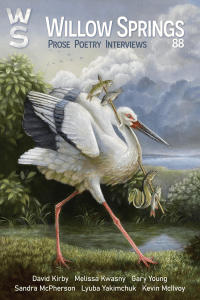 Edsel I can feel myself winnowing to some rudimentary figment, as when the distinction no longer quite holds between that Edsel and a beached hunk of carrion, its vertical grille […]