You are here: Home / Archives for Physical Training

On January 22, 2020 the Eastern Washington University (EWU) Reserve Officer Training Corps (ROTC) program had the great honor of hosting Command Sergeant Major Mario Terenas who is the senior enlisted leader for all 274 ROTC programs across the nation in the U.S. Army Cadet Command.

During his visit to Eastern Washington University, CSM Terenas was able to conduct physical training and discuss leadership with our Cadets.  CSM Terenas was also able to recognize Captain Nick Carbaugh and Sergeant First Class David Ratliff for being selected as the 8th ROTC Brigade Instructors of the Year. He also recognized Cadets Cheyenne Sweet and Coy Odiorne for their outstanding performance on the new Army Combat Fitness Test.

He additionally was able to tour the ROTC facilities, take a campus tour, and visit with the EWU Provost, Dr. David May before concluding his visit with a lunch with the Cadets.  CSM Terenas is an inspiring leader who we thank for taking the time to travel from the Cadet Command headquarters at Ft. Knox, Kentucky to Cheney.  He is definitely an example of the “Don’t Be Average” mentality.

This morning the Eastern Washington University (EWU) Reserve Officer Training Corps (ROTC) conducted a 7-mile ruck march around the EWU campus.  Each Cadet from the Fighting Eagles battalion carried 35 pounds plus additional equipment in their rucks during the march.  Ruck marching tests the endurance and strength plus pushes these future Army leaders to new limits. 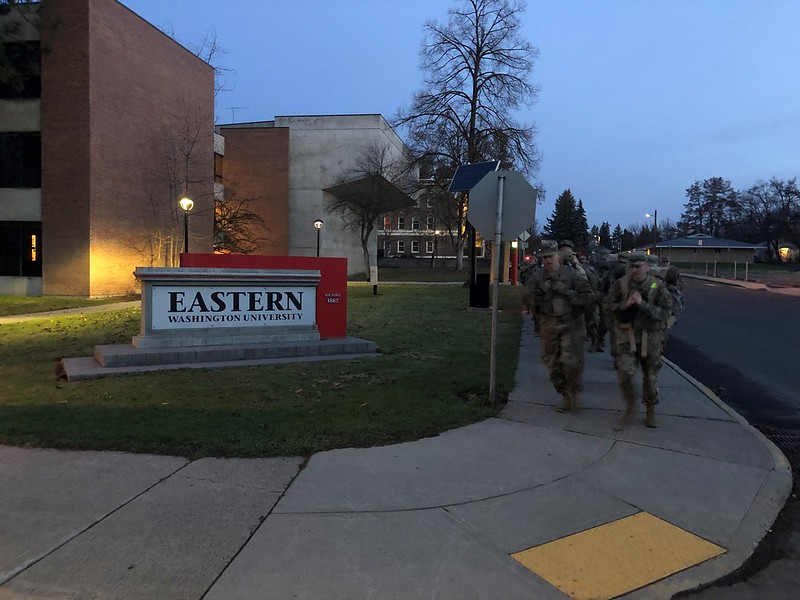 For anyone looking to push themselves to new limits, become Eagle Strong by joining the EWU ROTC Fighting Eagles battalion.

This week Cadets from the Eastern Washington University (EWU) Reserve Officer Training Corps (ROTC) program conducted the Winter quarter Army Physical Fitness Test (APFT) inside the EWU Fieldhouse.  The APFT is a three event test that measures the muscular and cardiovascular endurance of the person taking the test.  The first part of the APFT is the pushup event where the Cadets each had to do as many pushup repetitions as possible within a 2-minute timeframe. 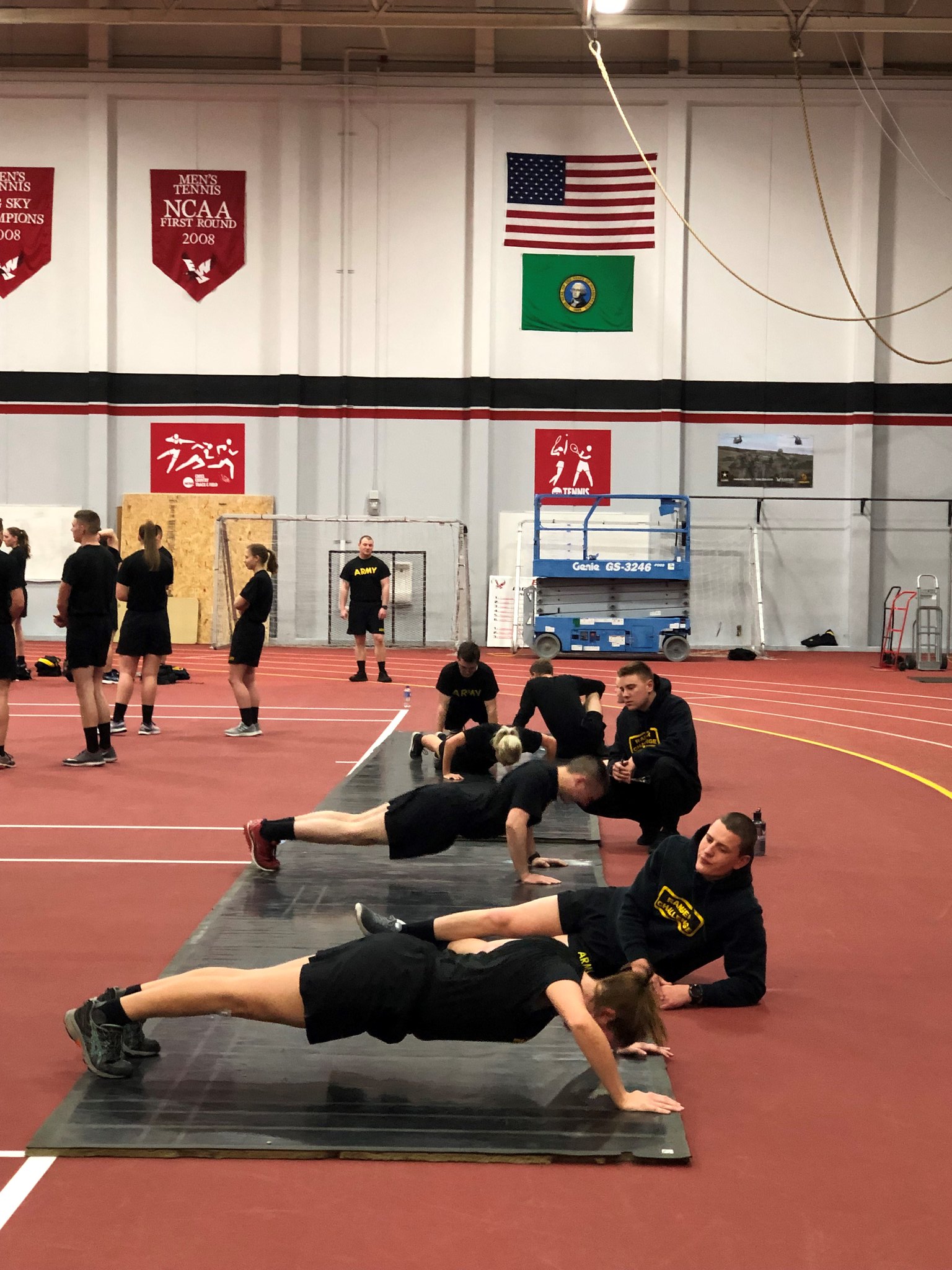 The second part of the APFT is the situp event.  During this event each Cadet had to do as many situp repetitions as possible with their hands behind their neck within a 2-minute timeframe. 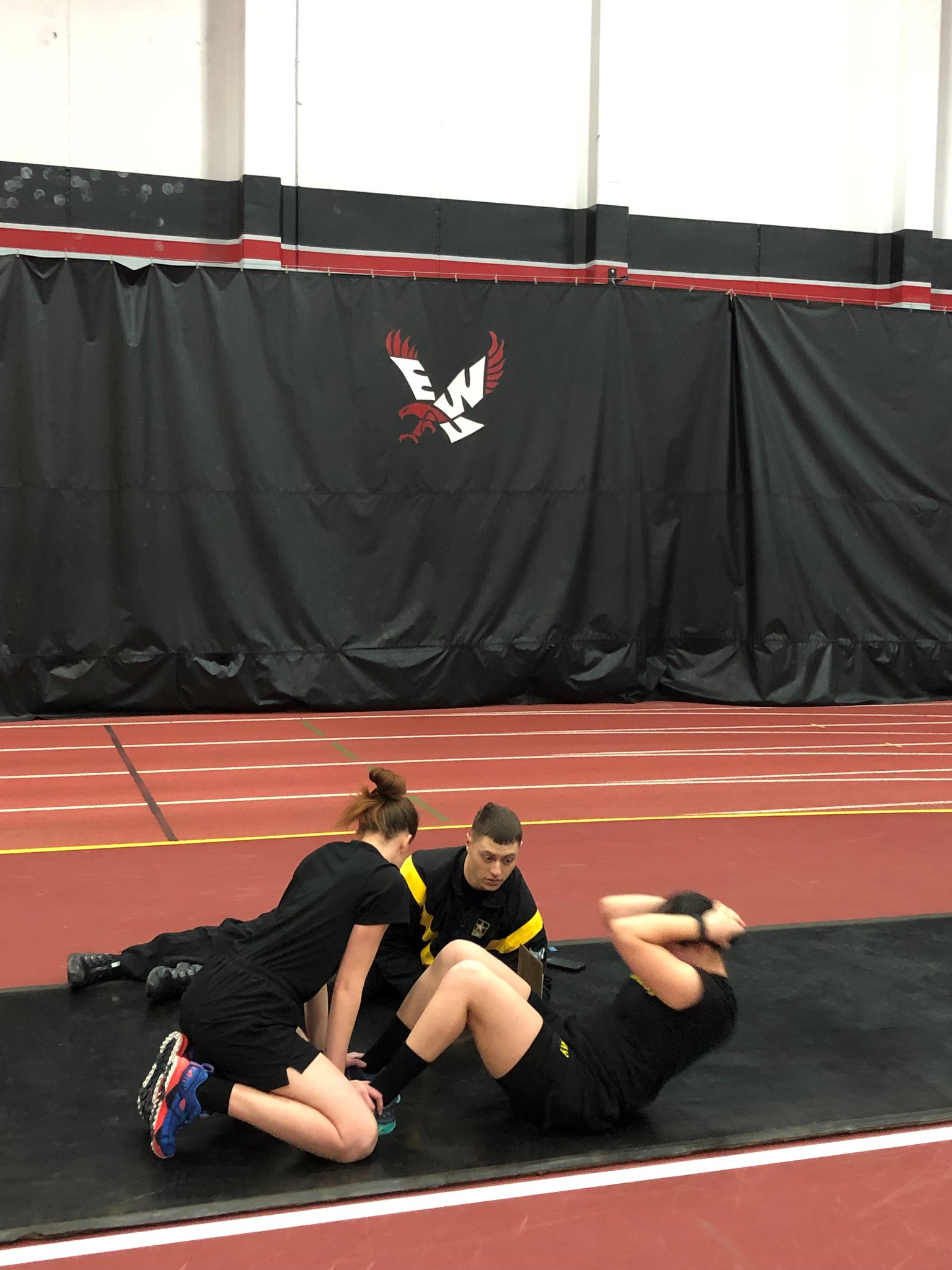 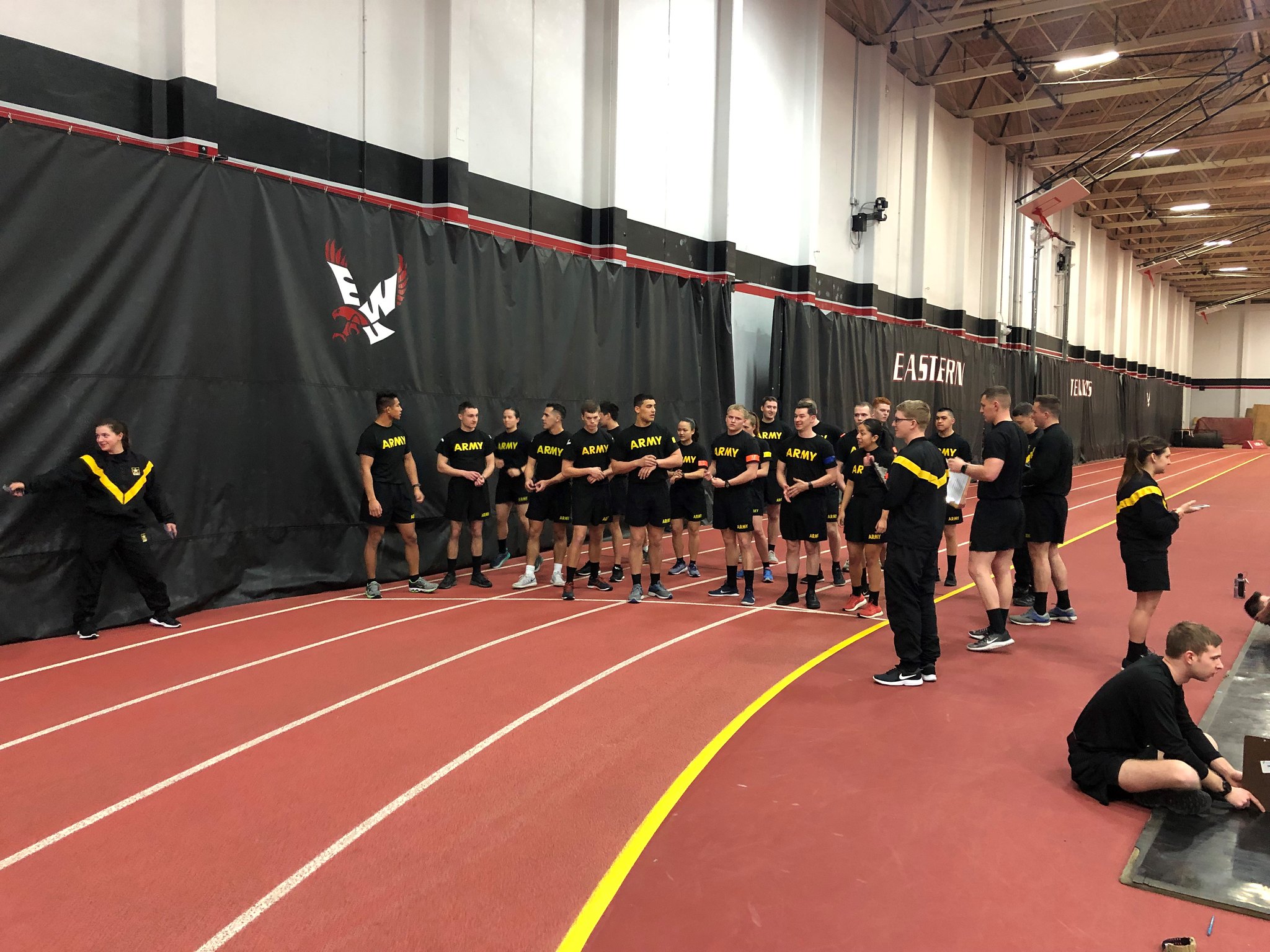 Being able to pass the APFT is an important milestone within the ROTC training program.  Receiving a passing score as well as meeting Army height/weight requirements allows Cadets to contract into ROTC and access scholarship benefits, a $420 monthly stipend, apply for ROTC sponsored internships, and attend advanced military training.

For anyone thinking of joining ROTC that may be concerned that they are not in shape to pass the APFT, don’t worry because most new Cadets do not have the fitness level to pass.  The ROTC process is about building leaders and developing physical fitness is part of the program.  EWU ROTC conducts physical training (PT) each weekday morning that prepares Cadets to pass and excel at the APFT.  Most new Cadets after completing a quarter of ROTC see dramatic improvements in their fitness level.

For anyone interested in improving their fitness and exploring ROTC please give our Enrollment Officer Mr. Rob Riedel a call at 509-359-6109.

The Army has recently announced that it is moving away from the current Army Physical Fitness Test (APFT) that measures the fitness of all Army troops.  The APFT consists of three events:

The APFT is scheduled to be replaced within the next two years by the Army Combat Fitness Test (ACFT).  The ACFT replaces the APFT with six new events:

To prepare for the ACFT, Cadets from the Eastern Washington University (EWU) Reserve Officer Training Corps (ROTC) program recently conducted the ACFT in the university’s Fieldhouse. 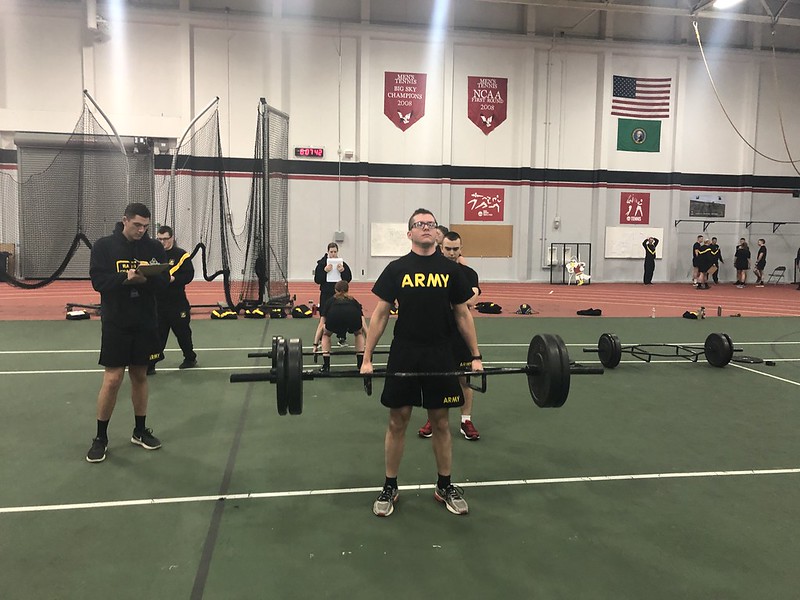 The first event in the ACFT is the deadlift exercise.  For the deadlift the Cadets had to do a three repetition lift of a minimum of 140 pounds. 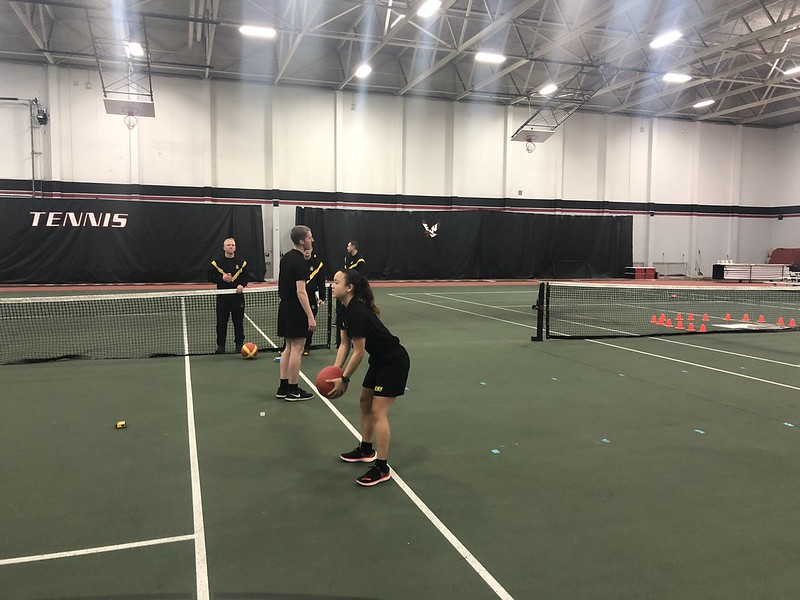 The second event of the ACFT is the standing power throw.  With this event the Cadets had to throw a 10 pound medicine ball as far as they could over their heads.  The minimum distance for the power throw is 4.6 meters. 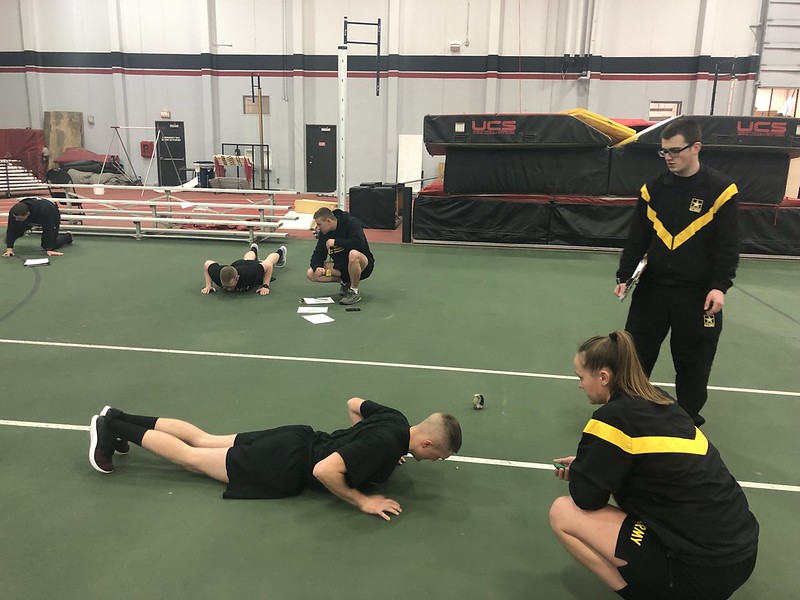 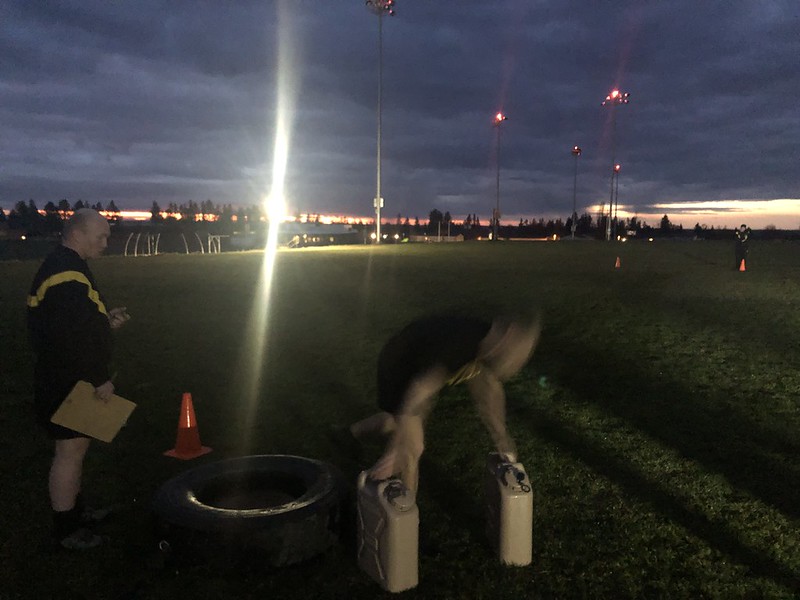 For this event the Cadets had to sprint 50 meters and then drag a 90 pound tire for 50 meters.  They then had to do a 50 meter lateral followed by carrying two 40 pound weights before finishing with a 50 meter sprint. The minimum time to complete the event is 3:35 minutes. 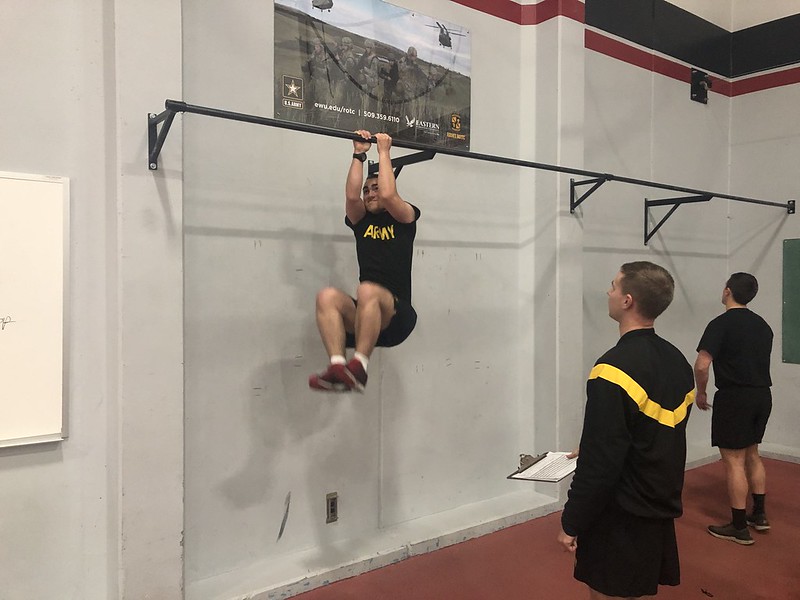 The fifth event, the leg tuck, required the Cadets to hang from a pull-up bar and then raise their legs and touch their knees to their elbows.  The minimum requirement is 1 leg tuck. 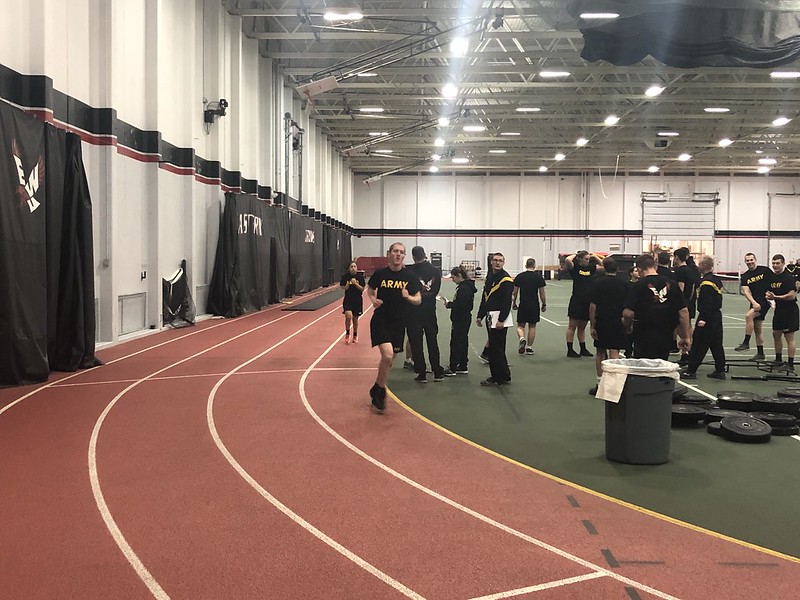 The only event in the ACFT that carried over from the APFT is the 2-mile run.  Due to the added events in the ACFT, the minimum two mile run time has been decreased to 21 minutes, 7 seconds.

The Army plans to implement the ACFT within the next two years.  Unlike the current APFT, the ACFT will be both age and gender neutral.  Instead the test will be scaled by a Soldier’s job.  Non-combat MOS’s have the lowest minimum standard while Combat Arms have the highest standards.  The grading scale can be seen below: 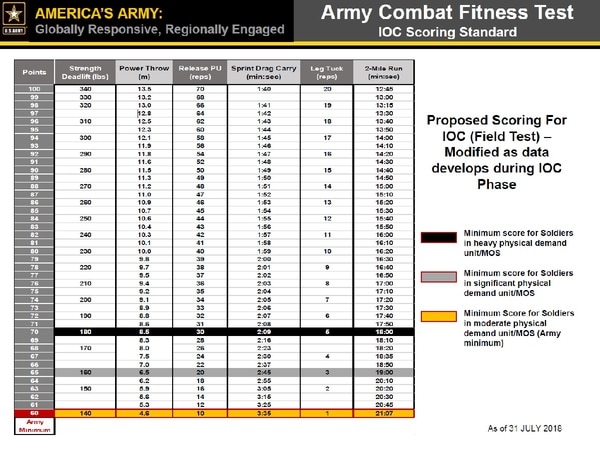 The new Army Combat Fitness Test is going to be a major cultural change for the US Army in the next two years which the EWU ROTC program is training its Cadets to lead.

This is a voluntary PT day where a EWU Strength and Conditioning coach will conduct physical training inside the Cadet Hall gym.

This is a voluntary PT day where a EWU Strength and Conditioning coach will conduct physical training inside the Cadet Hall gym.