The Eastern Washington University (EWU) Reserve Officer Training Corps (ROTC) program was recently notified that our Human Resource Assistant (HRA), Ms. Linda Moody was selected as the U.S. Army Cadet Command HRA of the Year.  This is a well deserved recognition for Ms. Moody who has been instrumental to the success of the EWU ROTC “Fighting Eagles” battalion. 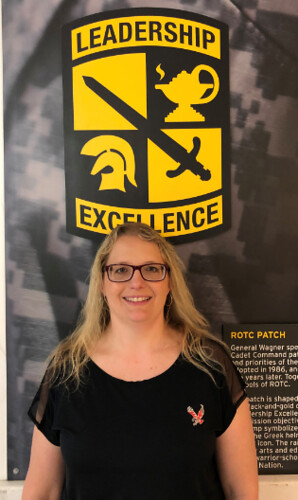 For example the ability of our Cadets to receive their first branch choice well ahead of Cadet Command averages and the high number of Cadets who received internships is to Ms. Moody’s diligence.  Ms. Moody besides being busy with her own HRA responsibilities also served double duty as the unit supply technician for the past year while the position was vacant.  She even served in a third position as our Unit Prevention Leader (UPL) in charge of administering our unit drug testing programing.  If that wasn’t enough she also spent the summer at Ft. Knox, Kentucky conducting both administrative and supply duties in support of Cadet Command’s premier Cadet training event, Advanced Camp.

Congratulations to Ms. Moody for this well deserved and prestigious accomplishment.