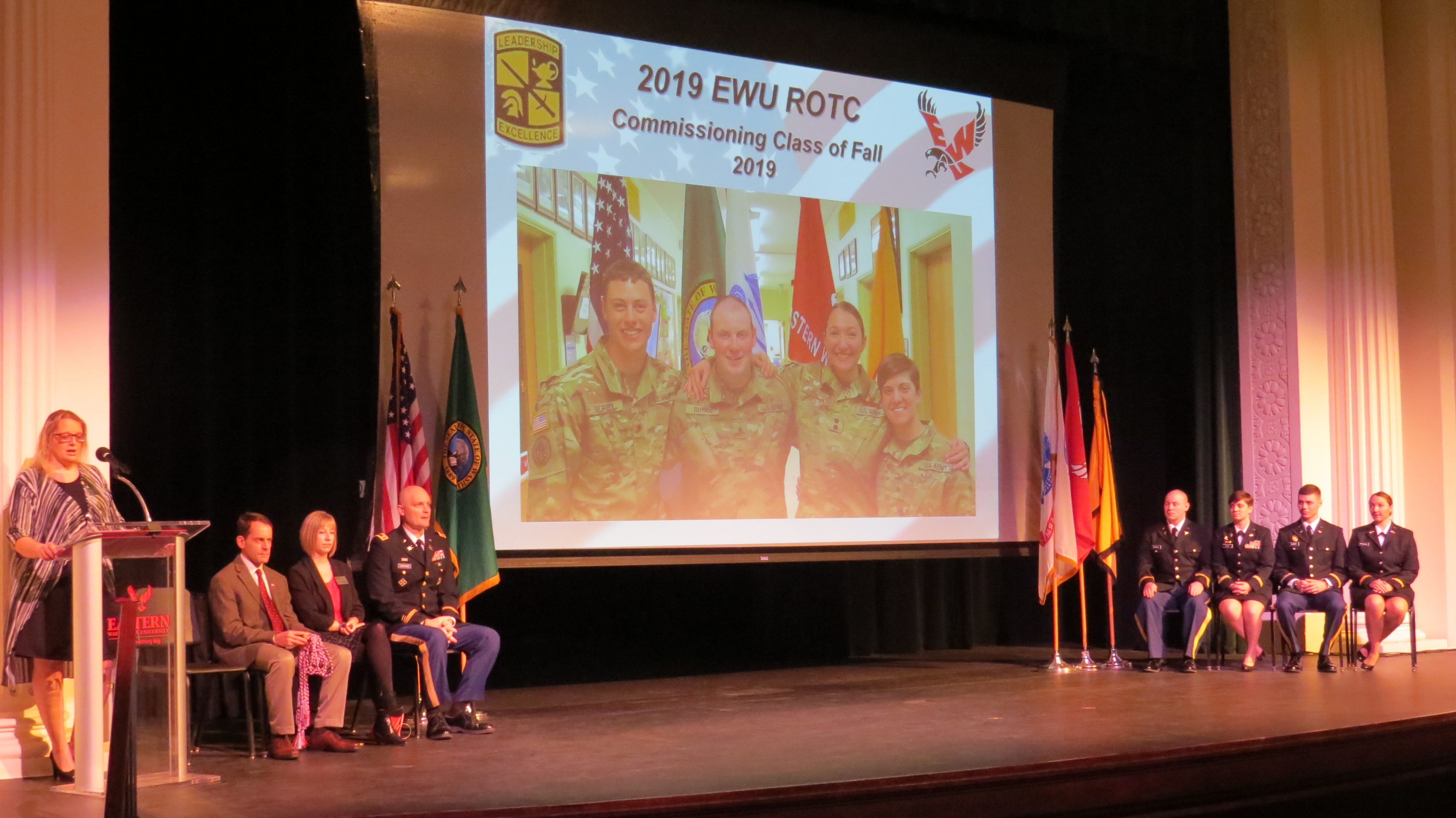 The path to this day was not an easy one for the commissionees. All the Cadets conducted up to 4 years of military training in the ROTC program, had to meet rigorous academic requirements, build strong physical fitness, pass the 37-day long ROTC Advanced Camp at Ft. Knox, Kentucky, among a host of other challenging requirements before they could commission as a Second Lieutenant (2LT) in the U.S. Army.  The ceremony began with the benediction given by Cadet Isabelle Erickson.  Following the benediction, the EWU Army ROTC Professor of Military Science, Lieutenant Colonel (LTC) Jonathan Stafford gave his remarks.

Besides excelling in ROTC, Cadets from this group were very active on campus executing cannon crew duties during the home football games, participating in volunteer activities such as our annual blood drive, assisting with color guard, and being part of the Ranger Challenge team.  They are a truly remarkable group of young leaders.  Following the remarks from LTC Stafford, the Cadets each came forward to be administered the Army Oath of Office to officially commission them as a 2LT into the U.S. Army. 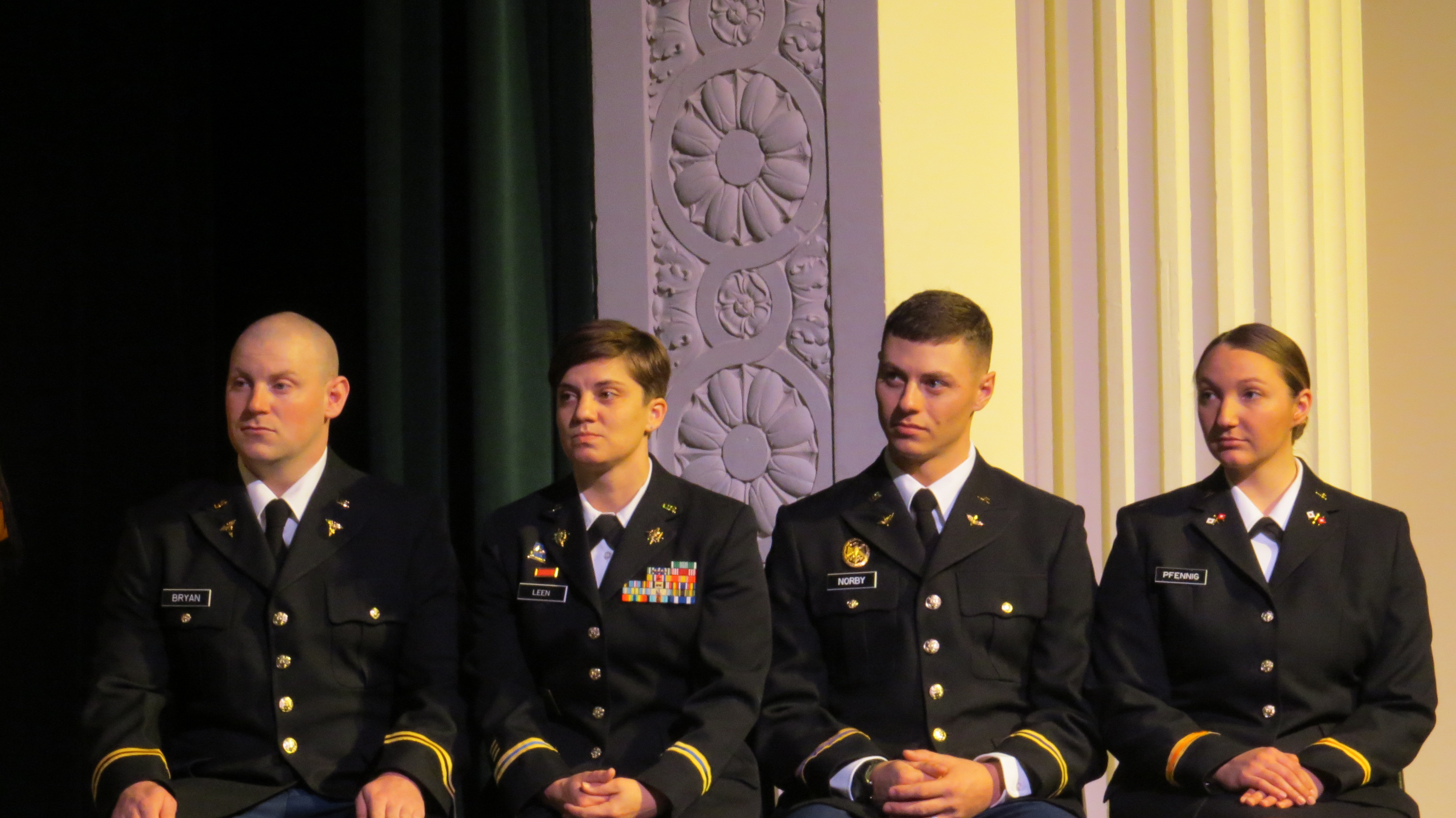 The Army Oath of Office

I (state your name), have been appointed an officer in the Army of the United States in the grade of Second Lieutenant do solemnly swear (or affirm) that I will support and defend the Constitution of the United States against all enemies, foreign and domestic; that I will bear true faith and allegiance to the same; that I take this obligation freely, without any mental reservation or purpose of evasion; and that I will well and faithfully discharge the duties of the office upon which I am about to enter.  So help me God.

Following the Officer Oath of Office family members then came up and put on the Second Lieutenant shoulder board rank on to the new officers. After the pinning of the new rank, each newly minted officer received their first salute from the enlisted person of their choice. Part of the tradition of the first salute is that the enlisted servicemember receives a silver dollar from the officer. 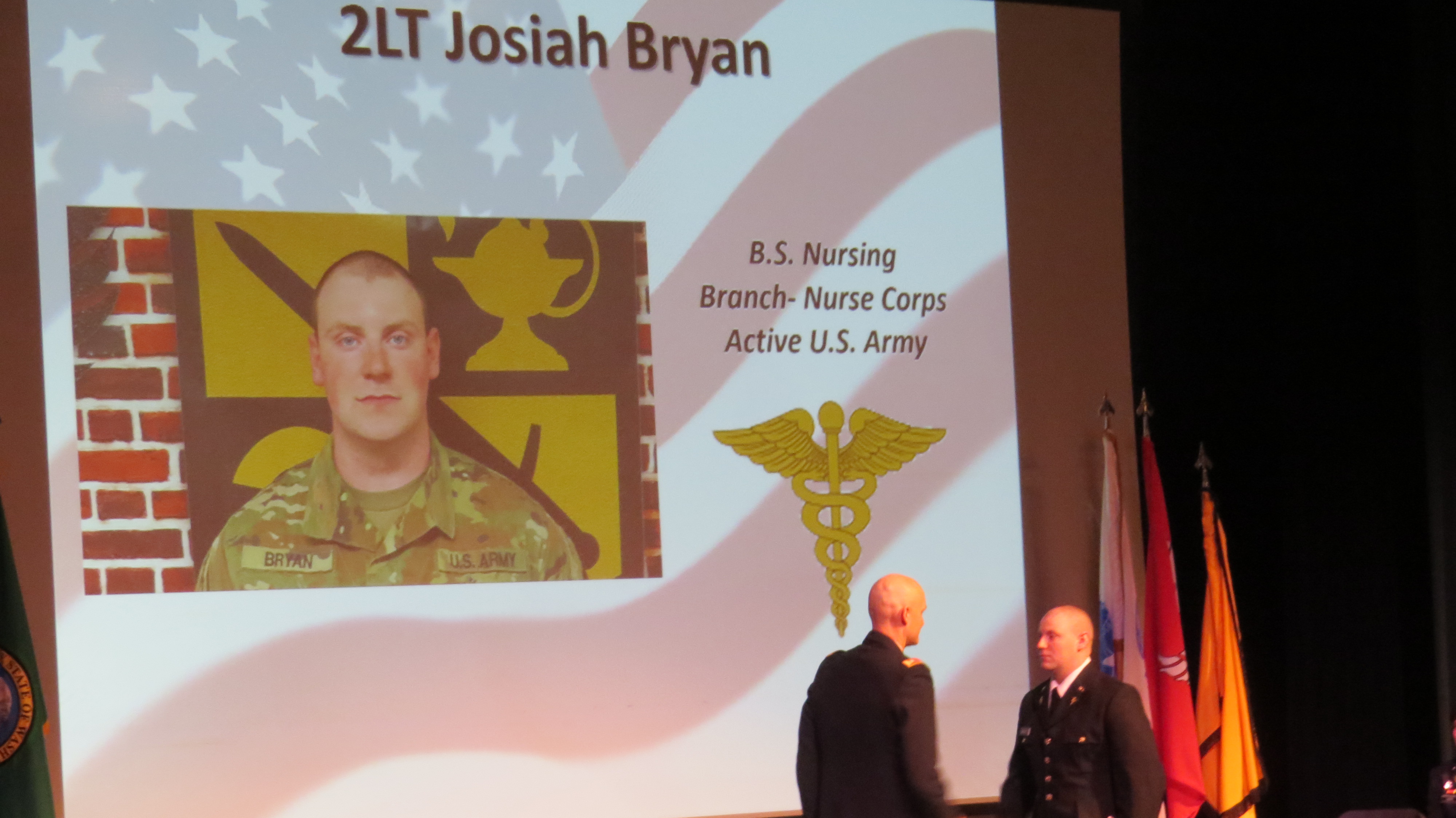 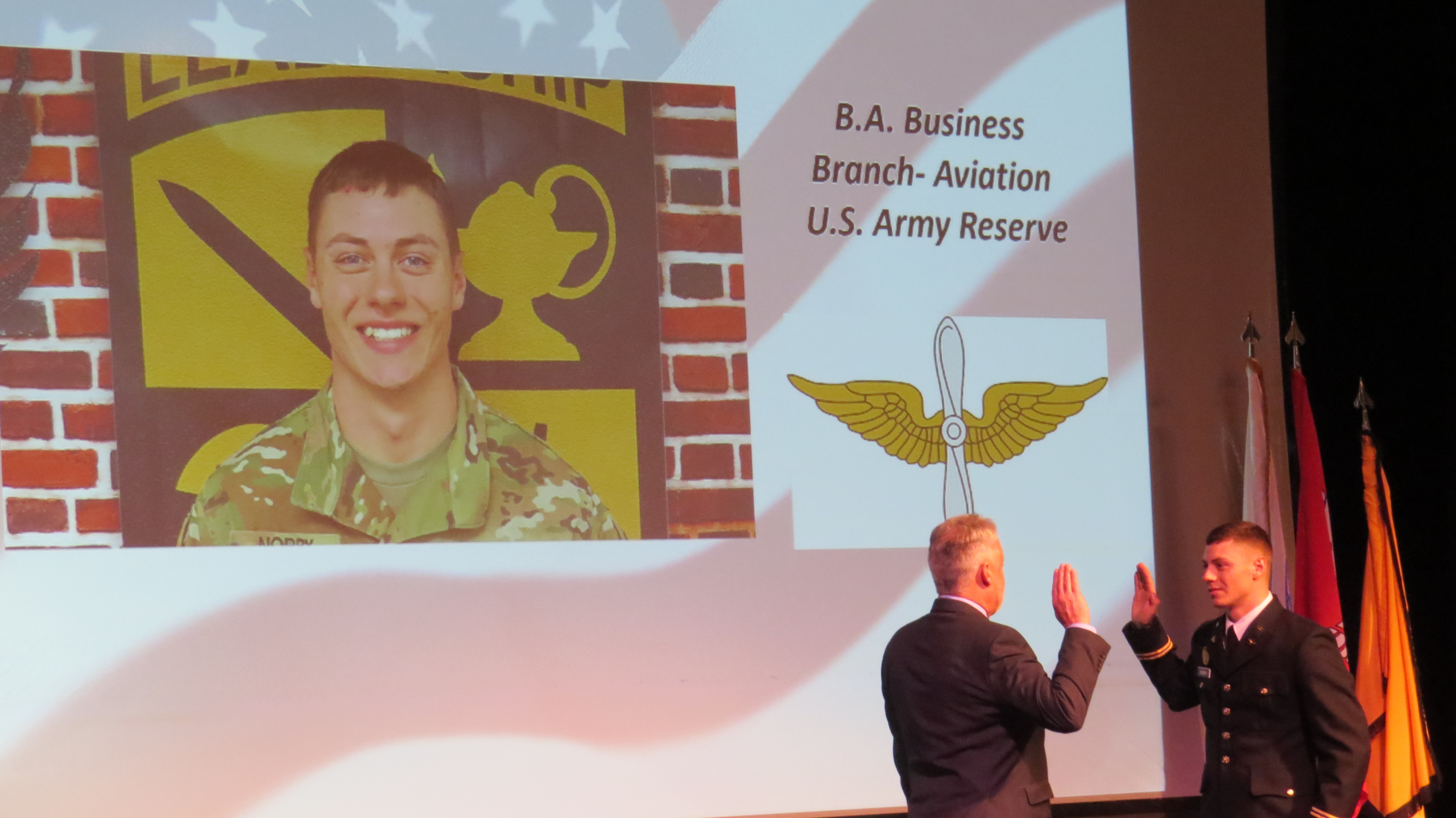 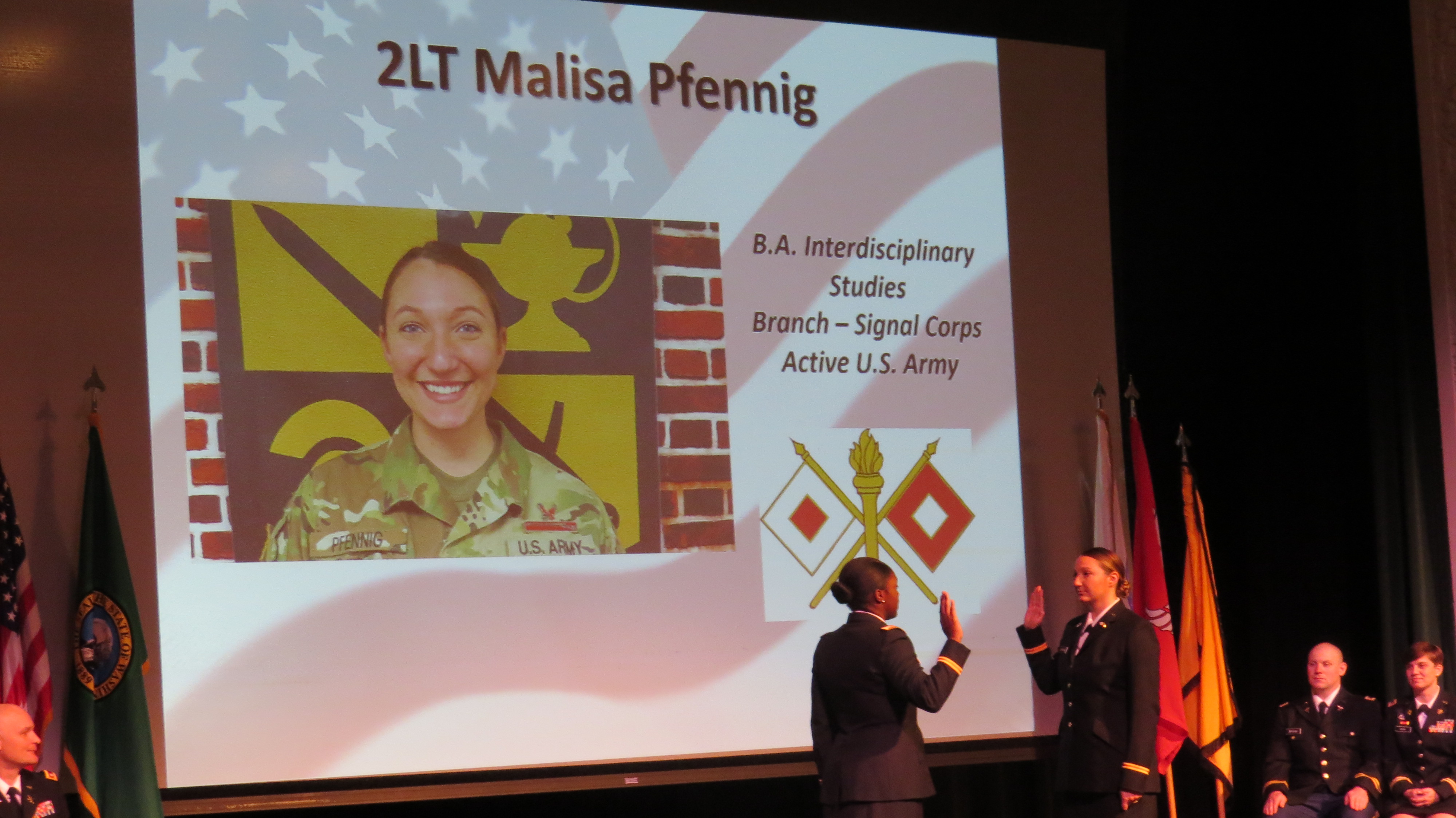 Following the administering of the oath of office two special guests made a presentation to the new Army officers. EWU ROTC thanks retired Lieutenant Colonel Dave Millet from the EWU Veterans Resource Center for presenting the veterans coins and honor cords to the commissionees today.  We also thank Lisa Cargill from the Office of Alumni Relations for presenting Eagle4Life pins to each of the new lieutenants.

Following the presentations from the two guests the newly commissioned officers joined the audience in singing the Army Song before receiving the closing benediction from Cadet Erickson. 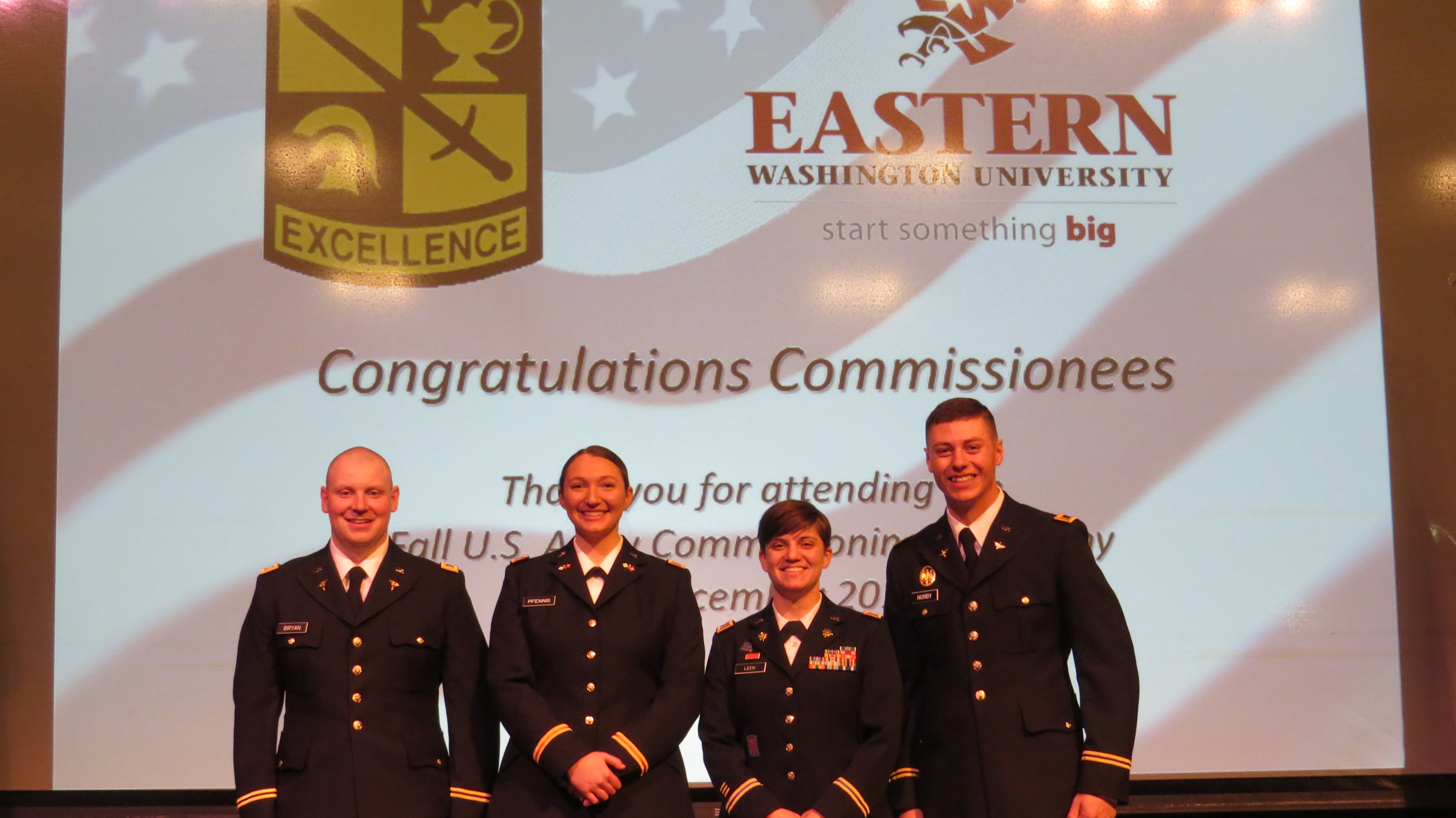 Note: All the pictures can be downloaded off of the EWU ROTC Flickr page.