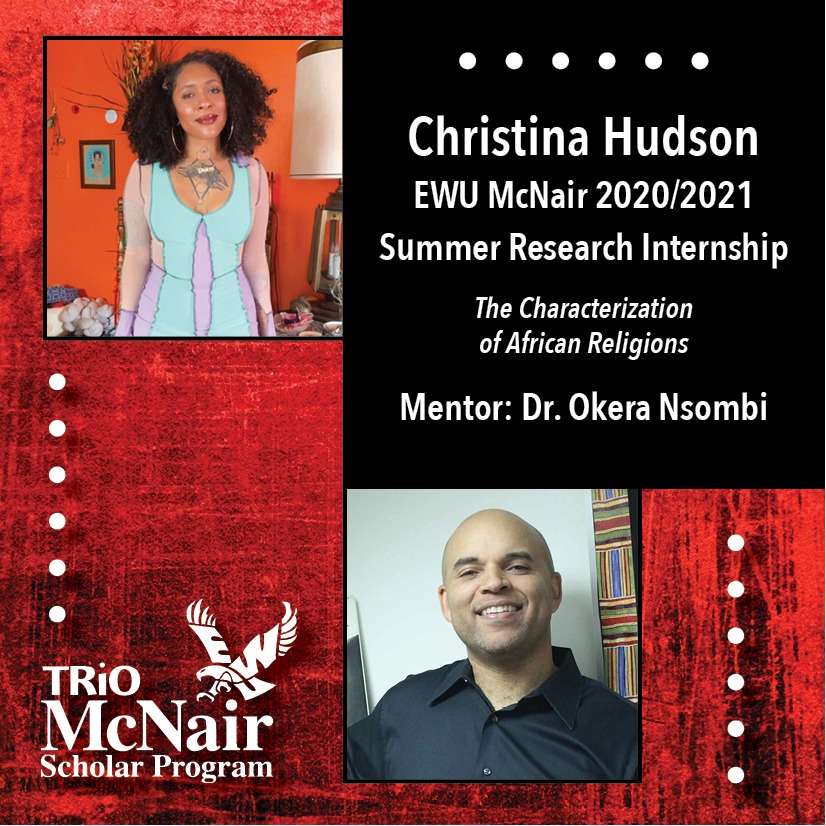 EWU McNair Scholar Christina Hudson worked with Dr. Okera Nsombi on her Summer Research Internship project The Characterization of African Religions. Christina’s aim was to investigate how Western academia’s proximity to Eurocentric hegemonies influences religious studies. Her literature review went on to survey the work of scholars who have engaged in the examination of Eurocentrism as it pertains to the study of African religions.

Christina analyzed 129 articles taken from 10 of the top 20 peer reviewed religious studies journals from 2020. She first inspected the articles for instances of the terms Africa, African, African-American, Hoodoo, and Conjure. She found that Indigenous African and African diaspora religious traditions, such as Hoodoo and Conjure, were not mentioned in any of the 129 articles.

Before beginning the study, Christina proposed:

Observing these gaps [in inclusion of Indigenous African and African diaspora religious traditions in peer reviewed religious studies journals] would highlight the ways in which the current survey of world religions within higher education can be expanded. Doing so may allow for a more accurate depiction of the contributions of African cultures to world religions. This will also help to reshape education in such a way that better tells the story of human development, cultural exchange, and interconnectedness.

Christina is interested in decolonizing religious studies with a focus on ancient African religious texts, with the intention of shifting the way we view the contributions of people of color to the development of civilization throughout history.

Christina will be presenting at the 43rd Annual Southwest Popular/American Culture Association Conference in Albuquerque, New Mexico, in February 2022. She is a regular contributor to BlackPast.org and the recipient of the Robert and Joan Morgan Nelson Scholarship, which benefits a History or Humanities Major at EWU. Christina is currently applying to graduate programs at several schools. We have no doubts that Christina will succeed in graduate school and generate essential academic work that expands the field of religious studies.