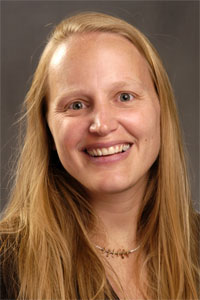 Brandi Reissenweber’s fiction has appeared in Phoebe, The Briar Cliff Review, North Dakota Quarterly and other journals. She was a James C. McCreight Fiction Fellow at the WisconsinInstitute for Creative Writing at the University of Wisconsin—Madison and a writer-in-residenceat the Kerouac Project of Orlando. She is currently at work on a novel.

Notes on "What We’re Sure Of"

My first glimpse of the story was an image: a gaggle of women, all decked out in business casual, standing outside an elementary school while another woman wearing a long cotton skirt walked through the parking lot. I think this image may have come to me because I’d recently moved; after spending most of my adult life in large cities, all of a sudden I was in a town where the evening news regularly ran stories on local high school sports. So I was thinking a lot about what it meant to live in this new place: the culture of yard work, subdivisions, unattached garages and sidewalks that end abruptly because so few people walk.

With that initial image, I’d usually follow the lone woman. She’s a more natural choice for me. But I’d given myself a challenge around the time I was writing this story. I wanted to change things up and make choices that were uncharacteristic of my work, just to see what came of it. So, I went with the clutch of women instead. They seemed unfamiliar and a little daunting, but it wasn’t difficult to find their story. I was intrigued by their abundance and the deeper disatisfactions it might hide; the ways their entanglements might motivate their actions.

This choice also suggested the voice and narrative approach. I’ve long been taken by the collective narrator and the unexpected truths that can be revealed about characters who are on the outside, speculating.

Though the characters are a departure, they are also the point where the story veers right back into familiar territory. I’m drawn to characters who are unsettled, who don’t “fit” in their own relationships or circumstances, who are, for some reason, that one star on the periphery of a constellation. I like the idea of these women leading quiet, dutiful lives and playing out their roles in the community, but also experiencing a strong pull in another direction. Though they all feel it to varying degrees, they don’t share this. Carol Covington and the imagined wrong done to her heighten this pull and give them a cause to rally around. In the end, the noise they make is misdirected, but for a brief time they unshackle from routine and brush up against possibility.

Strangely, “What We’re Sure Of” was whole very early in the writing process. Though I didn’t know the ending when I started, I wrote it as if I did. My process is never that efficient. It’s usually filled with more detours, stops at roadside attractions and scenic routes. I did revise. Extensively. But the trip had more focus. I don’t know if that means anything for the finished story, but it was a very different writing experience.

When I write I often gravitate toward books that buoy my wonder and exploration of whatever knot I’m worrying. With “What We’re Sure Of,” I was conscious of the fact that the collective narration could ramble, sound gimmicky or worse. The voice came so strongly on the heels of the initial image that I knew—for better or worse—that was the direction to take. So I returned to stories that I admire that have a similar narrative approach: Jeffrey Eugenides’ Virgin Suicides, Anthony Doerr’s “For a Long Time This Was Griselda’s Story,” Carson McCullers’ Ballad of the Sad Café. Revisiting them helped me set the compass of this story.

Certain authors I return to again and again. I was astonished by Margaret Atwood’s Cat’s Eye, a book I stumbled upon at the public library when I was younger and chose books solely by their spines while trolling the stacks. I’ve since read much of her fiction, rediscovering with each book that initial astonishment. I read Russell Banks’ novels for the humanity of the characters. They can be genuine and kind hearted, but manage to get in their own way with such damaging results. The Darling still haunts me for the disconnection the narrator feels from her own husband and children; the knot and tangle of culture that she lets stunt the growth of deeper roots.

I’ve lost count of how many times I’ve read Vladimir Nabokov’s Lolita. It’s that devastating, that instructive for me as a writer. I read Cornelius Eady’s poems to remind myself of language’s grace and the way a brief moment on the page can unfold to fill an entire field of vision. I adore the way Andre Dubus III handles tension, particularly in House of Sand and Fog. Nelson Algren’s novels and Mary Gaitskill’s short fiction inspire me to be bold in my writing, to take risks and be unapologetic about my character’s truths and situations. A recent read—Uwem Akpan’s collection Say You’re One of Them—has renewed the urgency of this in my own work. 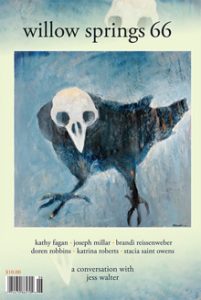 “What We’re Sure Of” by Brandi Reissenweber

Found in Willow Springs 66 Back to Author Profile What We’re Sure Of   The day of Carol Covington’s departure from Whitman Elementary, we wait for our children in SUVs and […]