Two more of our “Fighting Eagles” Cadets from the Eastern Washington University (EWU) Reserve Office Training Corps (ROTC) battalion recently completed Advanced Camp at Fort Knox, Kentucky.  Cadets Jameson Palmer and Andreas Brazier both graduated from Advanced Camp’s 5th Regiment on July 19th.  Not only did these two highly motivated Cadets graduate from Advanced Camp, but they both did so with receiving the highest score of “Outstanding”. 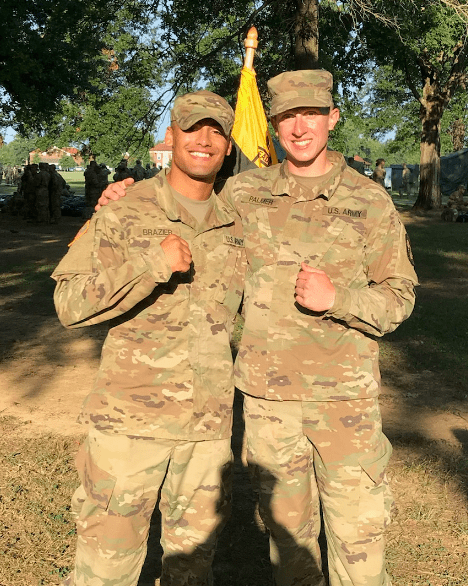 Advanced Camp is Cadet Command’s premier annual training event that assesses Cadets on their ability to conduct basic officer leadership tasks.  Cadets usually attend Advanced Camp during the summer between their junior and senior years of college.  Passing Advanced Camp is a mandatory requirement for all Cadets who want to commission as an officer in the U.S. Army after graduation.

Cadets Brazier and Palmer were our 2nd and 3rd Cadets to complete Advanced Camp this summer.  We still have 18 more “Fighting Eagles” Cadets currently participating in various regiments at Advanced Camp.  Our next Cadets to graduate in 6th Regiment are Megan Baker, Austin Pfennig, and Chad Triplett on July 24th.  With the completion of Advanced Camp Cadet Brazier is on his way to attend follow on training in Hawaii while Cadet Palmer is heading to Ft. Campbell, Kentucky for his follow on training.

Congratulations to both Cadets for not only graduating, but exceling at ROTC’s crucible training event.