You are here: Home / Archives for Memorial Day

Some of our Eastern Washington University (EWU) Reserve Officer Training Corps (ROTC) Cadets were featured in the KREM2 Spokane news for their Memorial Day support:

Seven cadets placed the flags at all of the headstones and saluted each one, according to the EWU website.

One of the Memorial Day activities available to Cadets from the Eastern Washington University (EWU) Reserve Officer Training Corps (ROTC) battalion to volunteer for was to plant flags at the Washington State Veterans Cemetery in Medical Lake.  Seven of our Fighting Eagles Cadets supported the cemetery by planting flags at all the headstones in advance of Memorial Day. The Cadets worked their way around the expansive cemetery planting a flag and saluting each gravestone. 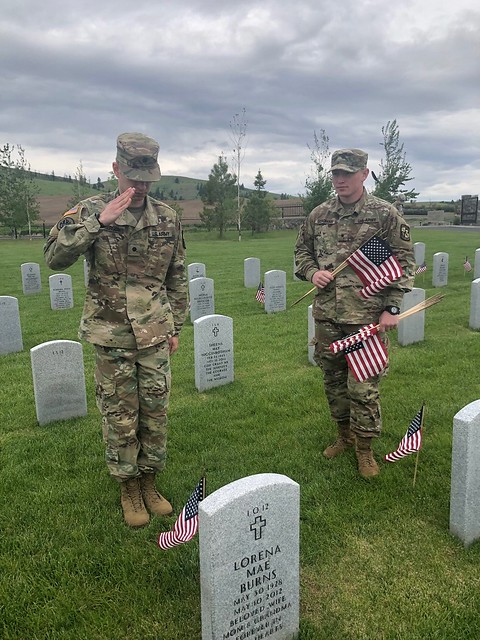 This volunteer initiative is part of the long standing support the EWU ROTC “Fighting Eagles” battalion has provided to the State Veterans Cemetery. 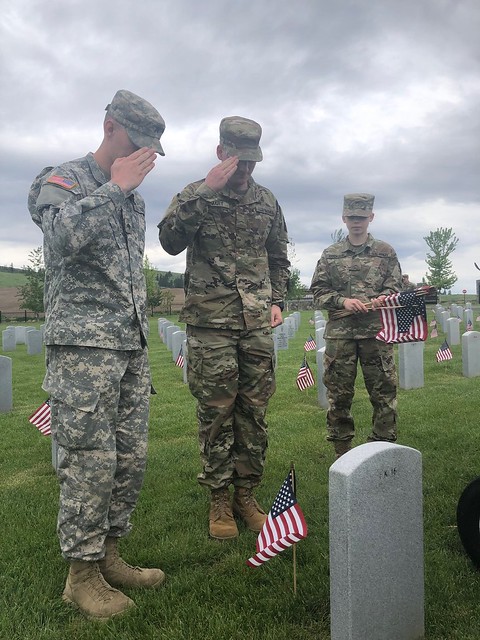 On Monday, May 27th, 2019 the official Memorial Day 2019 Ceremony will begin with a musical prelude at 10:30 AM and the official ceremony beginning at 11:00 AM at the State Veterans Cemetery.  For those that have not been to the cemetery before it is located just outside of Medical Lake:

Parking is available at the cemetery with overflow available along side the entrance road.  Great job by our Fighting Eagles Cadets and our lead Cadet volunteer officer, Melinda Leen for helping the State Veterans Cemetery prepare for the ceremony.

On May 22nd, 2019 the Eastern Washington University (EWU) Reserve Officer Training Corps (ROTC) battalion conducted its first of what is planned to be an annual Fallen Heroes Ceremony in rememberance of the 10 former Cadets and 1 Cadre member from EWU that were killed on combat tours.  The ceremony was held at the Roos Field football stadium on the Eastern campus. 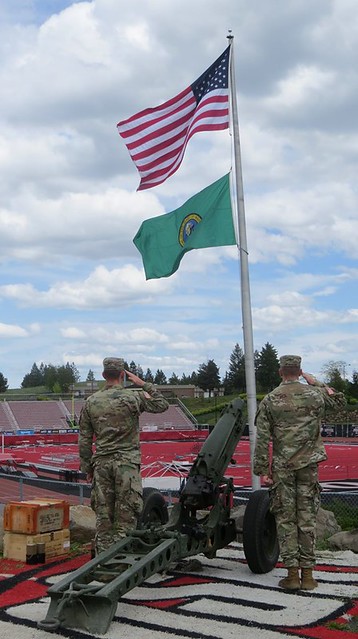 Cannon Crew members Cadet Bryce and Kyle Stanton salute during the playing of the National Anthem.

The Eastern ROTC program known as the “Fighting Eagles” battalion has been producing leaders for the US military since 1952. In the early years of the program all males that attended Eastern had to enroll for two years into ROTC. This caused the program to have over 1,000 Cadets. With the conclusion of the Vietnam War and the end of mandatory military service, Eastern no longer required all males to enroll in ROTC. Today the battalion maintains a size of approximately 100 Cadets. 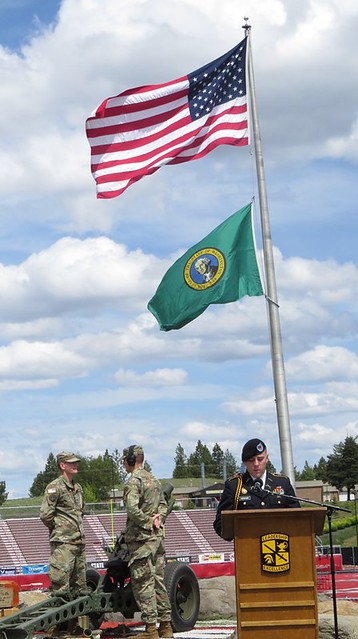 MS-IV Cadet Scott Hinshaw served as the narrator for the Fallen Heroes Ceremony. 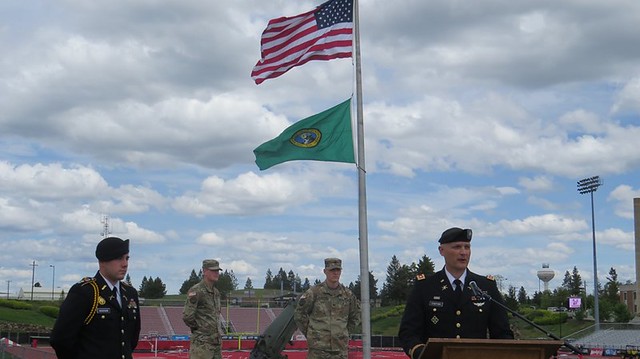 At the ceremony a Table of Honor was set up with biographical plaques for each of our Fallen Heroes: 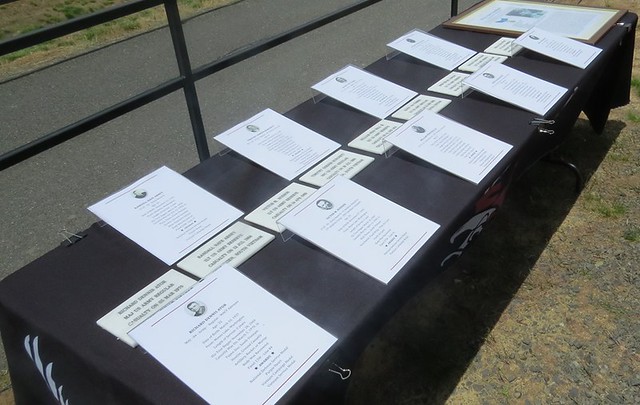 Table of Honor with biography for each Fallen Hero.

Below are the Fallen Heroes from the EWU ROTC battalion with the year they graduated or attended ROTC followed by major awards they received:

During the ceremony a short biography for each Eastern Cadet and Cadre member killed in action was read to the audience.  After the completion of the biography, our historic howitzer that saw combat action in the European theater of World War II was fired in their honor.  Our cannon is usually fired in support of the home football team, but today it was fired 11 times in honor of our university’s Fallen Heroes. 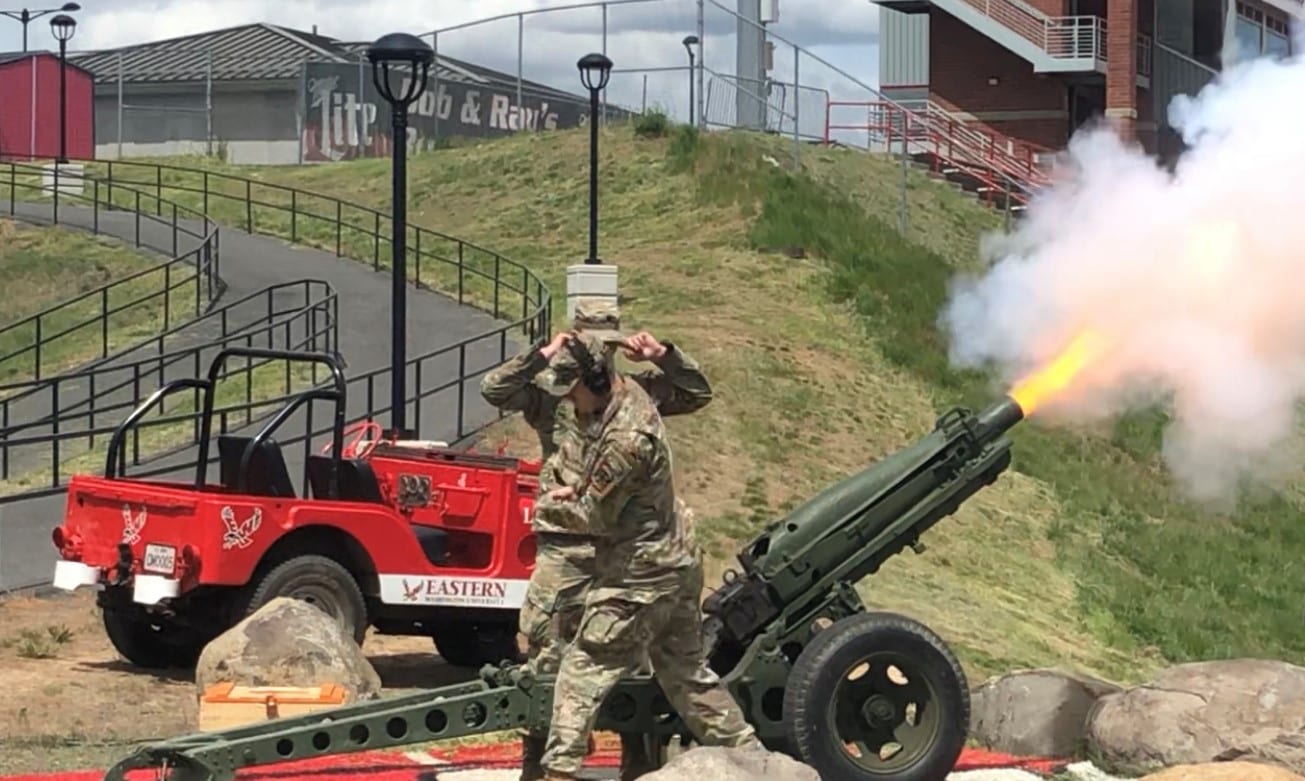 The casualties of war are not only those who died in battle, but also the families they left behind. President Abraham Lincoln, our 16th President, wrote of “…the solemn pride that must be yours to have laid so costly a sacrifice upon the altar of freedom,” in a letter during the Civil War to a mother who lost five sons. Each of the heroes we remembered today all had families that loved them dearly as well.

Please keep them and all the military servicemembers who made the ultimate sacrifice close to your heart this Memorial Day weekend and throughout the rest of the year. 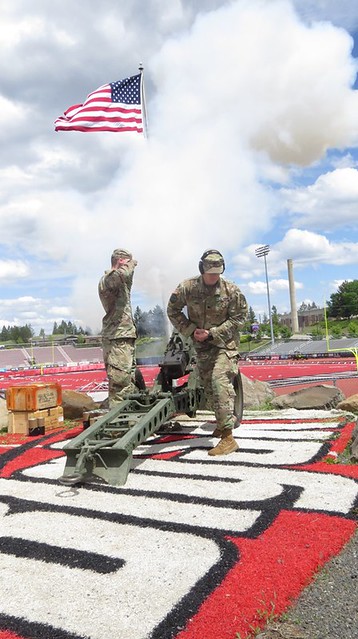