You are here: Home / Cadre Messages / EWU ROTC Contracts 10 Cadets into the US Army In Front of Historic Showalter Hall

On September 20, 2018 the Eastern Washington University (EWU) Reserve Officer Training Corps (ROTC) program contracted 10 Cadets into the US Army.  A Contracting Ceremony was held in front of Showalter Hall which is the oldest building on EWU’s campus.  Showalter Hall was built back in 1915 when EWU was a teacher’s college.  (Note: All the following pictures provided by Mr. Rob Riedel) 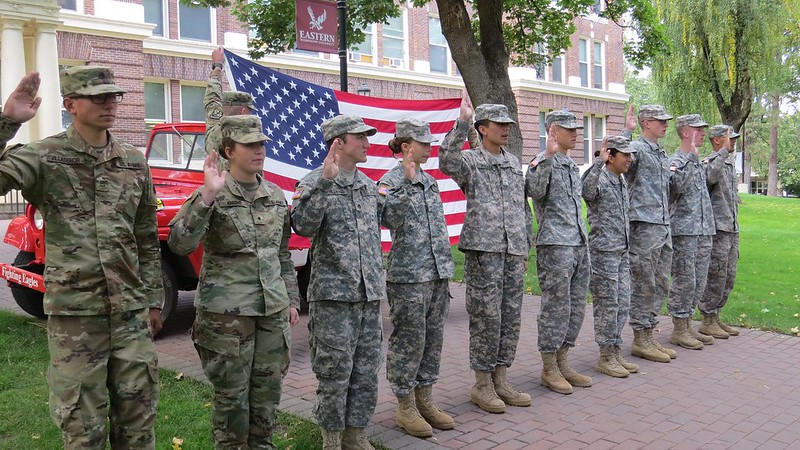 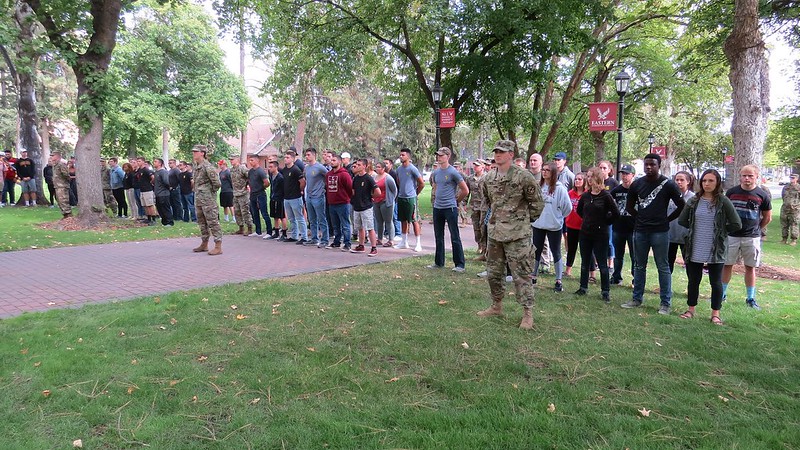 All 10 Cadets recited the Oath of Enlistment given to them by Lieutenant Colonel Jonathan Stafford, the Professor of Military Science and Department Chair for the EWU ROTC program. 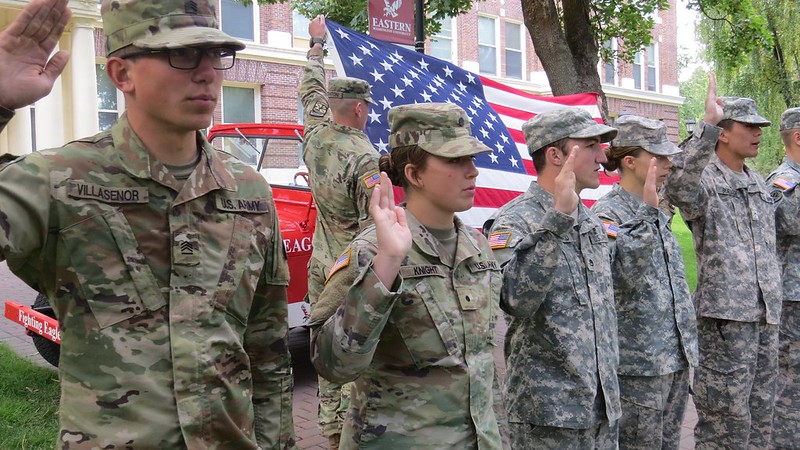 The first Oath of Enlistment was developed during the Revolutionary War when the Continental Congress established different oaths for the enlisted men and officers of the Continental Army.  Here is what the original oath said:

“I _____, do acknowledge the Thirteen United States of America, namely, New Hampshire, Massachusetts Bay, Rhode Island, Connecticut, New York, New Jersey, Pennsylvania, Delaware, Maryland, Virginia, North Carolina, South Carolina, and Georgia, to be free, independent, and sovereign states, and declare, that the people thereof owe no allegiance or obedience to George the third, king of Great Britain; and I renounce, refuse and abjure any allegiance or obedience to him; and I do swear that I will, to the utmost of my power, support, maintain, and defend the said United States against the said king, George the third, and his heirs and successors, and his and their abettors, assistants and adherents; and will serve the said United States in the office of _____, which I now hold, and in any other office which I may hereafter hold by their appointment, or under their authority, with fidelity and honour, and according to the best of my skill and understanding. So help me God.” 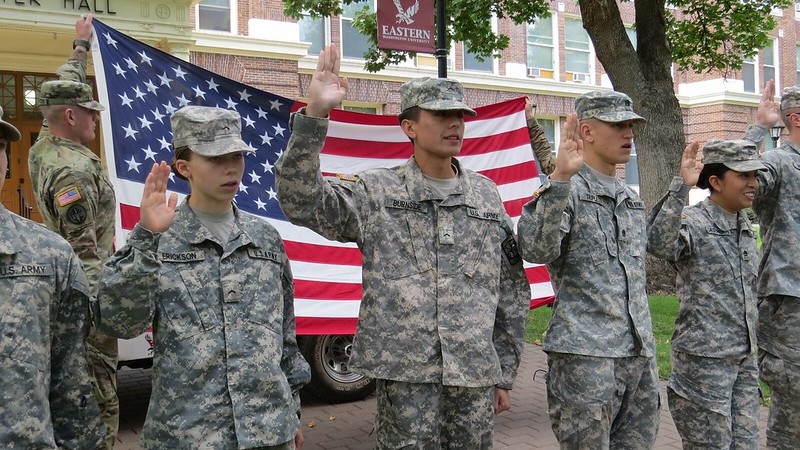 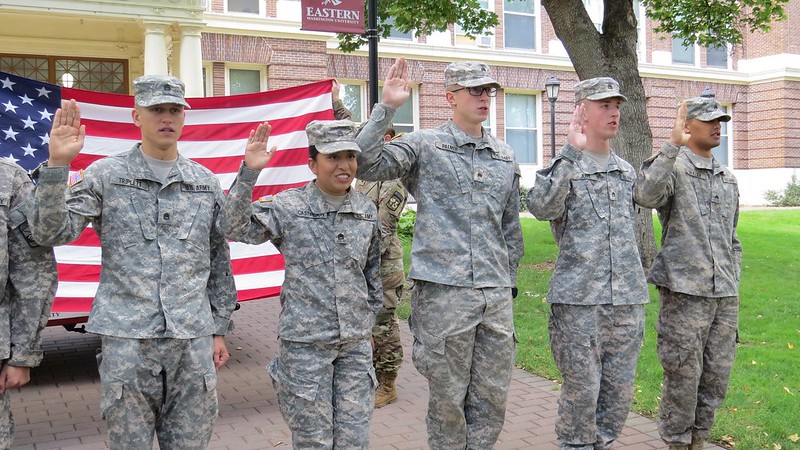 By contracting the Cadets can now activate scholarship benefits, receive a monthly monetary stipend, attend advanced training, and other opportunities to help them towards their goal of becoming a US Army officer after graduating from EWU. 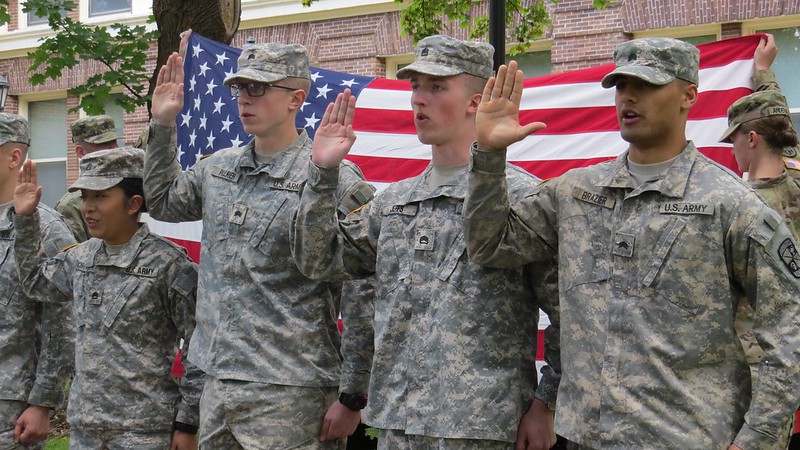 A video of the Contracting Ceremony can be viewed below:

Congratulations to all 10 of our great EWU ROTC Cadets who contracted into the US Army: 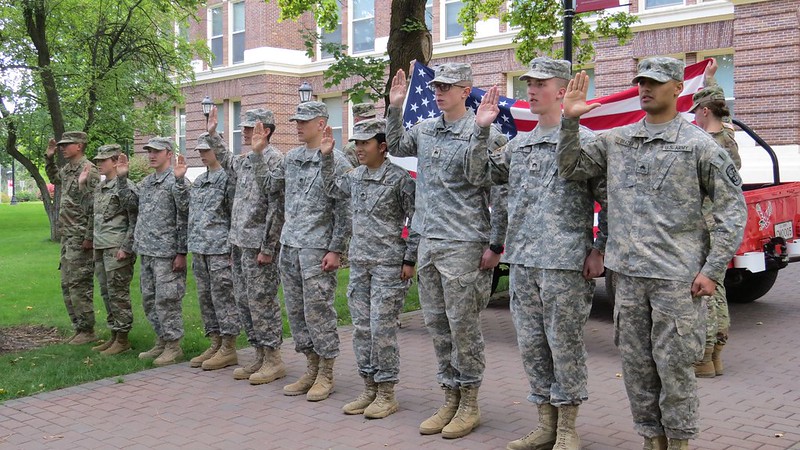