The COVID-19 pandemic has caused much change in the lives of people around the country to include here at Eastern Washington University (EWU).  In response to the pandemic all classes for Spring Quarter have been moved online to include the entire Military Science curriculum.  One of the biggest characteristics of being an Army officer is to be adaptable to changing conditions and the “Fighting Eagles” Cadets of the EWU Army ROTC program are learning that first hand right now.

This first major adaption has been with the unit’s physical training program (PT).  The ROTC program’s mandatory PT sessions are held on Monday, Tuesday, and Thursday mornings.  To keep a sense of normalcy, the ROTC Cadre has kept the PT schedule the same during the pandemic, however the Cadets meet up in a virtual Zoom classroom each morning.

Two Cadets are assigned to lead each PT session for the other Cadets to follow along with over their smartphones.  After the completion of the warmup exercises they then brief the workout plan for each Cadet to complete that day that is also posted on social media:

Great job by Cadet Olmstead (pictured) and Cadet Watters for leading this morning’s EWU Army ROTC physical training conditioning drills over Zoom. Now everyone has to complete the pictured workout 🏋️‍♀️ and post it on to the Strava app. Go and get after it Fighting Eags! #physicaltraining #physicalfitness #warriorleaderswanted #motivation #ewu #armyrotc #workout #workouts #ewurotc #ewu_rotc #fitness #pt #goeags

After the completion of the workout the Cadets then log the workout on to the Strava app. Strava gives the program the ability to track the total distances and times of the exercises for each Cadet.

Another challenge the program faced was being able to conduct Leadership Labs in a way that would still give Cadets the ability to practice platoon level tactics and leadership.  During Spring Break the EWU Army ROTC Cadre experimented with a number of first person gaming platforms to determine one that would best virtually replicate a Leadership Lab.  It was decided that the Fortnite software was the best one to handle the large number of Cadets and give the Cadre the flexibility to build virtual worlds to replicate the terrain the Cadets train in during standard Leadership Labs. 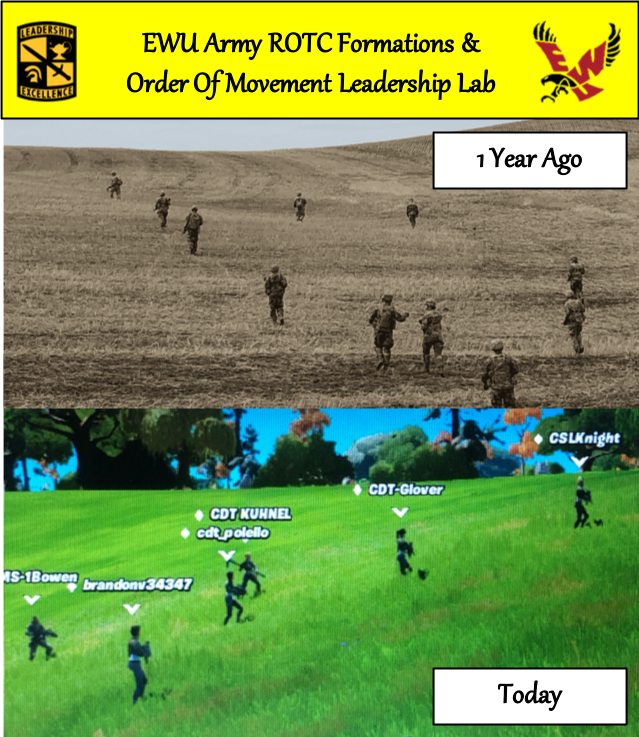 In the first two weeks, Fighting Eagles Cadets have familiarized themselves with the program and conducted a Platoon Formations and Order Of Movement (FOOM) training, practiced actions when crossing a Linear Danger Areas (LDA), and Actions on Contact (AoC).

The Cadets are divided up into three different platoons and enter their assigned virtual world accompanied by a cadre member and a MS-IV Cadet evaluator to guide and assess them.  Inside the virtual world the Cadets are evaluated on how they perform their movements and tactics as if they were in the real world.  During the lab the Cadets communicate with each other through the Discord app.  This allows Cadets in leadership positions to perform their Troop Leading Procedures (TLP’s) and give out orders during the platoon training lanes. 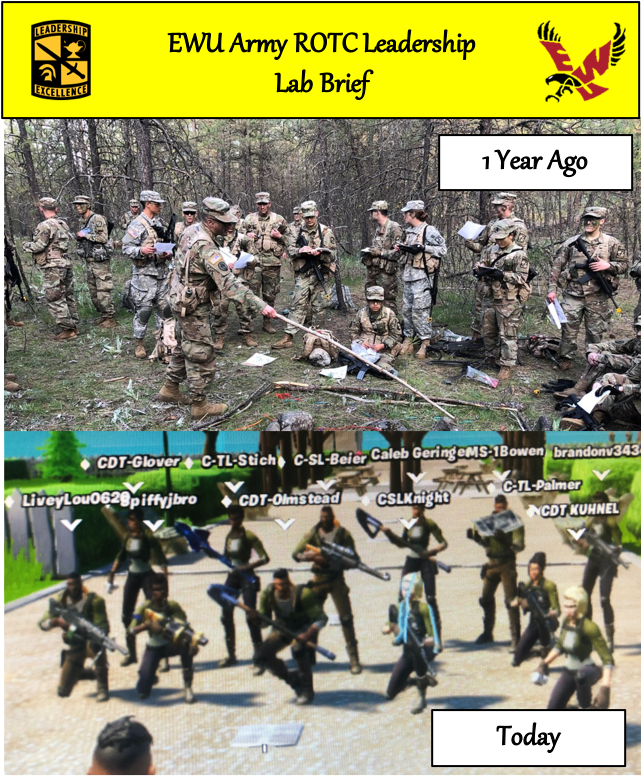 The current pandemic has created a challenging training environment, but part of leadership is overcoming adversity.  Former General of the Army, George C. Marshall understood this very well:

The lack of equipment, the lack of food, the lack of this or that are only excuses; the real leader displays his quality in his triumphs over adversity, however great it may be.”
– General of the Army George C Marshall, and former Secretary of State & Secretary of Defense

Despite the limitations caused by the current pandemic, EWU Army ROTC leadership is committed to providing the highest quality training possible to prepare our Cadets to become future Army leaders.  If you want to explore a Military Science course, it is still possible to sign up for ROTC this Spring Quarter.  If you are interested in joining us in one of our virtual classes, physical training workouts, or Leadership Labs please contact us using this link or email us at rotc@ewu.edu to learn more.