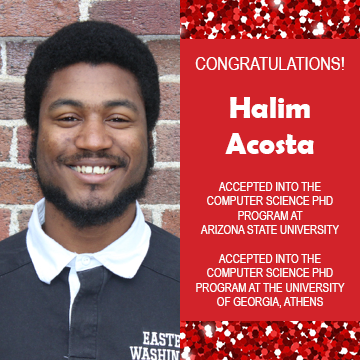 Congratulations to EWU McNair Scholar Halim Acosta! Halim has been accepted into the Computer Science PhD program at Arizona State University with full funding, and into the Computer Science PhD program at the University of Georgia, Athens! Halim is a senior at Eastern Washington University majoring in Computer Science. To prepare for graduate school Halim completed a summer research internship in 2019 through the EWU McNair Scholars Program. With mentor Dr. Yun Tian, Halim worked on an algorithm to find a solution to the ride-share problem. To read more about Halim and his research, check out his page on the EWU McNair website.

We are so proud of Halim and excited for his next steps towards attaining his PhD!