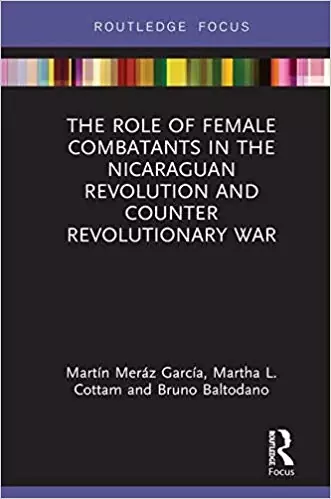 We congratulate two of our EWU McNair Alum for their academic success. This book is a qualitative study based on 85 interviews with female ex-combatants in the revolution and counter-revolution from the 1960s to the end of the 1980s, as well as field observations in Nicaragua and the autonomous regions of the Atlantic Coast. It explores the reasons why women fought, the sacrifices they made, their treatment by male combatants, and their insights into the impact of the revolution and counter-revolution on today’s Nicaragua.

Dr. Martín Meráz García is a Professor and the Interim Program Director of Chicana/o/x Studies at Eastern Washington University. He was a part of the 1998-1999 cohort of McNair Scholars at EWU. He received his Master’s in Criminal Justice in 2003 and a PhD in Political Science in 2007, both from Washington State University. Currently, he is a fellow with the New Leadership Academy at the University of Michigan, Ann Arbor.

Dr. Baltodano is a Professor of Political Science at Florida SouthWestern State College. He was a part of the 2003 McNair Scholars cohort at Eastern Washington University and received both his Masters and Ph.D. from Washington State University. His primary research interests are insurgencies and political violence. He has been a contributing writer on books on the Sunni Awakening in Iraq, the Israeli-Palestinian Conflict, the civil police in Nicaragua, and on journal articles about the Sandinista Revolution.

We are so proud of all of the accomplishments of Dr. Baltodano and Dr. Meráz García!