You are here: Home / Archives for Operation Agile Leader

From 2-5 April 2021 Cadets from the Fight Eagles and Bulldog Army ROTC Battalions deployed out to Camp Seven Mile, Washington to conduct Phase 2 of Operation Agile Leader (OAL).  The two battalions are composed of Cadets from Eastern Washington University, Gonzaga University, Whitworth University, and Washington State University-Spokane College of Nursing.  OAL was developed by U.S. Army Cadet Command to train senior Cadets on skills that were traditionally trained at Advanced Camp at Fort Knox, Kentucky that was cancelled last summer due to the pandemic.  This skills are instead trained at the regional level with combined FTX’s with nearby ROTC programs.  Operation Agile Leader is the top priority this year for the U.S. Army Cadet Command.  Phase 1 of OAL was completed back in October 2020 and Phase II completes the remainder of the training tasks the Cadets missed by not attending Advanced Camp. 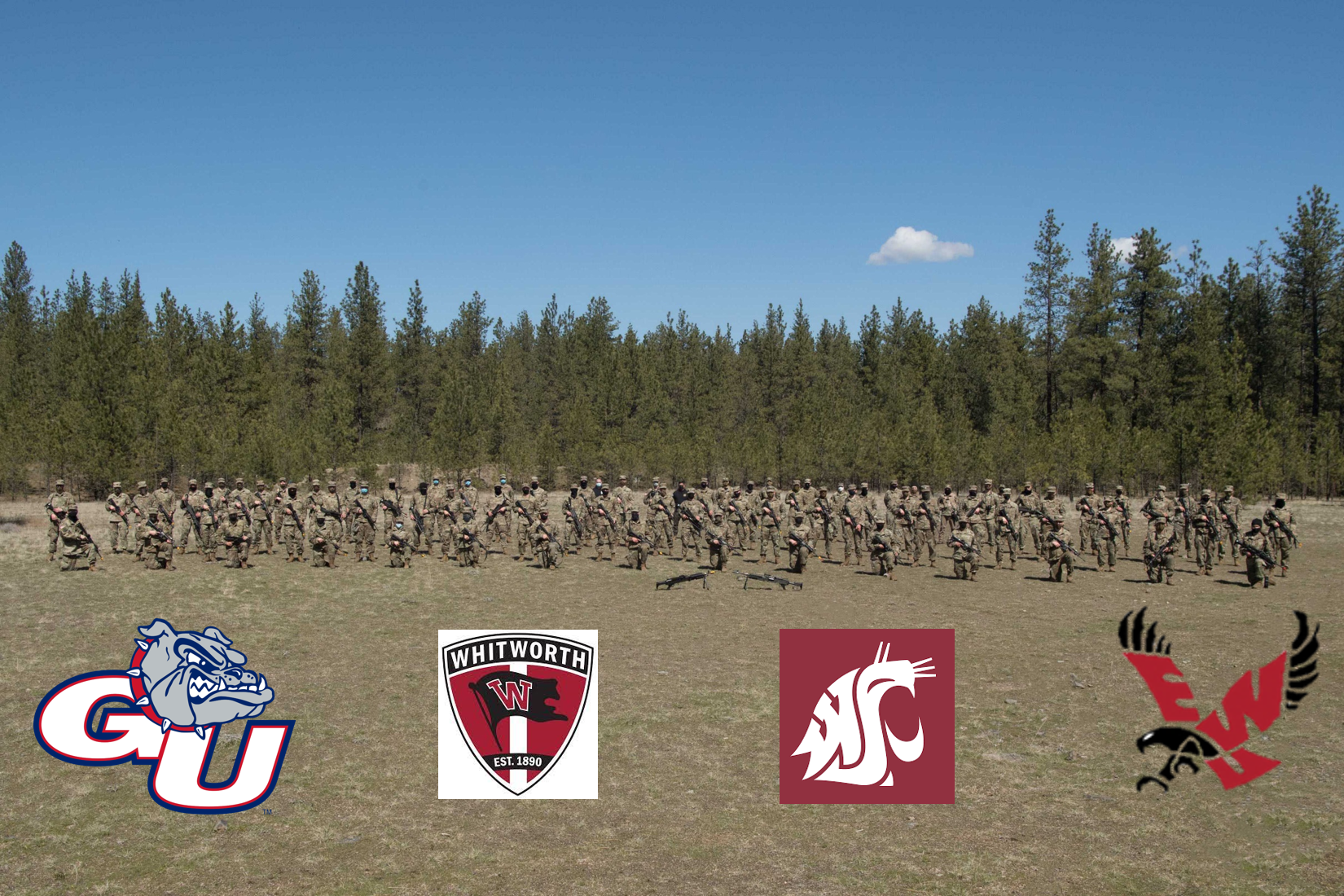 On the first day of the FTX the Fighting Eagles Cadets had a very early 4:45 AM formation at Cadet Hall to draw equipment and gear.  The Cadets then boarded buses at 5:30 AM to first go to Gonzaga University to draw weapons before one group departed to Camp Seven Mile and another to the Medical Lake Range.

The The tasks for the Cadets at the range was to zero their M4 rifle and then qualify using the Army’s new marksmanship standards.  After the Cadets qualified they then had to attend Call For Fire Training (CFFT).  During this training the Cadets learned how to call in artillery fire on an enemy’s position.  After attending the training they than had to pass a practical exercise by calling in fire using a terrain model.

Back at Camp Seven Mile the group of Cadets there conducted day land navigation training.  Each Cadet had to look for three points spread out over an extremely large wooded and hilly area. The Cadets had to successfully find 2 of the 3 points within the allotted time in order to pass the course.

Following the completion of the day land navigation course the Cadets that afternoon conducted grenade familiarization training.  During the training the Cadets learned how to hold, arm, and throw training hand grenades.

Following the completion of this training the Cadets then conducted a buddy team fire and maneuver course.  During the course two Cadets would bound forward and fire their blanks at simulated enemies.  At the end of the course each Cadet then had to throw a hand grenade simulator at a bunker to try and destroy it.

Easter Sunday occurred during the OAL FTX.  Gonzaga University was able to support those who recognize Easter with a field service.  Father Dan Mai traveled out to Camp Seven Mile and set up a field ministry in the middle of the forest for Cadets to participate.  We appreciate Father Mai for supporting the Cadets during the OAL FTX.

For Days 3 & 4 the Cadets moved into the Platoon Situational Training Exercise (STX) lanes of the OAL FTX.  During these two days the Cadets were divided up into three platoons and had to conduct platoon level recon, ambush, attack, movement-to-contact, and defense lanes.  MS-IV Cadets that needed to complete their OAL requirements and MS-III Cadets attending Advanced Camp this summer filled into the key leadership positions.  The training in these leadership positions provided all them valuable experience for future training.

Following the completion of Platoon STX lanes training the Cadets then reassembled at the major holding area to begin weapons cleaning.  Cleaning weapons is an important recovery activity after any FTX since the weapons are turned in to the Washington National Guard.

After completing weapons cleaning, the Cadets then tore down the Tactical Operations Center (TOC) tents and prepped their gear for movement.  They then walked with their gear to the loading up point to take buses back to their respective universities.

Overall the OAL #2 FTX was a fantastic training event for the Cadets that participated from all four universities.  Congratulations to all our MS-IV Cadets that received their Advanced Camp credit to commission as Army officers this year.  Additionally the FTX provided great training for all the MS-III Cadets that are heading off to Advanced Camp this summer.   Great job by all the Cadets involved who are clearly better prepare to succeed in ROTC than before the FTX.  Eagle Strong!

Note: You can view and download many more pictures from the FTX on our EWU Army ROTC Flickr page.

Between 9-12 October 2020 Cadets from both the Eastern Washington University (EWU) and the Gonzaga University (GU) Army Reserve Officer Training Corps (ROTC) programs conducted their first Operation Agile Leader (OAL) Field Training Exercise (FTX).  OAL FTX’s are being held around the country to evaluate fourth year Cadets on critical skills they were not trained on due to the cancellation of Advanced Camp this past summer due to the ongoing COVID-19 pandemic.  Instead the Cadets are being trained at the regional level with combined FTX’s with nearby ROTC programs.  Operation Agile Leader is the top priority this year for the U.S. Army Cadet Command.

The OAL FTX began on the early morning hours of October 9th with the Cadets from EWU and GU into three 3-person platoons at different locations on campus.  These three platoons the Cadets would remain in throughout the FTX at different locations to avoid a large gathering.  Additionally the Cadets all wore masks, were issued their own bottle of hand sanitizer, and practiced social distancing to further mitigate any COVID spread.  At EWU the platoons then rotated to draw gear, their weapons, and Meals Ready to Eat (MRE) from the Cadet Hall supply room.  After being issued all their necessary gear the platoons were then transported on different buses to separate training locations to begin the FTX.

For the first three days of the Operation Agile Leader FTX, the platoons would rotate through three different training events.  The first training event was held at the Department of Corrections Range in Medical Lake.  There Cadets conducted Basic Rifle Marksmanship (BRM) qualification.

In addition to qualifying on their weapon, the Cadets additionally conducted testing on important first aid skills.  Cadets were evaluated on their ability to diagnose and treat injuries and then had to evacuate a casualty.

The second training station was located a Camp Seven Mile just north of Spokane.  Camp Seven Mile is an expansive forested area owned by the military adjacent to Riverside State Park.  The large federal land area is a legacy of the Civilian Conservation Corps (CCC).  Beginning in 1933, all the trails and bridge improvements in Riverside State Park were made by the CCC 949 Company that was based here.

During World War II the CCC was disbanded and the land was given to the military as a training base.  EWU and Gonzaga ROTC plus other local military units still use this land today to train on.

At Camp Seven Mile the other two platoons were transported to separate locations to conduct different training events.  One platoon began their day of training by conducting a six mile ruck march around the Camp Seven Mile property.  Cadets had to complete the ruck march in under 2 hours.

Following the ruck march the platoon then moved into Land Navigation testing.  The first test they had to take was a written land nav test.  Following the written test the Cadets then were given grid points to plot on a map and then try attempt to locate during the day time.  After the completion of the day land nav testing the Cadets then waited until it was night time and they were then issued grid points to plot in the darkness and locate at night.

The other platoon at Camp Seven Mile conducted tactics and battle drills training.  Due to the long summer layoff the training was used as a refresher course for the Cadets on tactics prior to conducting platoon level Situational Training Exercise (STX) lanes on the fourth day of the FTX.

After the first day of the Operation Agile Leader FTX, the weather would become an enormous factor with heavy rain, wind, and cold temperatures for days two and three of the FTX.  This forced the Cadets to learn how to keep themselves and their equipment dry in the inclement conditions.  The Cadets also learned how to create shelter using their ponchos to try and stay dry at night and get some sleep in the rain.

After an extremely difficult night of sleeping in the rain, the Cadets woke up to day four of the FTX with partly cloudy skies and no rain.  This ensured that there would be a great day of training for the Cadets.  On day four each platoon conducted Platoon STX lanes at separate locations at Camp Seven Mile.  The lanes focused on conducting recons, ambushes, and movement to contact.  During these lanes the MS-IV Cadets were evaluated by Cadre members on their performance.  Getting a “Go” on the lanes would bring the Cadet one step closer to receiving Advanced Camp credit to commission later in the academic year.

Conclusion of a Great Exercise

After a full four days of training Operation Agile Leader came to an end for the Cadets.  For the Cadets, outside of Advanced Camp, this will likely be the longest field training exercise they will ever do in ROTC. The Cadets however, will get to do it all over again in April when EWU and GU Army ROTC programs, conduct its second OAL FTX to complete all the remaining training tasks for the MS-IV Cadets.  We look forward to executing another awesome FTX with some of the best future leaders of the U.S. Army.

It is not too late to sign up for ROTC and experience the award winning leadership training offered by the EWU Army ROTC program.  There are no prerequisites for joining.  Contact us at rotc@ewu.edu or 509-359-6110 to determine which Military Science class is best for you.  Scholarships are available!  Contact us today to learn more.

Note: More pictures from the Operation Agile Leader FTX can be seen and downloaded from the EWU ROTC Flickr page.