Join the EWU McNair Scholars' Program for our first Scholar Cafe of the fall 2019 Quarter! We are honored to welcome Regents Professor & Executive Director of the Simon A. Levin Mathematical, Computational and Modeling Sciences Center, Dr. Carlos Castillo-Chavez. 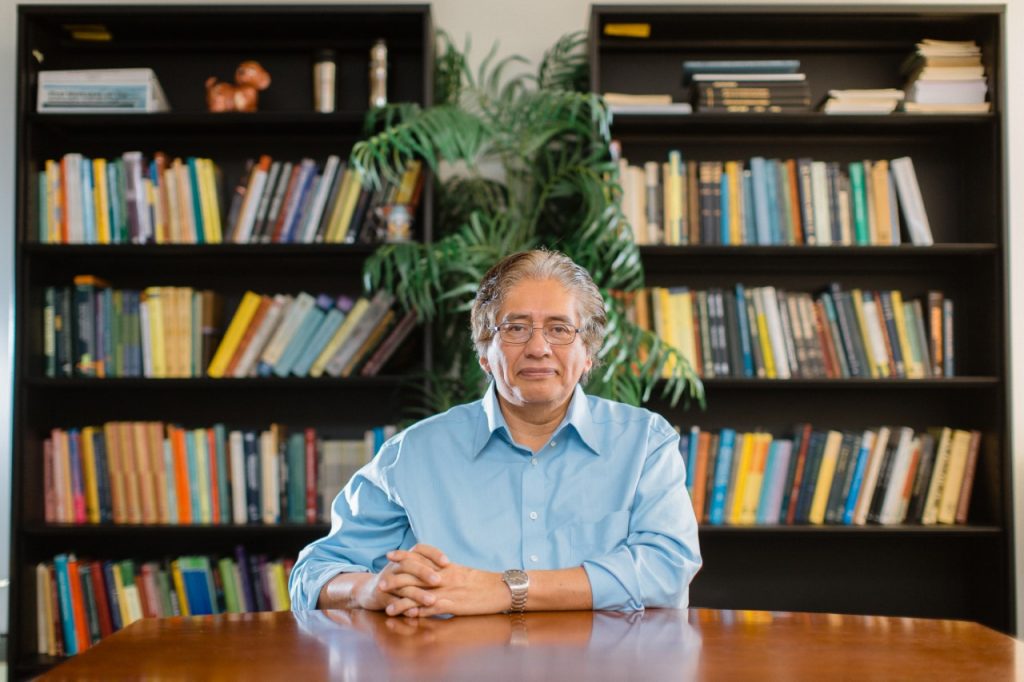 Learn more about his incredible story....

Dr. Carlos Castillo-Chavez is the Emeritus and Founding Director of the Simon A. Levin Mathematical and Computational Modeling Sciences Center (SAL-MCMSC), a Regents Professor, a Joaquin Bustoz Jr. Professor of Mathematical Biology and a Distinguished Sustainability Scientist at Arizona State University (ASU).  Dr. Carlos Castillo-Chavez has been an active member on national committees for the National Science Foundation, National Academy of Sciences and National Institutes of Health. For example, NSF’s Advisory Committee’s included the Committee for Education, Human Resources (2016-2022) and the NSF’s Cyber Infrastructure Advisory Boards (2016-2019). Other past committees include, the National Research Council’s Board of Higher Education and Workforce (2009-2015), and President Barack Obama Committee on the National Medal of Science (2010-15). While at Cornell University, he became member and co-chair of the Faculty Council of Representatives standing committee in affirmative action (1990-1996), established as a result of Walter Cohen and Henry Louis Gates’ report, “The Crisis of Minority Faculty at Cornell.”

Dr. Carlos Castillo-Chavez’ recognitions to his work include: three White House Awards (1992,1997, and 2011), the 12th American Mathematical Society Distinguished Public Service Award in 2010, the 2007 AAAS Mentor award, the 17th recipient of the SIAM Prize for Distinguished Service to the Profession and Distinguished Alumni by UW Stevens Point. He is a fellow of the AAAS (American Association for the Advancement of Science); SIAM (Society for Industrial and Applied Mathematics; Founding Fellow of the AMS (American Mathematical Society); and fellow of ACE (American College of Epidemiology).

Carlos Castillo-Chavez has given 518 invited presentations, in 35 countries and visited over 300 cities. He has 259 academic research articles, numerous non-research articles and technical reports, and 19 books or edited volumes. He has published in over 80 distinct journals. Over his 30 years in academia, 18 at Cornell University and 16 at Arizona State University, he has mentored 49 PhD students including 20 women, 28 from US underrepresented groups, 25 USA underrepresented minorities and 7 from Latin America placing him, according to the Math Genealogy Project among the top 200 mentors in the history of mathematics. He has also mentored 29 postdoctoral students and several young researchers. 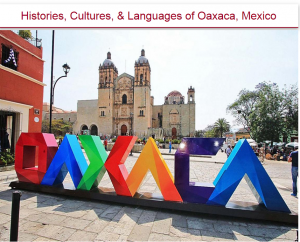 On May 29th, we will hold our final Scholar Cafe for the 2019 Spring Quarter! Curious about studying abroad and making international connections as an academic? Join faculty members, Dr. Nydia Martinez and Dr. Gina Petrie on Wednesday, May 29th at the McNair Scholar Café. Dr. Nydia Martinez is an assistant professor of Chicanx Studies. Her research interests are in research interests are in twentieth-century Mexican history, Mexican American (Chicana/o) history, Latin American history, borderlands history, Third World Liberation movements, gender, and transnational history. Dr. Gina Petrie is the coordinator of the English as a Second Language Program and an English Language Specialist with the U.S. State Department, which supports teachers globally with teaching English for Specific Purposes. Drs. Martinez and Petrie will be joining us to talk about opportunities for students interested in studying abroad with the Oaxaca Program at EWU.

Refreshments and coffee are provided, feel free to bring your lunch! 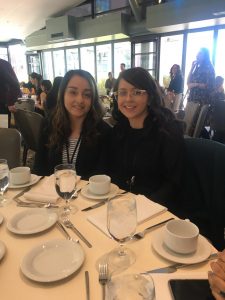 EWU McNair 2018 summer research interns, Rosa Espinosa-Zunigaand Marixza Torres, recently represented Eastern Washington University at the National Latina Psychological Association Conference in LaJolla, CA. This professional conference included prominent Latinx psychologists from around the country along with graduate students and a handful of undergraduates like Ms. Torres and Ms. Espinosa-Zuniga, who both presented posters showcasing their McNair research internship projects. Ms. Torres’s poster was titled Needs and Challenges of Latinx Families of Children with Autism, and presented the results of the McNair project she completed with the guidance of her McNair faculty research mentor, Dr. Christina Torres, EWU McNair Director. Ms. Espinosa-Zuniga’s poster was titled Gratitude, Spirituality and Religiosity in the Aging Population, and showcased the results of the project she conducted with her McNair research mentor, Dr. Phillip Watkins, EWU professor of psychology.

Max and Rosa are both majoring in psychology, and were encouraged to submit abstracts to the NPLA conference by Dr. Nallelly Galvan, a fellow EWU McNair Scholar psychology alumna who conducted her McNair research internship with Dr. Russell Kolts. She earned her bachelor’s degree from EWU and then continuing her education to earn a master’s degree from Indiana University in Counseling Psychology, as well as an educational specialist degree in Community Mental Health and Public Health. She then completed her PhD in Counseling Psychology from the University of Illinois, and accepted a position with the U.S. Department of Justice as a staff psychologist and served as the suicide prevention program coordinator at a medical center for female offenders. Currently within the agency, she is the coordinator of the only federal residential drug abuse program designed for monolingual Spanish speaking female offenders which she developed and implemented, and for which she was the recipient of a prestigious national award within the agency in 2014.

This June Ariel McMillan presented her research, “Perceptions of Oppression White Students of Eastern Washington University,” at the National Conference on Race & Ethnicity In American Higher Education in San Francisco, California. Ariel attended the conference as a student scholarship recipient and says that the conference experience “was beyond productive and insightful!” 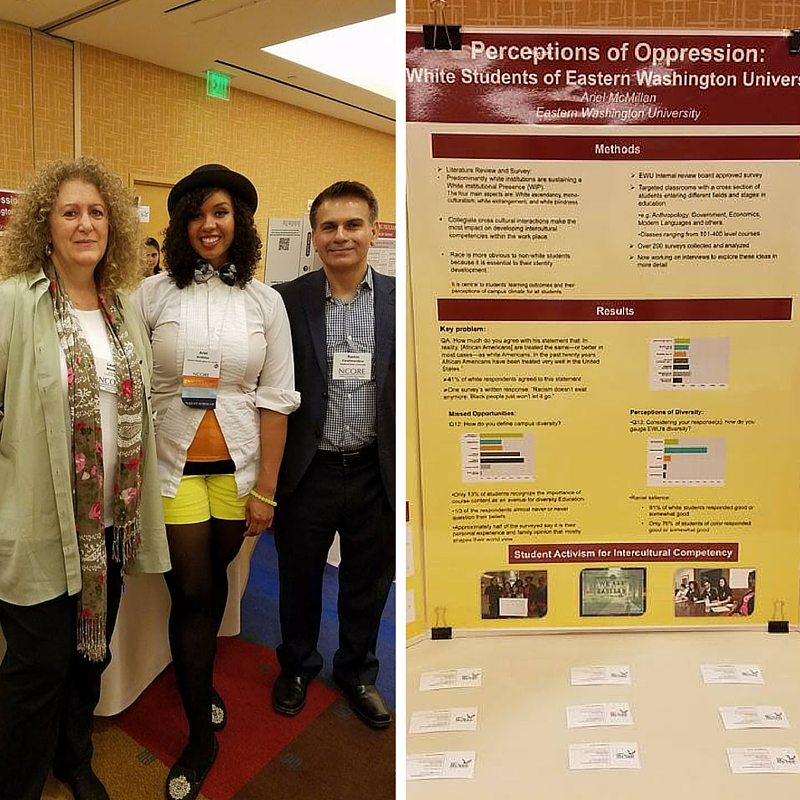 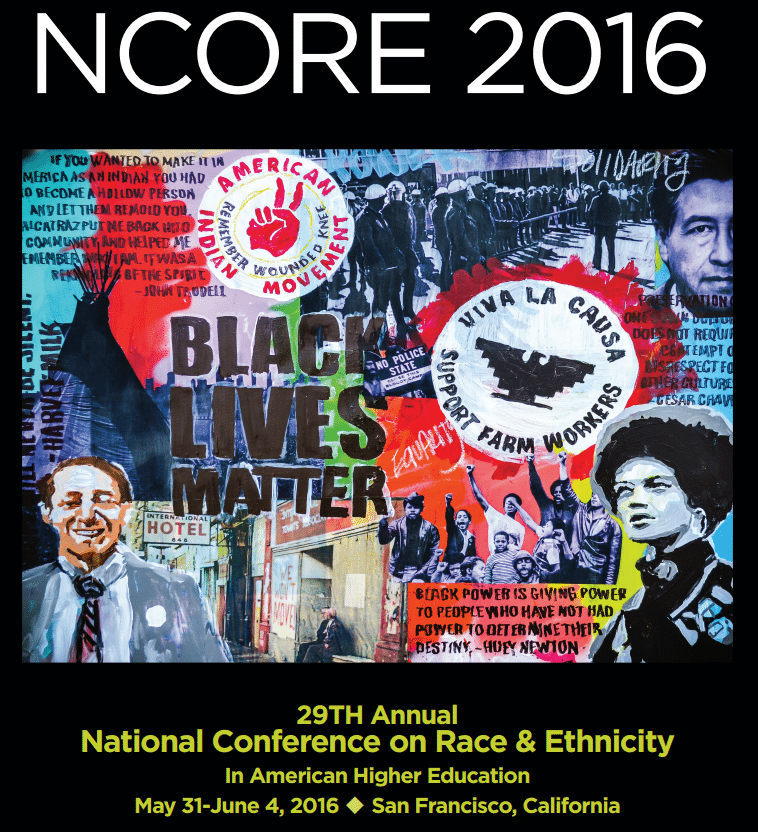 As the Fall Quarter kicks off the EWU McNair Scholars are finishing up their summer research projects and are preparing to apply to graduate programs. If you haven’t had a chance to meet the scholars make sure to check out our Fall Newsletter (in its awesome new format!) to get to know the new cohort and see what they have been up to all summer.

We would like to send a big THANK YOU to everyone who was at our 20th Annual McNair May Gathering!

Photos from the event are available on Flickr by clicking the photo below.