Suzanne Highland is a queer writer and teacher from Florida currently living in New York. She has an MFA in Poetry from Hunter College, where she received the Miriam Weinberg Richter Memorial Award in 2016. She has also received support from the Sundress Academy of the Arts, the Vermont Studio Center, and Brooklyn Poets, where she was a fellow in the summer of 2018. Her poetry has been published or is forthcoming in Redivider, Yalobusha Review, Cosmonauts Avenue, glitterMOB, and Bomb Cyclone, among others. She teaches critical writing to high schoolers as well as composition at Hunter College, and she is a mentor and teaching artist with Urban Word NYC. Online at suzannehighland.com and @emotingsweater.

Notes on “The Collector”

I wrote a first draft of “The Collector” at the beginning of 2016 and it’s gone through ten or eleven different revisions since then, which, I don’t know, is that a lot? It’s a lot for me. The first draft started in a story my mom told me—that as a child I would walk around the house, pick up all the drink coasters, and put them into a perfectly aligned, perfectly stacked tower—and even though the coasters themselves disappeared by the third-ish draft, they were the wellspring I kept returning to: the question of gathering, accumulating, like or unlike data and trying to keep it all in one place, and for what? As the draft developed, the question developed, and this “you” came in, but not until later—the poem’s opening line, “When you came close enough, I wore you like a raincoat”, was in the second to last stanza in the first draft. Then I read “Deep Lane” by Mark Doty, the “Deep Lane” that begins “November and this road’s tunnel”, and the line “I have a lake in me” became part of the emotional fabric of my poem. In later revisions the “you” climbs closer to the top and the speaker keeps reaching and reaching… The poem turned out to be about obsession, I guess. I gather things—literal things, but also memories, experiences—in an attempt to cohere with them, to draw a border around the self, in order to understand it. And I think a lot of people do this, either gather or let themselves be gathered, even by other people, even trying to align with them, to evaporate into them, because it’s uncomfortable and painful to obsess over your loose ends. The poem wasn’t hard to write, but thinking about what it means that it’s out in the world is hard. Writing it taught me that the interior lake is deep.

I’ve had “Assume Form” by James Blake on repeat the past few weeks, another beautiful album from the world’s last excellent man. I’ve also been listening to Clara Rockmore, the theremin player, which, if you haven’t heard someone play the theremin before, get ready to feel haunted. When I’m walking around the city, I’m listening to A Tribe Called Quest. And I’ve been building a playlist that’s mostly alternative women artists and women-fronted bands from the 90s: Björk, Hole, PJ Harvey, Alanis Morissette.

I’m eating chocolate Newman-Os right this minute, and I still drink the beer I drank in college. I’m a creature of habit.

I have two tattoos: one says “in medias res” and the other says “(write it!).” I’m wildly attached to both, but one would have to be to get tattoos like those in the first place, I think. I want to get another, more complicated one, but honestly, dropping hundreds of dollars on anything is an anxious act for me. I need to be paid fair wages. That’s not a statement about tattoos, really. See: austerity at large public higher ed institutions in New York City, elsewhere, everywhere.

I just moved in with a friend with a dog who has almost the exact same black and white patterned coat as my cat, so my domestic life has become an incredible series of photo ops. Their relationship—first time living with another animal, let alone their sworn enemy—is also teaching me a lot about communication. They’re bad at it, but they try desperately to talk to one another, and it’s kind of endearing and hopeful to watch, even when it’s evident they’re coming from two different experiences and with two different ways of being. And they can be sweet to each other still. A tonic for a rough era. 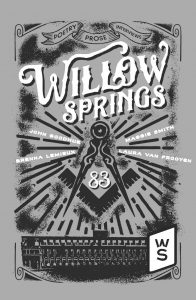 “The Collector” by Suzanne Highland

Found in Willow Springs 83 Back to Author Profile When you came close enough, I wore you like a raincoat. Black lakes, big hands, a party   you ignored me at. […]