Roy Bentley was a finalist for the Miller Williams prize for Walking with Eve in the Loved City, is the author of eight books; including American Loneliness from Lost Horse Press, who is bringing out a new & selected in 2021. He is the recipient of a Creative Writing Fellowship from the National Endowment for the Arts and fellowships from the Florida Division of Cultural Affairs and the Ohio Arts Council. Poems have appeared in The Southern Review, Crazyhorse, Shenandoah, and Prairie Schooner among others. Hillbilly Guilt, his latest, won the 2019 Hidden River Arts / Willow Run Poetry Book Award.

Notes on “A Human Heart, Left Aboard, Sends Airplane Back to Where it Started” and “Fallout, or the Mother Tongue of Pinocchio Was the Wind Through the Trees”

“A Human Heart, Left Aboard, Sends Airplane Back to Where It Started” was a headline in The New York Times that struck me. Over the years, I’ve flown more than a few times, many times experiencing delays. Which is where I elected to start: with the pilot’s uber-authoritative voice blossoming into an explanation for turning the plane around. The heart that’s “in with the luggage” is the turn of the poem—where the poem coalesced. After I finished, it occurred to me that I was giddy-glad that an airline would behave in this way, regardless of inconvenience.

“Fallout, or The Mother Tongue of Pinocchio Was the Wind through the Trees” wrestles with the events I lived through as a small boy around the time of the Cuban Missile Crisis—I’d have been 8 years old that October. I’ve tried to recreate what we had to contend with, and to recreate discovering what it is to be a boy at the moment the narrator’s life is threatened by the events of those days, aided by the odd detail of the bomb shelter model—which actually opened business and took orders that autumn. Gepetto has always fascinated me. Inspired me—I mean, all he wanted was a child. I love that, whatever else, he represents the creative impulse in males.

I have a tiger-descending tattoo the size of a big man’s hand above (and on) my left breast. Why did I get a tattoo? I wanted a tattoo somewhere on the body that many tattoo artists tend to avoid because of the pain. (I’d left a relationship that ended badly; I was numb and hoped the tattooing would jolt my consciousness into something approaching awareness—it took about 4 hours to get it done. And it worked.) The experience changed how I viewed my body. Twenty years later, the tiger has held up well enough that it often occurs to me that one backfoot is just wrong!

I recently finished a Michael Connelly novel. Haven’t jumped into anything else, as I’ve been readying copy for the catalogue promotion of a new & selected called My Mother’s Red Ford, which Lost Horse Press is bringing out next year. (Trying to stay sane in these insane times.) 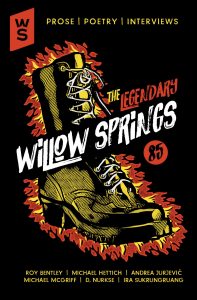 “A Human Heart, Left Aboard, Sends Airplane Back to Where It Started” and “Fallout, or the Mother Tongue of Pinocchio Was the Wind Through the Trees” by Roy Bentley

Found in Willow Springs 85 Back to Author Profile “A Human Heart, Left Aboard, Sends Airplane Back to Where it Started”   THIS WAS A PILOT coming on the intercom: Good […]