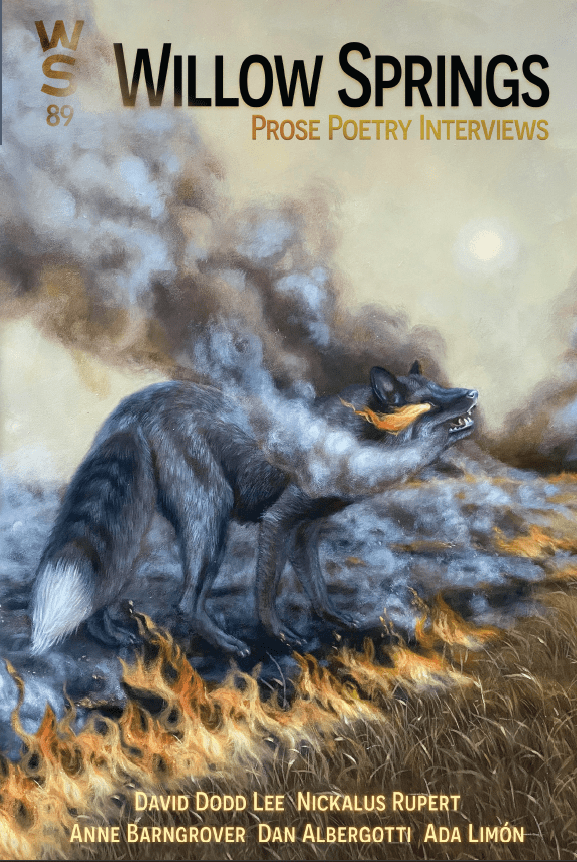 The first time I watched it, I remember being floored

kind of liked, even though I maybe wasn’t supposed

to, because she wanted what she could name—

really shoots off the Forest Spirit’s head. I didn’t believe

she’d follow through with it once she sees him

with her own eyes. Now I’m like, Seems about right.

I suppose we all want to show everyone we know

how to kill a god of life and death. We can all be

short-sighted sometimes, and we’ll do anything

to feel in control. I thought about the Night-Walker,

the Forest Spirit’s nocturnal form, the other evening

when my boyfriend and I went a little wayward

on a nature trail after we lost track of time. The sky

was violaceous. The sky was amaranthine and studded

with bats flying more like moths than any bird until

it darkened suddenly as though from under a spilled glass

of wine. Neither of us cared. My legs ached pleasantly.

Sweat drizzled between my breasts. We were alone

in our own minds, in the memories we translate

to each other that’ll always remain slightly mythological,

as in both a solace and a warning. The whole point

of stories. I thought about why the Forest Spirit changes.

When I was young I perceived him as the night sky

within a body that reflects and guards. He was the God

I believed in, watching over us, and I felt righteous

and secure. Now I wonder if he wasn’t doing anything,

just walking around. During the day plants burst

fern-like from his steps. His body, a deer’s with a great

furred chest. Instead of antlers, his head’s a tree

with many branches. His face, a mask with direct eyes

and an omniscient smile. His blood cures wounds

but won’t lift curses. Some acts even a god can’t amend.

Lady Eboshi, I’ve been meaning to ask you for years

now: What did you think was going to happen?

How do you really kill a god? Dark on darkness

surrounding us almost makes us light. A rabbit sounds

larger than it is. Lavender wildflowers glow against

their eclipsed field. I believe a god is every generation.

until they give him back his head. I thought about

how the forest grows again but is never going to be his.

to feel afraid? Maybe the whole point is to feel

neither, to surrender to the story’s end. Movement

even within shadows. We watch deer leaping into night.