Alyse Knorr is an associate professor of English at Regis University and, since 2017, co-editor of Switchback Books. Her most recent book of poems, Mega-City Redux, won the 2016 Green Mountains Review Poetry Prize, selected by Olena Kalytiak Davis. She is also the author of the poetry collections Copper Mother (Switchback Books 2016) and Annotated Glass (Furniture Press Books 2013); the non-fiction book Super Mario Bros. 3 (Boss Fight Books 2016); and four poetry chapbooks. Her work has appeared or is forthcoming in The New Republic, Poetry Magazine, Alaska Quarterly Review, Denver Quarterly, and The Georgia Review, among others. She received her MFA from George Mason University.

I wrote this poem after having a happy hour beer with my friend Erin, who is a professor of psychology and neuroscience at the university where I work. Erin was teaching a class on personality at the time, and we were talking about different theories about where personality comes from and how it’s manifested. She mentioned offhand that the class had been discussing, as a case study, a proposed human head transplant procedure. I immediately latched onto this idea and asked Erin everything I could about it, then started Googling and learning more about how the procedure had already been attempted in dogs and mice, and how there was a surgeon and a volunteer ready to do the human version at any moment (the volunteer has since stepped away from the project).

As I wrote the poem, I kept thinking about the context in which Erin and I had the conversation. It was a beautiful, unusually warm day, and we were sitting out on a patio drinking beer and talking about personality while somewhere out there this mad scientist sharpened his scalpel. This happens to me a lot—I get obsessed with dark or gruesome stories and find my head spinning with constant questions and imaginings that take me out of the moment—out of the beautiful day or the hot shower I’m taking or whatever it might be. I’m very bad at being “present” when I latch onto an idea or an image or a question that fascinates or horrifies me, as was the case here. And so I think this poem explores all those tensions, and with the limits of the human imagination in the face of the truly uncanny or horrific.

I love this question! I’m going to use this space to proselytize one of my favorite TV shows ever, The Leftovers. It’s a supernatural HBO drama that aired 2014-2017 and I think it’s one of the most underrated TV shows of all time. I made my wife watch it, I make all my friends watch it, and I’ve even got a podcast project in the works about it. The central premise of the show is that there is a global event called the “Sudden Departure” in which two percent of the world’s population disappears into thin air. But it’s not a religious rapture kind of situation—no one can figure out where these people went or why. And that’s not really the point of the show either—the point is about following the lives of the people who have been left behind, and how they grieve or try to make sense of the world by joining cults or attempting to restore order or believing in really superstitious stuff. It’s an utterly gorgeous show—form the soundtrack to the writing to the acting—and full of beautiful symbolic mysteries. It’s a show that feels more like a poem to me than a novel. I think about it all the time and each time I watch it I get something new out of it. I should also mention that it’s by the makers of Lost, but they TOTALLY stick the landing—easily the best series finale I’ve ever seen on a show. So there’s some lovely redemption there for those showrunners. 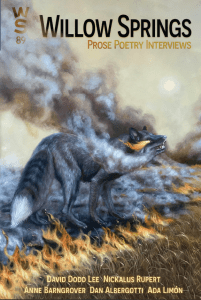 Found in Willow Springs 89 Back to Author Profile   On this very day they are planning it! While I drink a Kölsch called Julia’s Blessing with my beautiful wife who […]