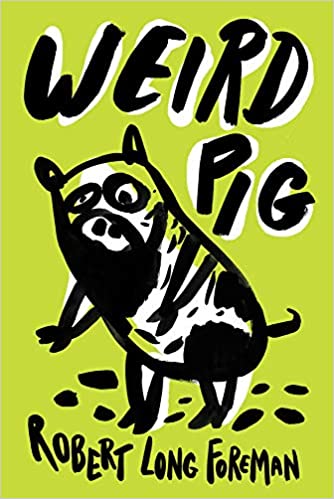 Issue 81 Contributor and 2013 Willow Springs Fiction Prize winner Robert Long Foreman has announced Weird Pig, a new fiction book coming out on October 1st. According to the Southeast Missouri State University Press site, “Weird Pig is about Weird Pig, a pig who wants to do right. But doing right isn’t always easy. He drinks. He eats pork chops. He rides a skateboard. He gets his fellow farm animals murdered, and fathers an illegitimate son who has a messiah complex. When Weird Pig leaves the farm he calls home, he inspires a series of children’s books that help bring on the end of his little world–a farm where human and beast alike toil in the shadow of an ever-growing factory livestock complex. From farm to table and beyond, follow the misadventures of Weird Pig in this kaleidoscopic portrait of America, seen through the eyes of a crazed animal who insists on making himself at home there.”

Erin Somers, author of Stay Up with Hugo Best, writes that “Weird Pig is one of the funniest books I have ever read. Robert Long Foreman has a special talent for capturing the chaos, brutality, and absurdity of life in America. Like Huck Finn meets Animal Farm on acid.” The book has also been awarded the Nilsen Prize.

Weird Pig can be pre-ordered now from the Southeast Missouri State University Press website, and goes on regular sale October 1st. It can also be pre-ordered and purchased via Amazon, as well as from Target’s website and from Book Depository. The original short story that inspired Weird Pig can be found in Copper Nickel magazine.

This is Robert Long Foreman’s third book. You can listen to a reading he did from his second book, I Am Here to Make Friends, here. You can also read his featured story, “The Vinyl Canal”, from Willow Springs Issue 81 here on our site. In addition, his short story “The Man with the Nightmare Gun”, which won the Willow Springs Fiction Prize, is in Issue 82 of Willow Springs Magazine.