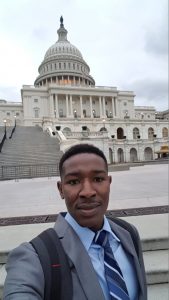 EWU McNair Scholar Abdulrazik (Abdu) Mohammed lived in an Internally Displaced camp in the Sudan for two years as a child, then spent five years in a Kenyan refugee

camp with his family, who had been forced to flee their home due to the ongoing violent conflict in Darfur. “Life was like a prison there,” he says of the camps. “Nowhere to go, few thoughts for the future.” His life changed significantly, however, when he along with several of his family members were granted refugee status, allowing them to emigrate to the U.S. He arrived in Spokane Washington as a teenager, unable to speak English, but determined to do everything possible to make the most of his fortune and to use his opportunities to give back to others. He was enrolled in the Ferris High School English Development Program (ELD) program where he was supported by numerous Ferris ELD teachers, including EWU alumna Mandy Manning ’98, who won the 2018 National Teacher of the Year award. Mr. Mohammed rewarded the support of the Ferris ELD program, along with others at Ferris and in the Spokane community, with his focused hard work.

He awoke each morning at five so he could get to school at six to work on his English and catch up with his high school classmates. He was able to complete the requirement to graduate from Ferris in 2015, doing a freshman year at Whitworth University before transferring to EWU in fall 2016, where he chose to study international affairs. As he has moved through his coursework at Eastern, he became increasingly interested in research and the possibility of going to graduate school, so he applied for the McNair Scholar program. Selected as an EWU McNair 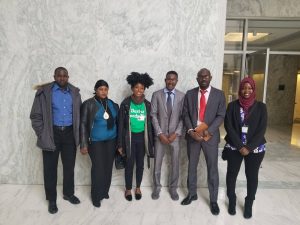 Scholar in March 2018, he conducted a McNair Summer 2018 Internship project: The UN Response to Darfur: Aid, Security and Conflict Resolution, with faculty research mentor, Dr. Dorothy Zeisler-Vralsted, professor in political science. With her encouragement, and the support of McNair travel grant funds, Mr. Mohammed recently attended the 7thAnnual International Symposium on Women and
Genocide in the 21stCentury: The Case of Darfur at the Georgetown University Law Center in Washington D.C. In addition to presenting at the conference on a panel,  met with congressional representatives on Capitol Hill, and was able to meet and have conversations with faculty, researchers and professionals in many fields related to the topic. 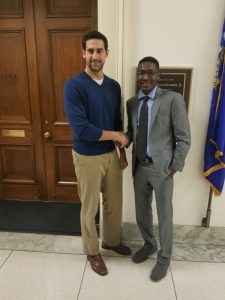 When asked how his EWU international affairs major prepared him for this experience he stated: “Understanding global governance and how it works to solve global problems was beneficial in terms of engaging with like-minded people as well as explaining my research topic. For example, understanding how the International Criminal Court [ICC] works was important. Part of my research includes one of the most controversial criminal case the ICC worked on, the Darfur case. When I met the international persecutor who handled this case, the knowledge and the skills I gained through my EWU major helped me ask the right question and have a constructive discussion with him.”

He believes that all students should try to attend a conference: “It opens one’s mind beyond the imaginable. Whether it is academic or activism and or action-based conference, it is not possible to return without some form of knowledge that would fit your interests. You get an idea of what others are doing and what your undergrad or overall academic experience can contribute in real life. You also gain connections and opportunities that might open your doors to future.”

Always thinking about how he might make a positive difference in the world he adds: “Some of the most important outcomes of getting such an opportunity is building experiences and knowledge to learn how education can be applied to the real world to benefit others.”