In her own words: I am the oldest of three children who grew up in a rural apple-producing town on the Canadian border (population 1,700). My mother and father worked hard to make ends meet; welfare, frequent moves, and wage labor were all part of my adolescence. Graduating from high school in 1993, I enrolled at Eastern Washington University the next fall, where I found myself under prepared for the college experience. Fortunately Eastern’s TRIO Student Support Services provided the foundation to complete my biology degree, and acceptance into the TRIO Ronald E. McNair Scholar Program changed the course of my life. TRIO McNair at EWU is not solely about preparing students for the GRE or helping them write their statement of purpose for graduate school. McNair helped me break down my personal barriers of self-doubt, which haunts all first-generation and low-income students. McNair provided the guidance in application, personal support during my academic journey, and celebration when I finished both my Master’s in Biology (EWU) and Doctorate in Anthropology (WSU).

I recently accepted a tenure-track position working for Lewis-Clark State College where 80% of the student body qualifies for TRIO services. I will continue the TRIO legacy to help guide, support and inspire the next generation of TRIO students.

EWU McNair Scholar alumnus Micheal Callaway was the first person in his family to graduate from college when he earned his bachelor’s degree in English from Eastern Washington University. Although neither of his parents had a high school degree, he credits their support for creating an educational foundation that allowed him to continue through the educational pipeline to earn his PhD, co-author a book on writing, and return to the classroom as English faculty. “My mom earned her GED at the same time I graduated from high school,” he states, “and my dad earned his GED before he entered the military. He was a very educated, self-taught man. They never went to university, but raised me as if I would. I was always being taught, and to value learning, but it didn’t really click with me until many years later when I realized, oh yeah, my parents made me do things other kids didn’t do. So what seemed like a natural ability was really them, because they wanted me to advance.”

His parents provided workbooks and flashcards at home. There were summer reading programs, and even though athletics and after-school jobs took some focus from academics, Callaway’s high school record was strong enough for him to be admitted to EWU. He arrived on the Cheney campus understanding the value of education, but still lacking skills necessary to excel. As a first-generation college student, he was not prepared to do well on the college placement tests, and he tested into remedial English and Math. He was also required to enroll in note-taking, offered through the TRIO Student Support Services program that was then on campus.

“It just so happened that the note-taking class was right across the hall from the office of the Director of McNair [which was Dr. Karen McKinney at that time]. And about halfway through the quarter, the advisor I worked with realized I had more ability than I showed on my tests. She took me across the hall and introduced me to Karen. I learned about McNair, and it sort of started from there.”

The TRIO Ronald E. McNair Postbaccalaureate Achievement Program is one of a national pipeline of federally-funded TRIO programs that provide educational opportunities for students from disadvantaged backgrounds. TRIO McNair focuses on research and scholarly activities to prepare first-generation, low-income and/or underrepresented students for success at the doctoral level. Callaway was accepted into Eastern’s TRIO McNair program once finished his developmental courses and gone on to do well in more challenging classes. As a McNair Scholar, he completed two McNair summer research internships: Transformation of a Collaborative Learning Class with EWU English professor Dr. Paul Lindholdt, and The Journey of the Outsider: At the Beginning of the Life of a Scholar with McNair faculty mentor Dr. LaVona Reeves, professor of English and Women’s & Gender Studies and MATESL Program Director. McNair also provided him the opportunity to attend regional and national conferences to present both projects, and he credits that experience as one of the many ways McNair prepared him for success in his PhD program.

“I got to graduate school at ASU and some of my colleagues had all the credentials, Ivy League schools and all, but McNair had given me the chance to present at conferences, and to work with and develop strong relationships with faculty. So that even though I came from a small school, I had confidence. I felt prepared. My EWU mentors would sometime mentor me overtly, tell me what I should and shouldn’t think about, but also, they sometimes kind of looked at me and would say, ‘Hey figure it out.’ They gave me books to read, and I read them. And they treated me more like an equal than I probably deserved as an eighteen- year-old kid showing up in the summer and asking question and writing papers.” 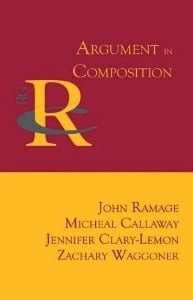 Dr. Callaway is now on the other side of that conversation. After graduating from Eastern, he went on to earn a PhD in Rhetoric and Composition from Arizona State University, doing research on authenticity and identity construction and completing a dissertation titled Authentic Performances: The Paradox of Black Identity. He is now residential faculty (equivalent of tenured) at Mesa Community College, where he teaches developmental and introductory English, as well as literature classes. Mesa is the largest of ten institutions in the Maricopa Community College District in southern Arizona, serving a diverse population of more than twenty-thousand students, over half who are the first person in their family to go to college. Many must overcome a negative view of education, and Dr. Callaway works to get students to make connections between their own lives and how a liberal arts education might be of value to them.

“I teach writing, but I want them to think of writing in terms of communication. It’s thinking about how you would engage with people in your day-to-day life, and using those same skills when you write. So, for example, if you go into a room and you’re going to have a conversation, you don’t just jump in and start talking. First you listen for a little while and figure out what the important parts of the conversation are, and then you contribute. It’s the same thing in writing. You don’t just start writing about something you don’t know anything about. You have to do a bit of reading, understand what’s going on, and then you contribute. I try to get them to think about that, and about the writing they do in their life, because that shapes the way they view communication as much anything.  And a writing class is also a reading class as well. We do a lot of critical reading and talk about current events. I try to get them to pay attention.”

He wants his students to learn to write and communicate in ways that facilitate understanding, not antagonism, and encourages students not to trivialize important issues. From his perspective, part of his job as an English professor is to “try to get my students to see that these issues aren’t really jokes, that the joke is on you if you don’t get that it’s not really a joke. These are important issues to pay attention to, and I try to take two or steps back to really talk about the issues.”

Emphasizing to his students the importance of how to approach their audience, he  reminds them that, “people don’t respond well to being laughed at,” but that “if you can define and talk about the real issue, then that can be something worth addressing and talking about.”

Sage advice for our times.

Edith has been accepted into Penn State. Congratulations Edith!! #TrioWorks 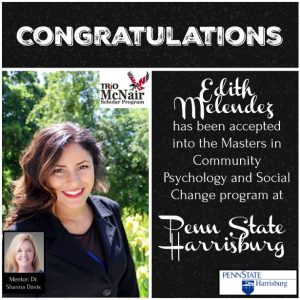