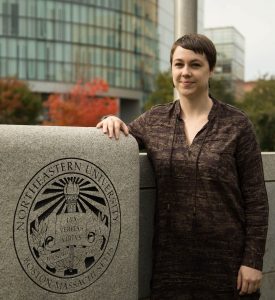 Alicia Peaker is currently the CLIR/DLF Postdoctoral Fellow in the Digital Liberal Arts at Middlebury College. She successfully defended her dissertation, ‘Our English Ground’: Women, Literature, and the Environment, 1900-1950, at Northeastern University in April 2014. During her tenure as a graduate student she organized six graduate conferences and served as the PhD representative and Vice-President of the English Graduate Student Association. She has also worked as the Project Co-Director for OurMarathon: The Boston Bombing Digital Archive, the Project Manager for The WomenWriters Project, and the Development Editor for GradHacker at Inside Higher Ed.

“As a McNair scholar, I had my first experiences with formal mentorship. The summer grant I received from McNair allowed me to focus on drafting a strong writing sample and preparing for the rigors of graduate education while working closely with a faculty mentor. For the first time in my life, I was getting deeply valuable feedback on my research and writing. Perhaps even more valuable to my development as a scholar were my experiences with my cohort. My colleagues came from similar backgrounds but also, like me, were determined to pursue higher education in spite of the barriers. We formed reading groups, writing groups, and general accountability groups to support each other through the grueling PhD application process.

My connection with McNair plugged me into a national network of support unlike any I had experienced before. Recognizing the importance of such networks, I became involved in other communities in graduate school such as the Graduate Consortium of Women’s Studies, Occupy Boston, and the Digital Humanities community. My personal experiences with these diverse networks continually inform both my research and my pedagogy.” 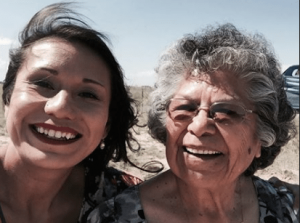 In her own words: “The McNair Program set me on the path in life that I had dreamed of, but did not know how to achieve. TRIO McNair gave me a sense of purpose and drive to work towards the goals that I thought were impossible. Most importantly, the McNair program provided me with unyielding support to realize my goals. Not only did I learn how to prepare a curriculum vita, write a statement of purpose, and learn the scientific rigor of research, the program instilled a confidence within me I did not know I had. This new found confidence allowed me to seek out and capitalize on opportunities that I would have previously let slip by. The program broke down the hidden barriers that minorities often face and fostered an environment of excellence. The McNair program was a family; a home away from home. I am so grateful to everyone in the McNair program, staff and scholars, for all the love and support. My path was forever changed from the first day I was warmly welcomed into the McNair Program.” 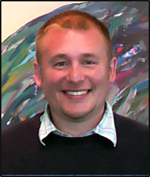 Mr. Panamaroff is an enrolled member of the Sun’aq Tribe of Kodiak, Alaska and a descendent of the Koniag Alaskan Native Cooperation. Prior to joining OweestaJon had spent his professional career in finance and Native American economic development.  He worked as Northwest Zone Credit Manager for the Office of Indian Energy and Economic Development, Division of Capital Investments as well as with the Department of the Interior.  He also was Vice President of Business Development and Senior Commercial Lending Officer at Native American Bank, N.A, as well as a Commercial Credit Card Analyst for Bank of America, and a Project Manager/Lead of the Program Management Office and IDIQ center at Koniag Services, Inc.

Over the last five years Jon has been directly involved in managing or generating over $500 Million of investment capital into Native Communities. This investment went directly to individual Native entrepreneurs, Tribes, Tribally & Alaska Native owned enterprises. At the Office of Indian Energy and Economic Development Jon set himself apart by providing nearly $60 Million of loan guaranties in 2009 to tribal enterprises while working with and visiting many of the 110 Tribes in the Northwest Zone to discuss solutions to Native American enterprise development. This was recognized and Jon was selected for the Department of Interior’s Indian Affairs Leadership Development Program which grooms GS14 &15 managers for Senior Executive Service positions.

As a Vice President at Native American bank Jon serviced his 26 Tribal and Alaska Native Corporation owners by producing much of the bank’s commercial loan portfolio. When leaving the bank Jon was presented with the Best Business Development Officer award.

Mr. Panamaroff completed his Bachelors of Arts in Business Administration and a Bachelors of Arts in Organizational Psychology with departmental honors in both disciplines from Eastern Washington University.  He states his experience as a TRIO McNair Scholar at EWU helped him build a strong foundation for a professional career bringing positive change to Native American communities throughout the country.

Jon also earned a Master’s of Public Administration from EWU, and is currently working on a Graduate Degree of Banking at Colorado where he plans to graduate in June 2012. In 2010, Mr. Panamaroff was recognized by the National Center for American Indian Enterprise Developments “Native American 40 under 40”. 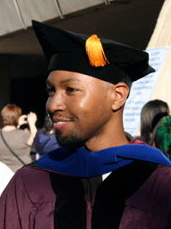 Dr. Micheal Callaway entered the TRIO McNair Program at Eastern Washington University in the summer after his sophomore year, in 1998. He completed a second summer of McNair research in 1999 and worked for the program teaching GRE preparation in the summer of 2000.

In his own words: “I feel very fortunate. I became aware of the McNair Program by accident. Back in the late 90s the McNair Program was located across the hall from the Academic Success Center (ASC), which housed TRIO Student Support Services. One of the advisers in the ASC suggested that I check out McNair. I had an hour to kill before my next class, so I walked across the hall. Those were five of the most important steps in my life. Up until that point, I didn’t have any life plans. I was in college because my parents told me that I had to go. They both had GEDs and couldn’t give me any insights into what the higher education landscape looked like. They just knew that I needed a degree to be successful. The McNair Program put me on track for success. I conducted research under the guidance of tenured faculty in the English department and presented at regional and national conferences.

The TRIO McNair Program even coordinated meetings with graduate schools on the trips to conferences. Meetings with faculty from other graduate programs were invaluable. From those experiences, I realized that my work with McNair set me apart from other undergraduates. Coming from the background that I did, it was easy for me to discount my own achievements. I had conducted research, “so what?” I thought that since my McNair faculty mentors were also my teachers that they praised my work because they liked me. The validation from scholars who didn’t know me helped me see the value of my own work. My McNair advisers didn’t praise my work because they liked me; they saw promise in my work and wanted to support me as I grew into a scholar. Those experiences also taught me not to doubt my ability to make meaningful contributions to my field of study. Most of all, I realized that graduate school was within my reach. I never would have completed a doctorate degree, published articles or published a book if not for the program.” 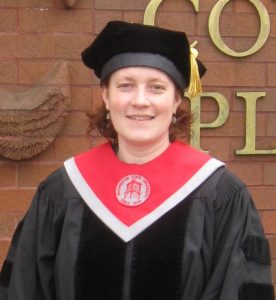 In her own words: I am the oldest of three children who grew up in a rural apple-producing town on the Canadian border (population 1,700). My mother and father worked hard to make ends meet; welfare, frequent moves, and wage labor were all part of my adolescence. Graduating from high school in 1993, I enrolled at Eastern Washington University the next fall, where I found myself under prepared for the college experience. Fortunately Eastern’s TRIO Student Support Services provided the foundation to complete my biology degree, and acceptance into the TRIO Ronald E. McNair Scholar Program changed the course of my life. TRIO McNair at EWU is not solely about preparing students for the GRE or helping them write their statement of purpose for graduate school. McNair helped me break down my personal barriers of self-doubt, which haunts all first-generation and low-income students. McNair provided the guidance in application, personal support during my academic journey, and celebration when I finished both my Master’s in Biology (EWU) and Doctorate in Anthropology (WSU).

I recently accepted a tenure-track position working for Lewis-Clark State College where 80% of the student body qualifies for TRIO services. I will continue the TRIO legacy to help guide, support and inspire the next generation of TRIO students.

During Dr. Martin Meraz García’s junior year at Eastern Washington University, he was introduced to the TRIO Ronald E. McNair Scholar Program. His decision to apply to the program was to have life changing consequences.

In his own words: “The program opened the door to a world I did not know, a world that historically has been only accessible to the elite. As a first-generation, low-income student, who barely knew how to read, write and speak English, TRiO McNair gave me the support and preparation that enabled me to earn a doctoral degree –a degree that allows me to teach at universities, to present my research at national and international conferences and to publish articles in scholarly journals. Most importantly, I am able to mentor students from backgrounds like mine and to encourage them to earn their degrees so that they too, will be able to contribute to their communities.”