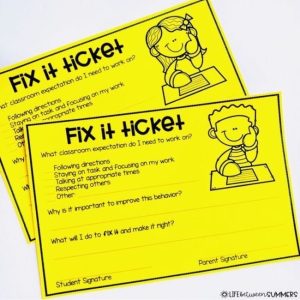 Fix it Tickets are used for students to fix a classroom expectation that they may need help with. The idea is for students to improve their behavior without having to give them repercussions.

The tool should be used for students to be able to fix their mistakes when they do not meet a classroom expectation. The idea behind the “Fix it Ticket” is that students will make a plan for them to improve on their behavior before there are actual repercussion that will happen. This gives students the ability to make a plan on their own and fix their behavior before getting into more trouble. The experience that I have with a similar tool would be a “poor choice” slip that I have seen used before. This has the same idea of giving students the slip in which they would need to fix their behavior, but I feel that the “Fix it Ticket” is a better way to have students make a plan for improvement.

I placed this tool in the Corrective Phase because the idea behind the tool is to correct students’ behavior within the classroom and for them to make a plan and fix what is not right. The idea behind the corrective phase and this tool would be that students would have a conversation with both their teacher and their parents and return to school with a plan. This tool would be in the Teacher Directed Theory because I feel since the teacher would be the one that would facilitate giving these out, it would be best during this phase. The teacher would be the one that is paying attention to student’s actions and deciding whether they would need to receive a Fix it Ticket.