Presented by GSI and the Journal of Business, this year’s 22nd Annual Economic Forecast includes Dr. Grant Forsyth of Avista Corporation, John Mitchell of M&H Economic Consultants, and Dr. Vange Ocasio Hochheimer of Whitworth University, who will delve into “Going for Twelve-Inverted and Shocked” This year’s theme explores the various aspects of our regional and national economy, including regional education.

At this event, several of the Spokane Community Indicators will be presented and discussed as the community discusses the regional economy. Discounted tickets for students are available until November 20th, and cost $20.

Bring your lunch and join us Oct. 23rd, 12-1PM for a quick lunch and learn overview of our indicators projects!

The topic of Dr. Forsyth’s presentation is: Socialism or Capitalism: Lessons for the U.S. in an Era of Discontent

Summary: Between 1989 and the early 2000’s the Czech Republic (part of the former Czechoslovakia) went through a radical economic and political change. In just over a decade, the county shed the economic controls of the communist party; briefly experimented with elements of laissez-faire capitalism during a period of rapid privatization; and then moved back to the economic center with a more mixed economy. The experience of the Czech Republic provides a useful reference point for U.S. voters now confronting calls for increased state control under the banner of socialism.

Biography: Dr. Forsyth is the Chief Economist of Avista Corp. Before coming to Avista in 2012, he was Professor of Economics at Eastern Washington University from 1999 to 2012. Before EWU, from 1996 to 1999, he worked in the Czech Republic as an academic and private sector economist. He received a BA in Economics from Central Washington University (1988), his MBA in Finance from the University of Oregon (1990), and his PhD in Economics from Washington State University (1996). He also serves on the Washington Governor’s Council of Economic Advisors; The Citizen Commission for the Performance Measurement of Tax Preferences; and the Spokane Mayor’s Economic Advisory Roundtable. EWU

Stop by our booth at the annual NeighborFest celebration on Friday, Sept. 27th from 10AM-2PM on the Cheney campus for brochures, materials, and more information about the Institute for Public Policy & Economic Analysis at EWU!

Stop by our booth at Spokane WelcomeFest on Wednesday, Sept. 25th from 3-6PM on the EWU Spokane campus for brochures, materials, and more information about the Institute for Public Policy & Economic Analysis at EWU!

Lunch & Learn: This event helped connect students with our community indicators projects, learn about data, and discuss how data and projects might be applied to both academic and professional projects or pursuits. 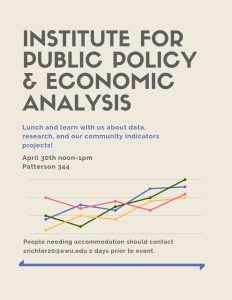