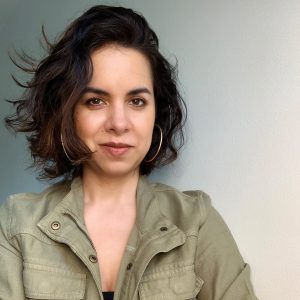 Delondra Mesa is a Latina film, television, and playwright living in Los Angeles. Her critically-acclaimed play Skeleton Stories, a multi-media romp through Day of the Dead, sold out its runs in Hollywood and Sacramento; the play was published by Stage Rights and is currently available at Barnes and Noble. Delondra has written over a dozen movies for networks like Syfy, Lifetime and Hallmark, including Rise of the Zombies (horror,) The Other Wife (thriller,) and most recently Winter in Vail (romantic-comedy.) She spent three seasons writing on the hit Syfy show Z Nation, followed by its popular Netflix spinoff Black Summer. After that, Delondra wrote for two seasons on Step Up: High Water for Starz. Delondra has also been a writer for big-budget franchise movies at Skydance Media and taught tv writing workshops for the interactive art collective Meow Wolf in Santa Fe. Delondra recently wrapped her latest series, Grendel, for Netflix and Dark Horse, and is currently writing on Netflix and Protozoa's new series The Craving.