How did students respond?

Henderson:  I used the template several quarters in a row, although I only did pre and post-tests in Spring 2016. I surveyed my Fall 2016 students at the end of the quarter to get feedback on their perception of the impact of the reading template. While I do believe the template helped students better comprehend their reading, when surveyed at the end of the quarter, they did not attribute their improvement in reading to the intervention but to discussions (which were directly  focused and facilitated by the template).

In fact most students didn’t think their academic reading ability had changed much.  In the end, I did not feel that the survey was very helpful when given months after the intervention, which happened in the first two weeks of the quarter.

In Winter 2017, I decided to ask for feedback in a different way and sooner after using it. Immediately after students used the template a few times, I asked them to freewrite an answer to this question: How did using the template change your reading process, if at all?

I told them their reflections wouldn’t be graded and that there was no right or wrong answer; hopefully this steered them away from telling me what I wanted to hear, but that is always a possibility.  I then looked for concepts or words that appeared frequently in these reflections and coded them into a chart. Most of the students discussed that the template helped them in some way, to focus better, or to better understand the material in some way. A few students commented that it could have been better in some way, or that it didn’t help them much because they already were good readers, or had learned good reading strategies in other classes. The overwhelming response was positive, however. 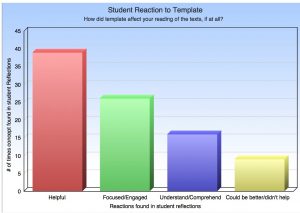 Lambert: My students seem to like our template tool.  A few thought it was unnecessary for them and a few expressed gratitude for the tool and a dependence on it.  I don’t mind the dependence since I think it will translate to an inner understanding of how to look for a thesis and separate it from the supporting material more easily in their future.

Newman:  After creating a scaffold called, “text analysis sheets” that were meant to help my ELLs, and after using them multiple times in class, I sent out a survey to students.  There were 32 students who responded.  The results are below:

Anecdotally, I believe the “text analysis sheets” did focus students better.  One comment I had from a student (paraphrased due to English ability) was, “There is much more to reading than just reading.”