How did you determine the effectiveness of your intervention?

Henderson: At the end of the quarter, I did a post-test that followed the same protocol as the pretest– assigning a reading and asking students to articulate or identify the author’s thesis. This was an attempt to assess student ability to read a text objectively and accurately identify an author’s thesis.   My results are as follows: 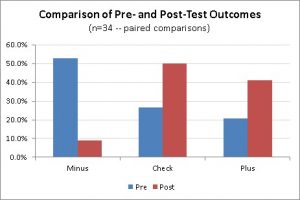 The results were positive in that student ability to articulate/identify an author’s thesis had improved.

After reading pretests, I observed that some students clearly didn’t read the article closely and some students just didn’t have an understanding of “thesis statement.” At the end of the quarter, I knew my  students better and I was surprised to see that some of my best students (high achieving, diligent) got a minus on the pre-test, showing that being an academically successful student doesn’t correlate with their success in identifying a thesis. Perhaps lack of prior knowledge or lack of reading strategies contributes?

After reading post-tests,  I observed that most students understood the nature of a thesis statement– that it is a sentence and not a smattering of ideas or questions. Some students took the thesis directly from the author, which I had always offered as an option, but no one did that in the pre-test. The thesis statements of the post-tests were also written in language that is much more specific. It occurred to me that perhaps students “tried harder” on the post-test because I had been their teacher for several weeks at that point and they had learned that I wasn’t kidding about collecting and actually grading homework. When I assigned the pre-test, they didn’t know me well or how closely I’d look at homework.

Lambert: I took each student’s pre and post test and compared them directly.  One thing I noticed which I did not expect was that students not only identified a thesis more accurately but their responses were worded more confidently.