On November 29, 2018 the EWU ROTC “Fighting Eagles” Battalion hosted a branching ceremony at Cadet Hall on the campus of Eastern Washington University.   The ceremony was held to recognize 14 seniors from the Class of 2019 who recently received notification of their branching assignment in the US Army.  The ceremony was attended by Cadets, alumni, university officials, friends, and family of the Fighting Eagles Battalion. 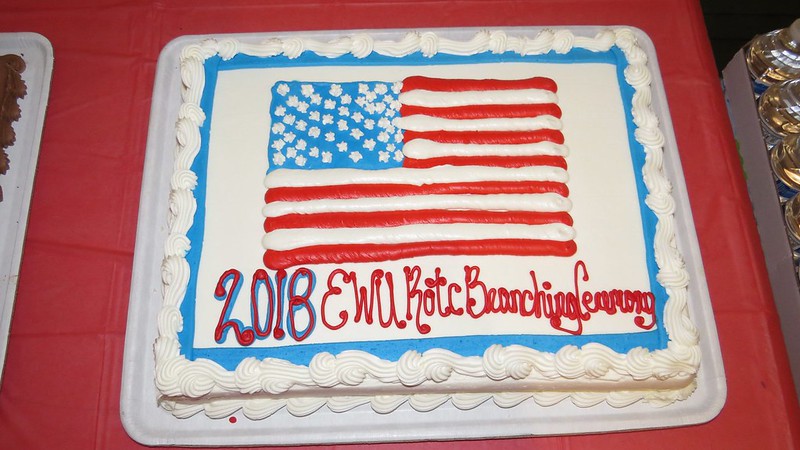 The US Army has 17 different branches for Cadets to compete for.  Being selected into one of the branches is the culmination of an assessment process that begins from the very first day a Cadet enters the ROTC program.  The Army’s accessions process ranks all Cadets across the nation with a score that is based off of factors such as their GPA, physical fitness test score, Advanced Camp performance, volunteer work, Color Guard participation, Ranger Challenge team, etc.  All the scores from these factors are added up to create a national Order of Merit List (OML).  The higher the score a Cadet has, the more likely they will be to receive the branch of their choice.

During the beginning of their senior year, Cadets rank in order of preference which of the 17 branches in the Army they want to assess into.  The Army’s accessions process then uses primarily the OML score and a few other variables to determine which branch each Cadet receives.  This year the EWU Army ROTC program was extremely successful with 11 of the 14 Cadets receiving their #1 branch choice, a 78% success rate.  The Army average this year was 60%, demonstrating the effectiveness of the EWU ROTC program.  The other three Cadets all received branches within their Top 5.

To make the event a little extra special alumni and local service members from each branch that a EWU Cadet accessed into were invited to pin on the branching insignia for the Cadets. 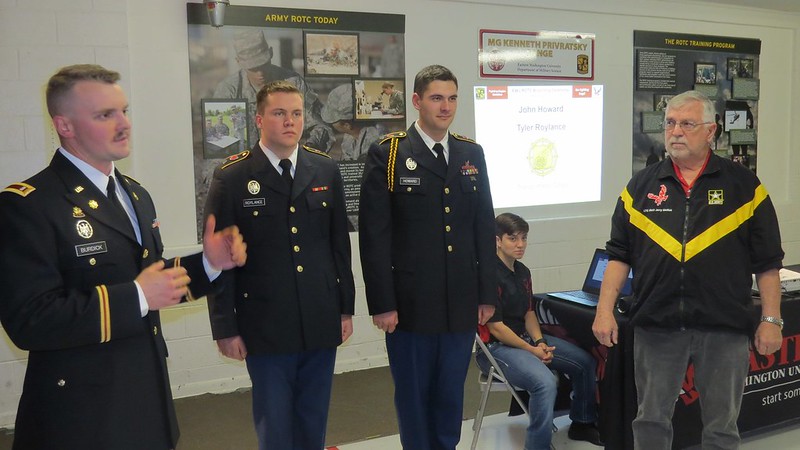 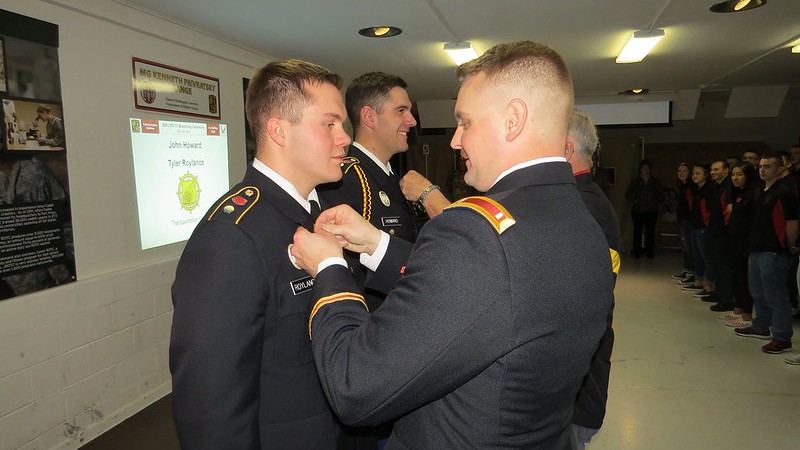 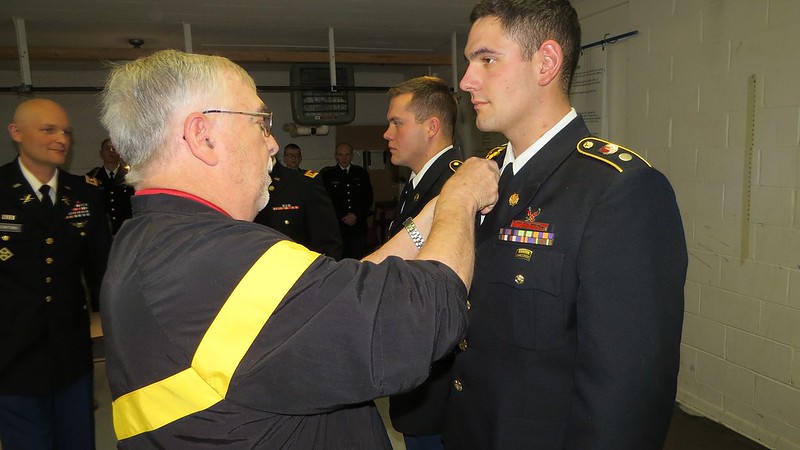 The next Cadet to receive their branch was Tyler Bergman.  Cadet Bergman branched into the Ordnance Corps.  Ordnance officers are responsible for the maintenance of Army weapon systems, ammunition, missiles, and vehicles.  Via a video presentation, Ordnance officer, 2nd Lieutenant Adelphe Jeatsa from the EWU Class of 2018 congratulated Cadet Bergman on receiving his branch and what it means to be a Ordnance officer. 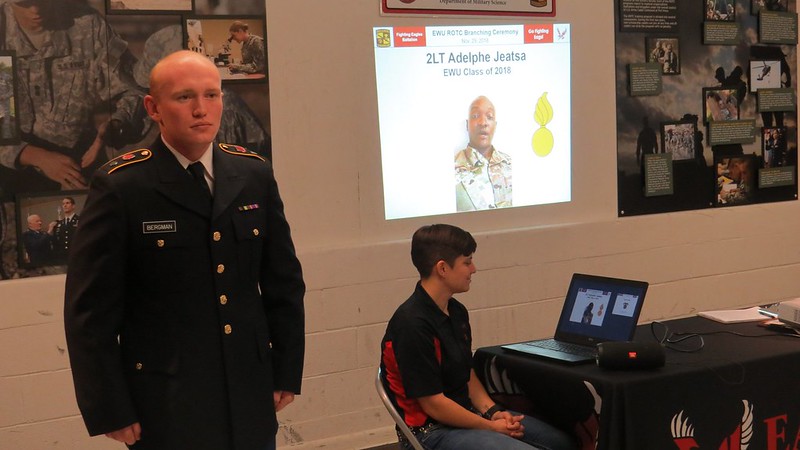 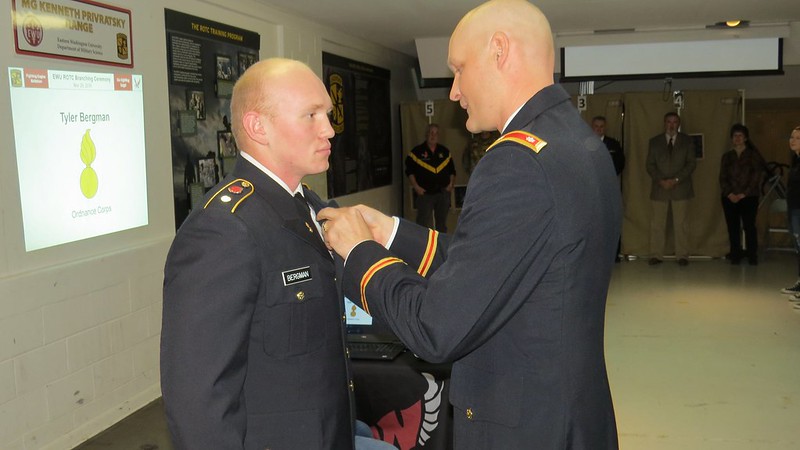 Of the 14 Cadets that received their branches, 13 of them volunteered to serve on active duty.  One Cadet, Ryan Smith volunteered to serve in the US Army Reserve.  Branch accessions for reservists is different from active duty.  A reserve Cadet has to apply and be accepted by a unit to receive their branch.  Cadet Smith was accepted into a Quartermaster unit in Virginia which allowed him to branch into the Quartermaster Corps.  A Quartermaster officer is responsible for providing all classes of supply to troops such as food, water, petroleum, and repair parts. 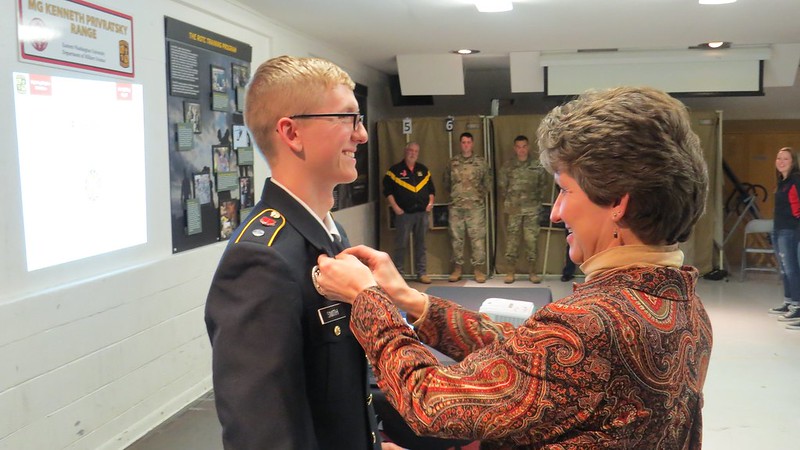 The next Cadets to branch were twin brothers, Kyle and Bryce Stanton followed by Scott Hinshaw into the Infantry.  Branching into the Infantry is the most competitive branches in the Army to be assessed into.  This means that Cadets that want to branch Infantry have to score high on the OML list to receive it.  All three of these Cadets had high OML scores and the Stanton brothers’ score was so high that they were recognized as Distinguished Military Graduates (DMG).  The DMG honor is only given to Army ROTC Cadets ranked in the Top 20% out of approximately 5,500 Cadets across the nation. 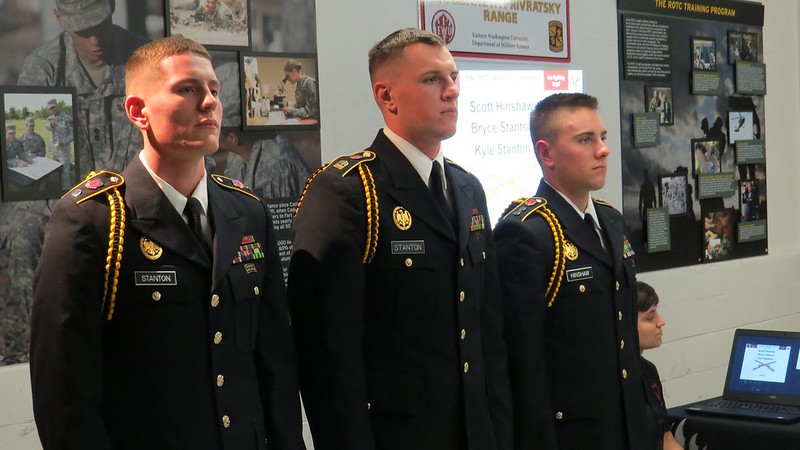 Besides branching into the Infantry Cadet Hinshaw has also branched as a Military Intelligence officer.  What this means is that after serving approximately four years in the Infantry branch, Cadet Hinshaw will transition to become a Military Intelligence officer when he is promoted to Captain.  This is called having a “branch detail” assignment.  This means that Hinshaw was selected to serve in two of the most highly competitive branches for Cadets to receive. 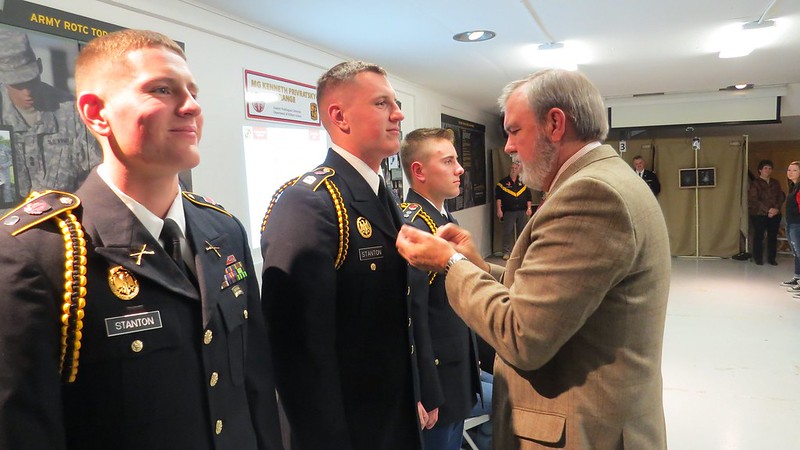 To pin the infantry branch insignia on to the three Cadets was retired Brigadier General Neal Sealock.  BG Sealock is a 1974 graduate of the EWU ROTC “Fighting Eagles” Battalion who branched into the Infantry.  He is also an inductee into the EWU Military Science Hall of Fame at Cadet Hall.  Before pinning the Cadets their branch insignia BG Sealock provided some great comments about leadership and what it means to serve in the Army. 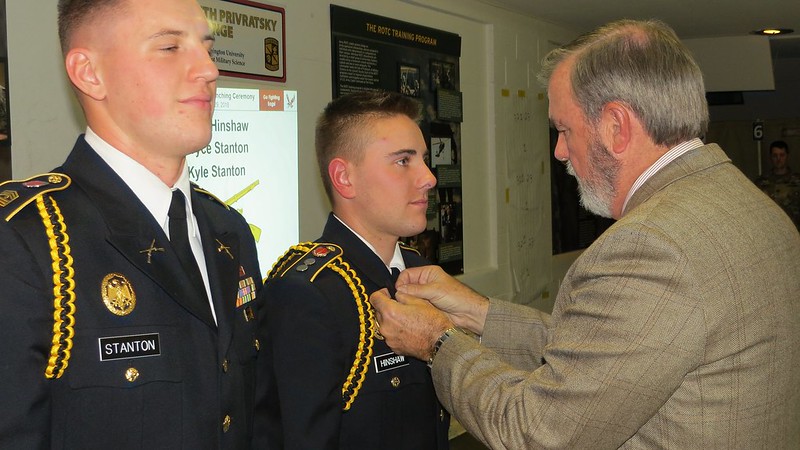 The next Cadet to receive their branch was Jordan Johnson.  Cadet Johnson branched into the Adjutant General Corps.  An AG officer has the important job of managing the Army personnel system that includes unit readiness, awards, promotions, etc.  Via a video presentation, AG officer Major Bonnie Kovatch congratulated Cadet Johnson and provided remarks about the history of the branch and what it means to be an AG officer.  Major Kovatch is the current Professor of Military Science for the Central Washington University ROTC Battalion. 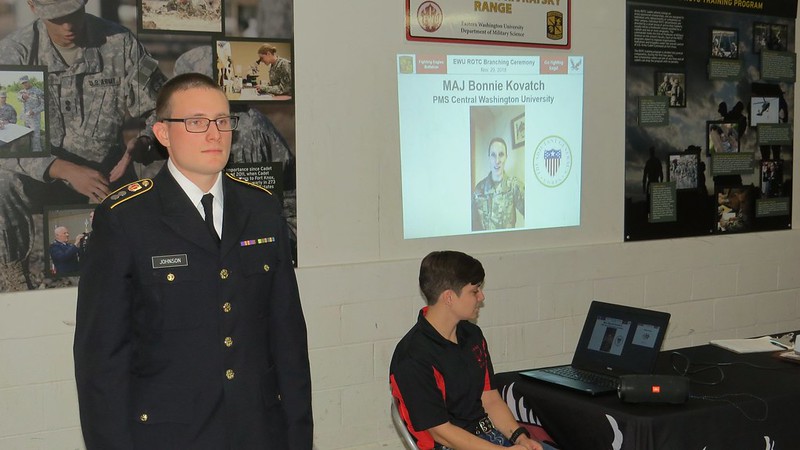 After the video presentation Cadet Johnson had his AG branch pinned on my LTC Stafford. 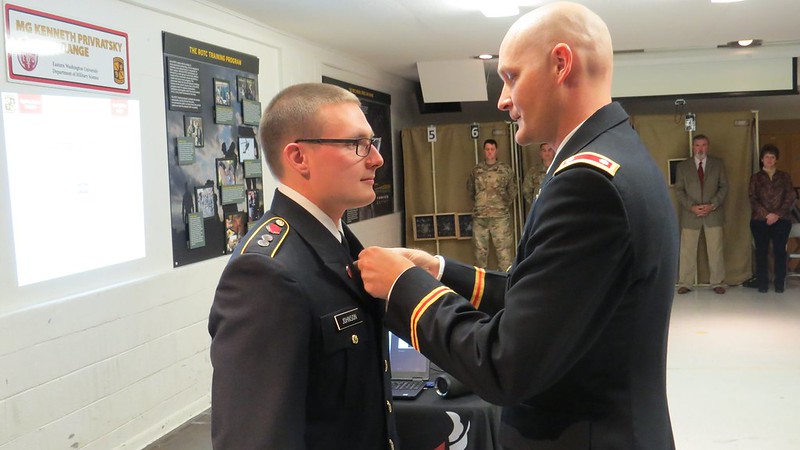 The ninth Cadet to receive their branch was Malisa Barrier.  Cadet Barrier branched into the Signal Corps.  A Signal officer is responsible for providing communications and computer capabilities to Army forces spread across the world.  Via a video presentation, the current commander of the 335th Signal Command (Theater) Brigadier General Nikki Griffin Olive congratulated Cadet Barrier on her selection into the Signal Corps.  BG Griffin Olive is a 1990 graduate of the EWU ROTC “Fighting Eagles” Battalion and is currently deployed to the Middle East. 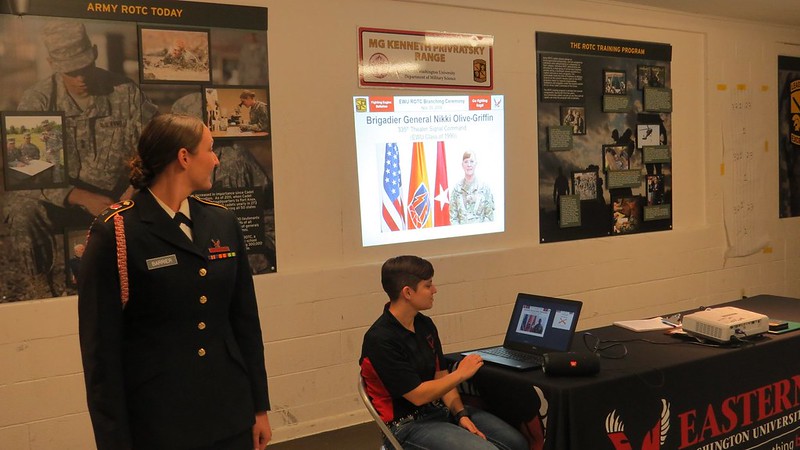 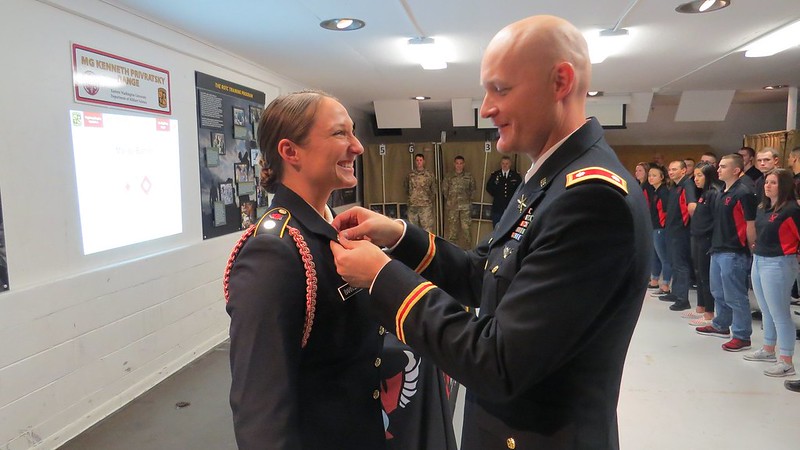 The next Cadets to pin their branch insignia were Cadets Kyle Isaacson and Carly Garland.  Both Cadets branched into the Field Artillery.  A Field Artillery officer is able to employ indirect firepower with cannons, rockets, and missile systems. They are also able to coordinate for supporting fires from air power and naval gunfire. 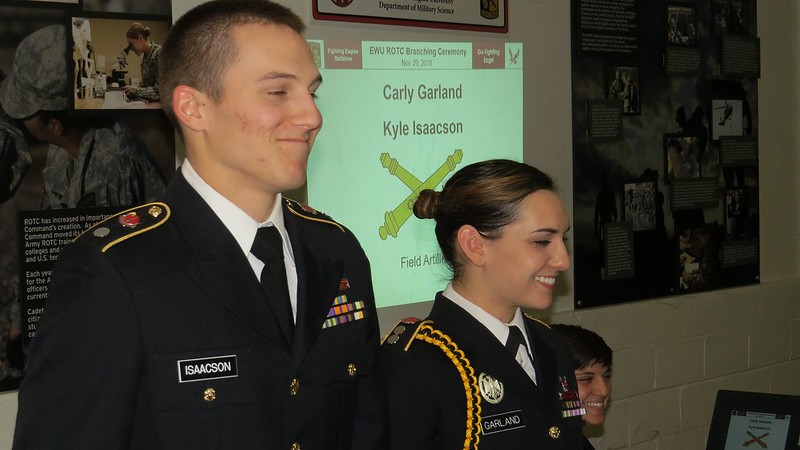 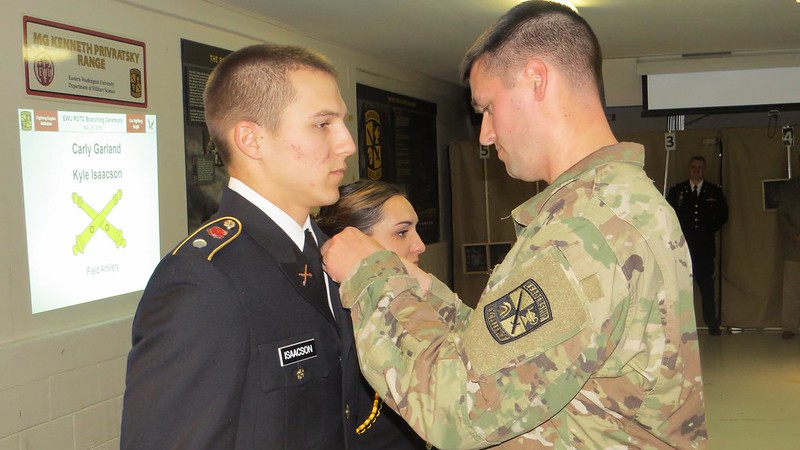 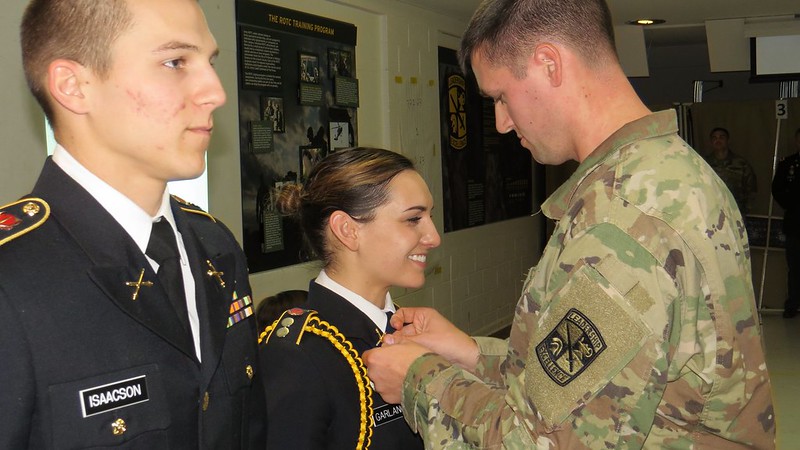 The 12th Cadet to receive their branch was Haley Bent.  Cadet Bent is the Commanding Officer of the EWU ROTC “Fighting Eagles” Battalion.  Cadet Bent branched into one of the most difficult branches to receive Military Intelligence.  A Military Intelligence officer has a wide variety of functions they are responsible for.  An MI officer provides tactical intelligence, counter-intelligence, signals and reconnaissance information to support unit commanders.  Besides branching into a highly competitive branch, Cadet Bent has also been recognized as a Distinguished Military Graduate from the EWU ROTC battalion. 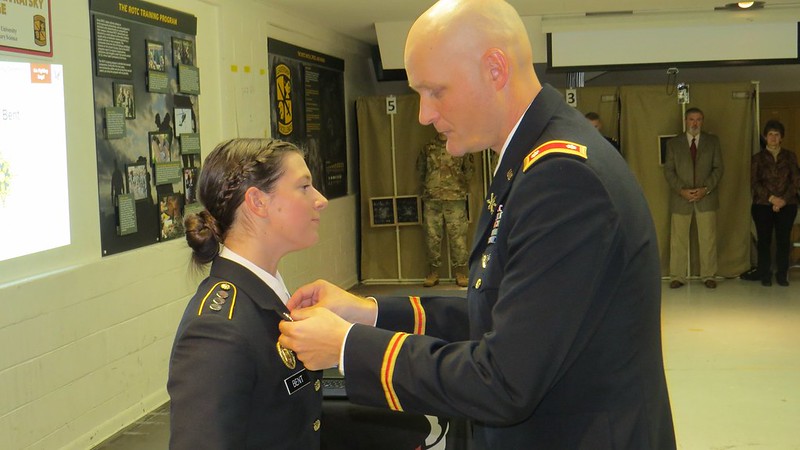 The final Cadets to receive their branch were Cadet Hayley Primm and Candace Madriaga.  Both Cadets branched into the Army Nurse Corps.   An Army Nurse officer serves in military hospitals around the world where they will train and serve in various clinical specialties such as in the Emergency Room, Operating Room, Community Health, etc. 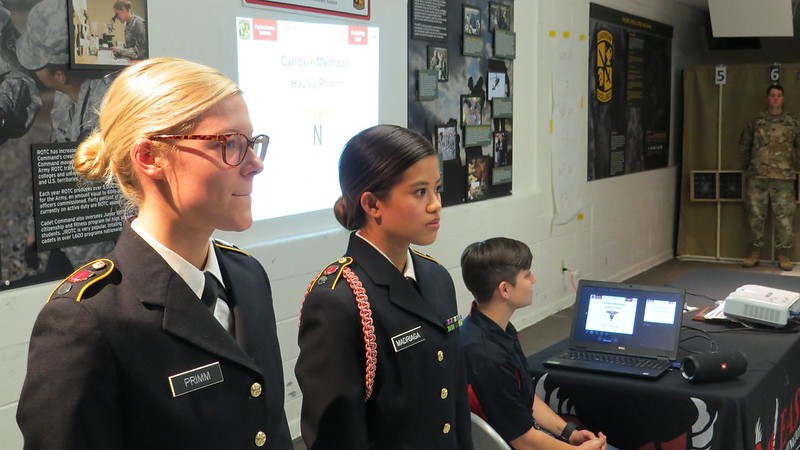 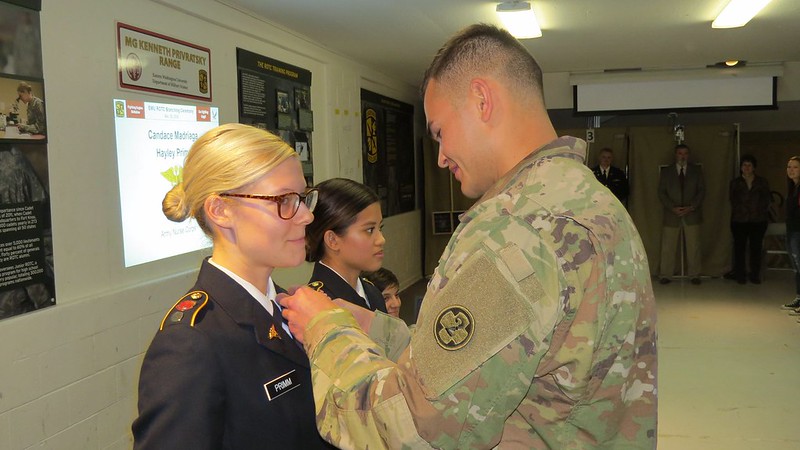 After congratulating both Cadets, 2LT Castro provided advice about what it means to be an Army nurse before pinning on their branch insignia. 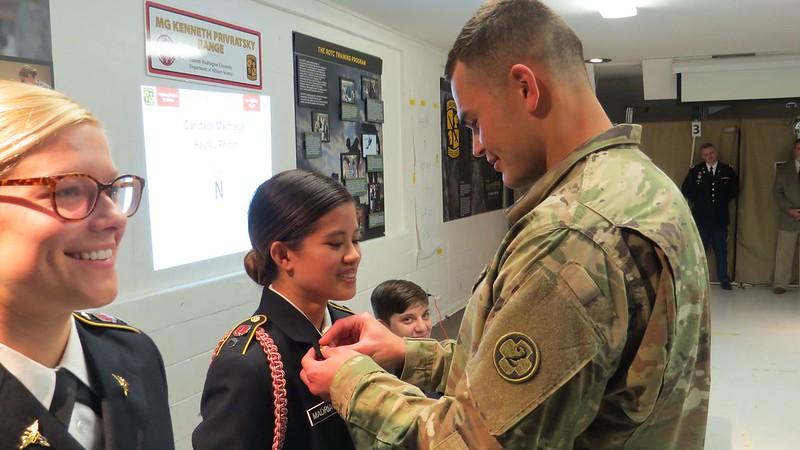 Following the Branching Ceremony the Cadets shared cake and drink with their fellow Cadets, alumni, university officials, friends, and family that attended the ceremony.  It was a great ceremony made possible by the support of the alumni and friends of the EWU ROTC “Fighting Eagles” Battalion.

The EWU ROTC Cadre would like to thank BG(R) Neal  Sealock, LTC(R) Jerry Mellick, LTC(R) Therese Lalley, 1LT Thomas Burdick, and 2LT Nicholas Castro for traveling to Cadet Hall to participate in the pinning ceremony.  We would also like to thank BG Nikki Griffin Olive, MAJ Bonnie Kovatch, and 2LT Adelphe Jeatsa for providing videos congratulating the Cadets as well.  Another thank you goes out to the Dean of the College of Social Sciences, Dr. Jonathan Anderson for attending the event.  A final thank you to Melinda Leen for being the lead Cadet who coordinated the hosting of this great event.