Eastern Washington University (EWU) is the official recipient of grant and contract awards and ultimately is legally responsible to the sponsor for the performance of the funded activities and the proper use of sponsor funds. Externally sponsored projects are subject to terms, conditions, and regulations and may be audited for compliance in accordance with university, state, federal and sponsor guidelines. The project director or principal investigator (PD/PI) is the primary individual responsible for carrying out an externally sponsored activity.

The term “project director” is commonly used in relation to education and public service projects or programs while the term “principal investigator” is commonly used for research projects. Both terms are used interchangeably by the Office of Grant and Research Development (OGRD) and many sponsors. As such, throughout this manual, “PI” will be used to indicate both project director and principal investigator. In the event multiple investigators (Co-PIs) are named in applications for external funding, the university and most sponsors require that one individual be designated as the primary or lead investigator. Both the university and the sponsor designate one individual as ultimately responsible for the conduct of a sponsored project. If co-investigators are named on an application without identifying an individual as the lead PI, the person listed first is considered the lead PI by the university and the sponsor. The National Science Foundation (NSF) defines the Principal Investigator in its Proposal and Award Policies and Procedures Guide (PAPPG) as follows:

“the individual(s) designated by the proposer, and approved by NSF, who will be responsible for the scientific or technical direction of the project. NSF does not infer any distinction in scientific stature among multiple PIs, whether referred to as PI or co-PI. If more than one, the first one listed will serve as the contact PI, with whom all communications between NSF program officials and the project relating to the scientific, technical, and budgetary aspects of the project should take place. The PI and any identified co-PIs, however, will be jointly responsible for submission of the requisite project reports.”

Each expense charged to the sponsored award must be directly related to the project, reasonable, allowable and allocable under the terms and conditions of the award, and be included in the sponsor-approved budget. The university is responsible for maintaining adequate fiscal controls and ensuring that fiscal policies are applied consistently. The State of Washington conducts annual audits of the university in accordance with Uniform Guidance Title 2 CFR Chapter II Part 200 Uniform Administrative Requirements, Cost Principles, and Audit Requirements for Federal Awards Subpart F – Audit Requirements and all awards are included in this audit. Any award is subject to an in-depth audit by state appointed auditors. The university cannot meet its responsibilities to the sponsor unless the PI meets his/her responsibilities. Therefore, management of externally funded projects is truly a partnership between the PI and the OGRD. 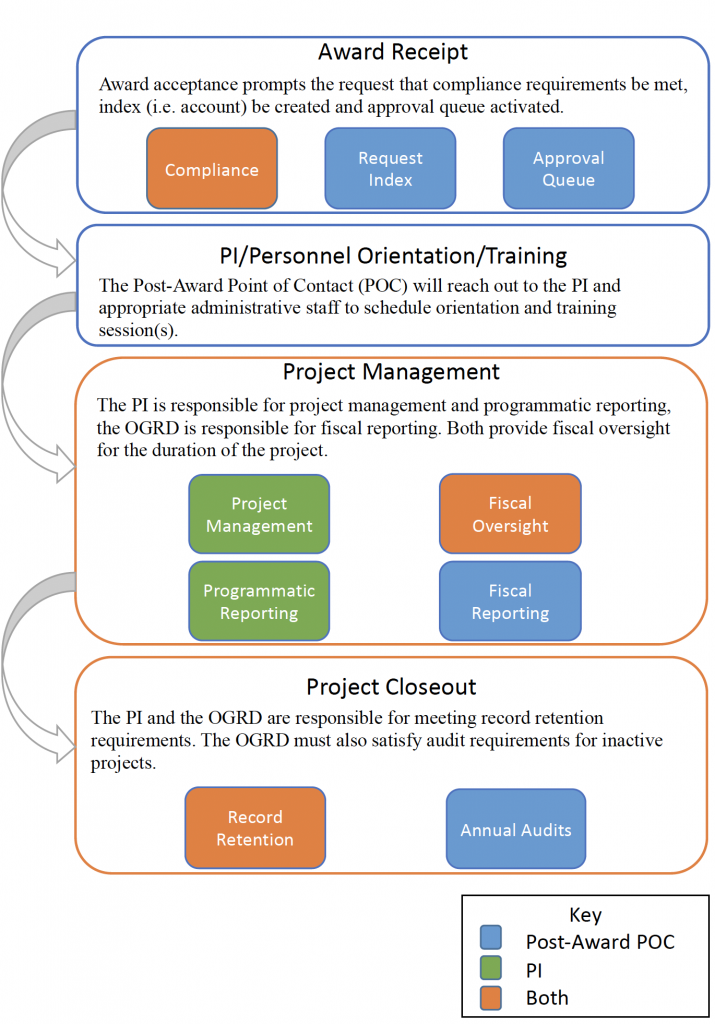