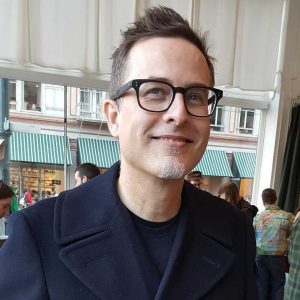 Greg Gerding is a noted underground writer, editor, and publisher. He is the author of seven books: five books of prose poetry (Poetry In Hell, The Burning Album of Lame, Loser Makes Good, Piss Artist, and The Idiot Parade), a collection of essays (Venue Voyeurisms), and his most recent book, I’ll Show You Mine (The Sager Group, 2013), is an oral history on the subject of intimacy.

Gerding founded the University of Hell Press in 2005 as a self-publishing brand and then expanded it to publishing other writers beginning in 2012, launching a platform for unconventional artistry. Since 2012, the press has published over 30 books. Born in Kentucky, Gerding has lived and/or worked in nearly every city in America, currently residing in Portland, Oregon. He is also the Editor-in-Chief of The Big Smoke America.