Cheney began as a train depot, undergoing several name changes until settling on its current name, attributed to Benjamin Pierce Cheney, a Director of the North Pacific Railroad. Cheney donated the funds necessary to establish the Benjamin P. Cheney Academy which could be attended for an annual tuition of $30 (Corley, 2016).

As Washington was not a state until 1889, funding was not available outside of private donations . However, in 1889 funding was given to build a State Normal School, which would offer instruction to prospective teachers for the the Eastern Washington region (From Pioneers to Present Day, 2015).

As the school grew, Cheney grew and built along the side of the railroad (lending Cheney its long and narrow shape). One walk which we hope you can take has been walked by the freshman since the establishment of the State Normal School in 1889, beginning from the railroad tracks and ending at the stairs of Showalter Hall. After students disembarked the train they would walk up College Avenue and through the Herculean Pillars; a celebration which is continued to this day each fall.

By 1937 subjects were added to the courses, and the school became known as Eastern Washington College of Education. EWU would once again evolve into Washington State University, garnering the necessary approval in 1977 (Corley, 2016). From humble beginnings, Eastern Washington University now offers more than 100 fields of study.

Cheney is a welcoming small town, rich in history and with a number of historic, preserved sites to visit. Cheney is just a short drive from Turnbull Wildlife Reserve, a beautiful landscape which offers a hiking trail, site seeing and learning opportunities. There are also several lakes in the area.

If you prefer a large city, Spokane is 20 minutes away by car. 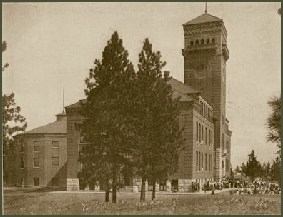 From pioneers to present day. (2015). Retrieved from http://www.cityofcheney.org/index.php?section=about-pioneer-history